1916
Simple Strategies Towards Lowering the Activation Potential of Electrochromic Devices. Case Study on TiO2-Viologen Based Displays

Conference Room 4E (Hilton Chicago)
L. Manceriu, A. Danine, M. Da Rocha, and A. Rougier (CNRS-Univ. Bordeaux, ICMCB)
The purpose of this study is to demonstrate the easy tuning of the activation potential of electrochromic devices (ECDs) by varying the nature of the electrolyte and counter electrode. For this purpose ECDs with a simplified configuration were fabricated (i) by using TiO2-viologen deposited on Transparent Conducting Oxide (TCO) as electrochromic active layer (EC1) and (ii) by replacing the counter electrode consisting of an electrochromic material and a conductive one (EC2/TCO) in a traditional 5-layers battery type ECD (TCO/EC1/electrolyte/EC2/TCO) by a metal electrode.

Firstly a comparison is made between polymer membrane and aqueous gel electrolytes with varying compositions, focusing on the influence of ionic conductivity on the contrast and the switching time. Low toxicity aqueous based gel electrolytes were prepared from gelatin, glycerol, and NaCl/LiCl as ion precursor, whereas the polymer membrane electrolyte consisted of 0.3M LiTFSI in BMITFSI with 40% PMMA. At the end of our study we have investigated the influence of the metal counter electrode nature, more precisely the type of metal and its surface morphology, on the devices response time and optical modulation.

The use of an aqueous gel electrolyte (~10-3/-2 S/cm) instead of a membrane electrolyte (~10-4/5 S/cm) leads to lowering the working potential window; ECDs are colored at -0.5V and bleached at 0V (Fig. 1), turning from blue to white in few seconds. Also, higher contrast (DR) and shorter coloration (tc) and bleaching (tb) times are reached for electrolytes exhibiting higher ionic conductivity (σ). The morphology of the metal electrode influences mainly the coloration kinetics, and the difference is more obvious for the electrolytes with lower ionic conductivity (Fig. 1). 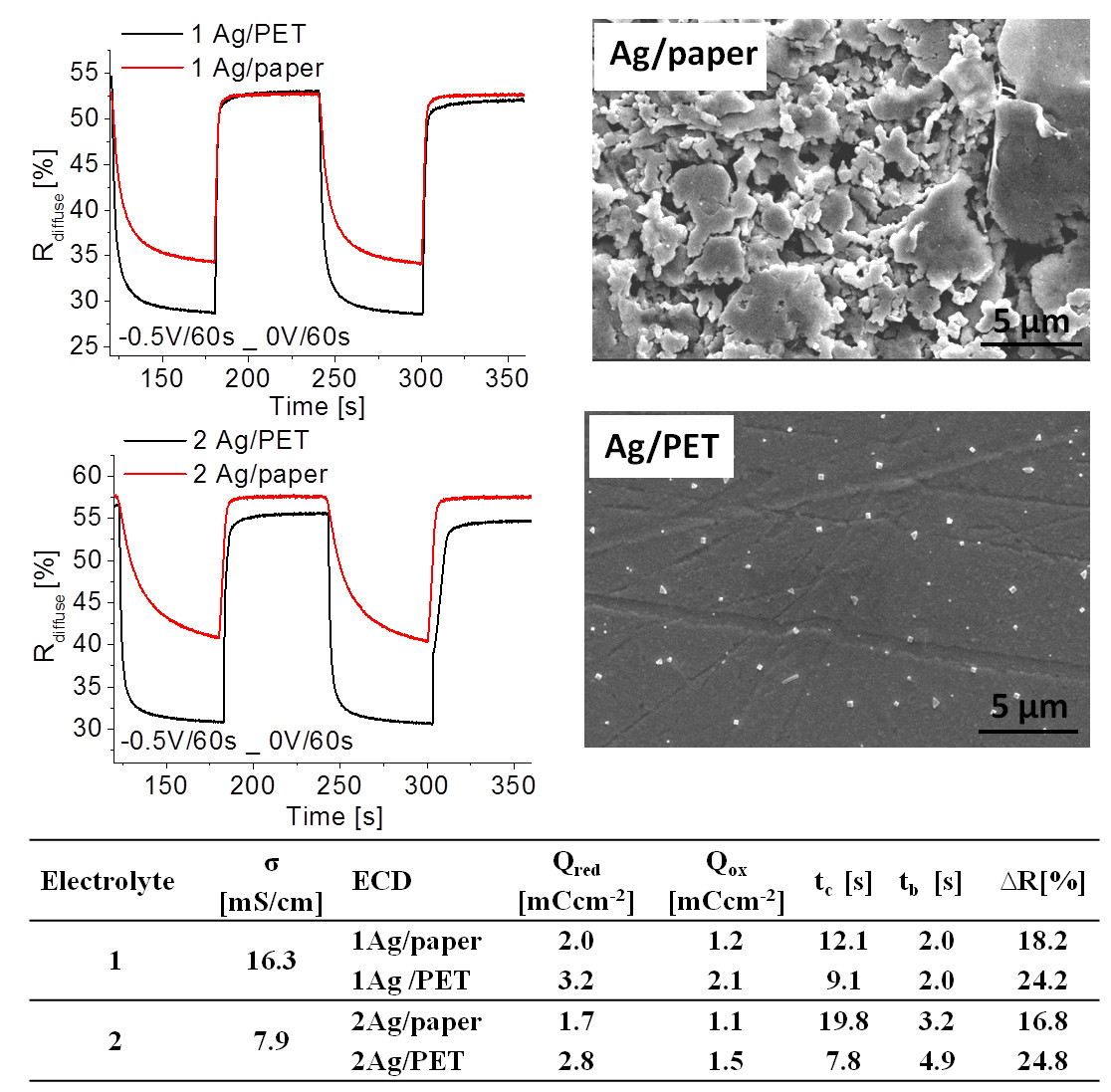