Salon C (Hilton Chicago)
K. Tsunashima, Y. Sakai (Wakayama National College of Technology), and M. Matsumiya (Yokohama National University)
Room-temperature ionic liquids (RTILs) have been developed for a wide variety of electrochemical applications due to their unique physicochemical properties such as favorable solubility of organic and inorganic compounds, relatively high ionic conductivity, no measurable vapor pressure, high thermal stability, low flammability, etc. Another advantage of RTILs is a designability of the chemical structures. Although many kinds of RTILs have been already investigated, interests in phosphonium RTILs have been increasing for their considerable advantages such as chemical and thermal stabilities. Recently, we have designed and proposed several RTILs based on quaternary phosphonium cations together with a bis(fluorosulfonyl)amide (N(SO2F)2-, FSA) anion.1 We also reported several phosphonium RTILs containing unsaturated carbon-carbon bonds in combination with a bis(trifluoromethylsulfonyl)amide (N(SO2CF3)2-, TFSA) anion.2 In this work, we demonstrate the physicochemical characterizations of the RTILs based on quaternary phosphonium cations containing an allyl group (Figure 1) together with a FSA anion.

The preparation and purification of phosphonium RTILs were carried out according to the procedures described in our previously published papers.1,2 The phosphonium RTILs were prepared by aqueous ion exchange reactions of the precursor phosphonium bromides with lithium TFSA or potassium FSA. The resulting crude RTILs was extracted by dichloromethane, and then purified by washing with pure water several times until no residual bromide anion was detected with the use of AgNO3. The RTILs was dried under high vacuum for at least 8 h at 100 ◦C prior to use. The physicochemical and electrochemical properties such as conductivity (ac impedance method), viscosity (cone-plate type viscometer), density, melting point (DSC), thermal decomposition temperature (TGA) and electrochemical window (linear sweep voltammetry, LSV) were measured under dry argon atmosphere.

Table 1 summarizes the physicochemical properties of the allyl-based phosphonium RTILs together with a FSA anion. When an allyl group was introduced into an alkyl chain of the phosphonium cation, such phosphonium RTILs exhibited lower viscosity and higher conductivity than the corresponding unsubstituted phosphonium RTILs. Similar results were obtained in the case of TFSA-based phosphonium RTILs.2 In this series of RTILs, P111(Al)-FSA showed the highest density, lowest viscosity and highest conductivity because of its smallest cation size. In addition, it was found that each RTIL showed lower melting point than that of the corresponding TFSA-based RTILs. This finding reveals that the combination of the phosphonium cations with FSA anion expands the temperature range of the RTILs. The electrochemical analysis by using a LSV technique suggested that the electrochemical windows tended to be somewhat reduced by introducing an allyl group; however, lithium deposition and dissolution in the RTILs was possible. The influence of the introduction of an allyl group on the thermal stability of the RTILs will be also reported and discussed. 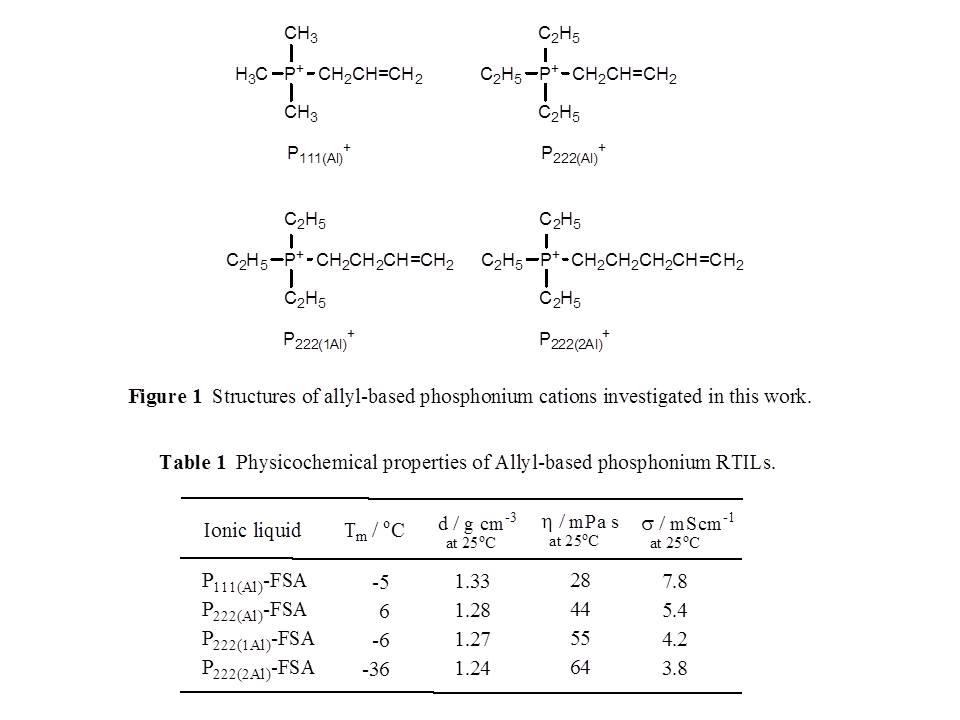