Salon C (Hilton Chicago)
P. Trinh, S. Malkhandi, A. K. Manohar (University of Southern California), A. Manivannan (U.S. Department of Energy), G. K. S. Prakash, and S. R. Narayan (University of Southern California)
Energy storage is essential for large-scale integration of renewable energy such as solar and wind into electricity generation. Fuel cells and metal-air batteries are promising technologies for grid-scale energy storage owing to their high energy densities and environmental compatibility. However, it is well known that the slow kinetics of the oxygen reduction reaction (ORR) at the cathode limits the efficiency of these fuel cells and metal-air batteries. Among transition metal oxides calcium-doped lanthanum cobalt oxide is one of the promising catalyst for ORR because of the ability of these materials to support oxygen evolution and oxygen reduction reactions [1]. In previous work, we demonstrated that in transition metal oxide–carbon composites catalysts, carbon is the primary electrocatalyst for the two electron electro-reduction of oxygen to hydrogen peroxide and the transition metal oxide decomposes the hydroperoxide to generate additional oxygen [2]. Therefore we have aimed at understanding the role of mixed metal oxides on decomposition of hydrogen peroxide.

Manganese-substituted compounds of the formula La0.6Ca0.4Co1-xMnxO3 compound with x value = 0.0, 0.1, 0.3, 0.5, 0.7 and 0.9 were synthesized by the sol-gel method using citrate route. As previously described [3], a two-step sintering method was employed for the synthesis of these compounds. In the first step the material subjected to controlled combustion at 120-170 oC, then the material was collected, ground and heat-treated in a second step sintering process at 700o C for 2 hours.

The ability of transition metal oxide to decompose peroxide was studied using a ring disk (coated glassy carbon) electrode, and also by direct measurement of decomposition rate of peroxide, and by steady state polarization studies of  oxidation and reduction of hydrogen peroxide.

The ORR activity mass-normalized kinetic current at -100 mV (vs. reference Hg/HgO 20% potassium hydroxide) and the percentage of H2O2  at the ring for various values of manganese content are shown in Figure 1. The poster presentation will discuss these results.

Fig. 1 Mass normalized kinetic current for oxygen reduction reaction on La0.6Ca0.4Co1-xMnxO3 compounds at -100 mV (vs. Hg/HgO 20 % KOH) and percentage of H2O2 at the ring in 1 M KOH solution for various fractions of manganese.

The work presented here was funded by ARPA-E Grids Program (DE-AR0000136), the University of Southern California and the Loker Hydrocarbon Research Institute. 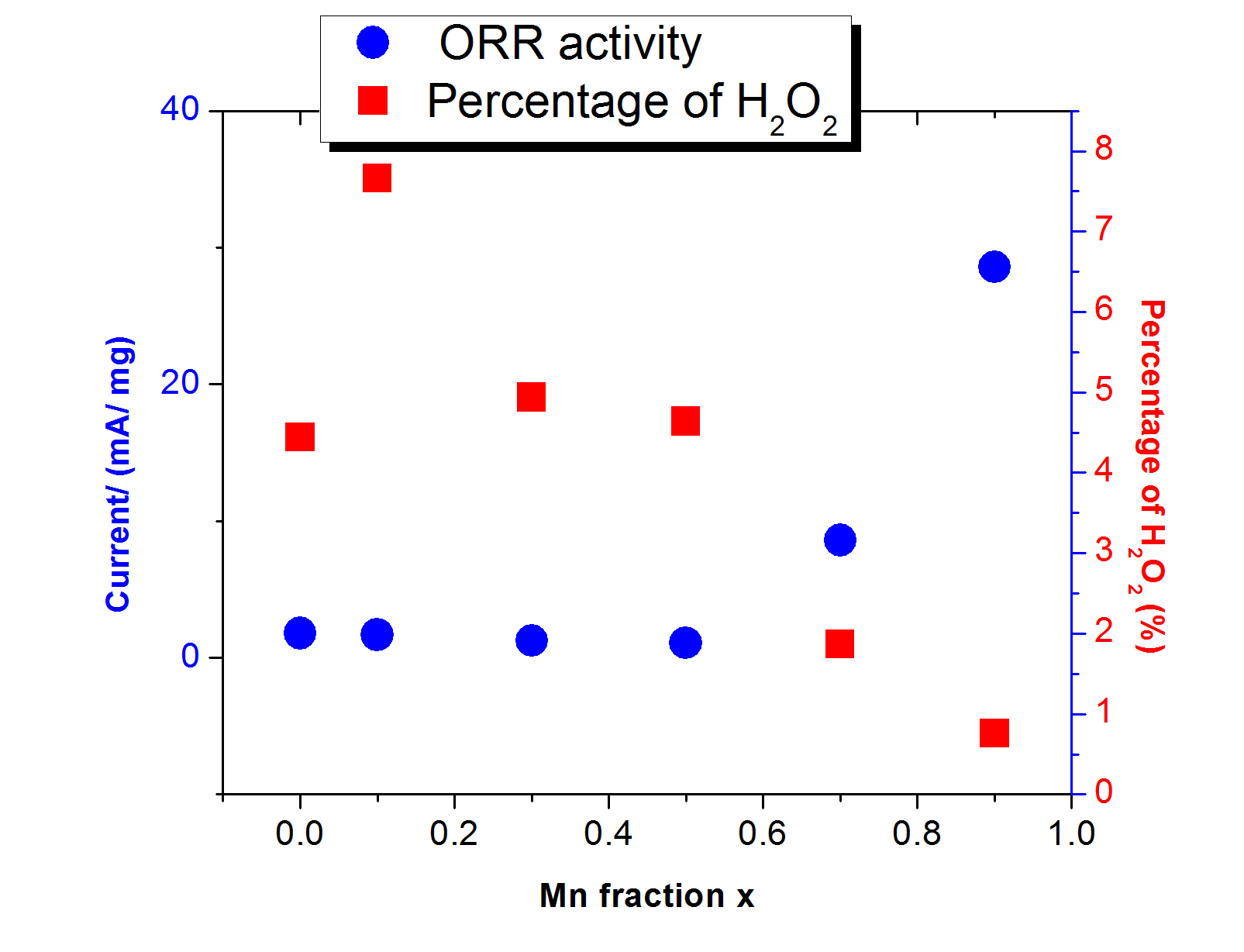