Lake Erie (Hilton Chicago)
N. Chaudhri, N. Grover, and M. Sankar (Indian Institute of Technology Roorkee)
Asymmetrically meso-substituted porphyrins constitute a promising group of nonlinear optical (NLO) materials due to high nonlinearities upon irradiation with high intensity laser light.1a The major advantage of porphyrins is their chemical versatility which provides a tool for tailoring the linear and NLO properties for specific applications.1b Particularly, push-pull porphyrins have potential applications in nonlinear optics, photodynamic therapy (PDT),1c and dye-sensitized solar cell (DSSC).1d Meso-substituted push-pull porphyrins have been widely explored due to their ease of synthesis and facile functionalisation whereas limited reports on β-substituted push-pull porphyrins, probably due to limited synthetic methodologies. But it is found that the effect is more pronounced for β-substitution as compared to meso-phenyl substitution. Herein, we report the synthesis, structural, phtotophysical and electrochemical redox properties of two new families of asymmetrically β-substituted porphyrins.2

The crystal structure analyses and DFT fully optimized geometries of MTPP(NO2)X6 and MOPP(X)Y2 revealed highly nonplanar saddle shape conformation. Notably, nonplanarity of porphyrin core was controlled and modified by varying in size, shape, number and electronic nature of β-substituents.2 These porphyrins exhibited a dramatic red-shift in their B and Qx(0,0) bands as compared to MTPP(NO2) and MOPP. We have also utilized some of these electron deficient nonplanar free base porphyrins for the detection of various anions.3

Figure 1. Molecular structures of β-substituted porphyrins and their metal complexes.

To determine the influence of macrocyclic nonplanarity and the combined effects of electron-donor and -acceptor groups at the β-pyrrole positions, we examined the electrochemical redox properties of these porphyrins by cyclic voltammetric studies. Data analysis of free base and metalloporphyrins revealed the following important facts: (1) the redox tunability was achieved by introducing electron donors (Ph, Th, and CH2OH) and acceptor groups (NO2, CHO, PE, Br and CN) on MTPP or MOPP back bone as evidenced from a fairly broader range of first ring redox potentials and σ values of these porphyrins. (2) Notably, we could detect the unusual metal-centered oxidation of NiII to NiIIIdication radical in NiOPP(R)X2 (X = H, CHO and CH2OH) due to highly nonplanar conformation as well as electron rich porphyrin

π-system4 is strongly influenced by nature of β-substituent (Figure 2) which is demonstrated for the first time.2b The reversible metal-centered redox behavior of CuII/CuIII in CuOPP(NO2)(CN)2 is due to modulated HOMOs (dx2-y2 situated above a1u and a2u).2b The significant shift in redox potentials of these porphyrins are interpreted in terms of both an inductive and resonance interactions of susbtituents on porphyrin π-system as well as nonplanarity of the macrocycle. By means of β-pyrrole mixed substitution on the porphyrin macrocycle, we were able to achieve remarkable bathochromic shift in electronic spectral bands, higher ground state dipole moment, varying degrees of nonplanarity, and tunable electrochemical redox properties with dramatic reduction in HOMO-LUMO gap (Figure 3). 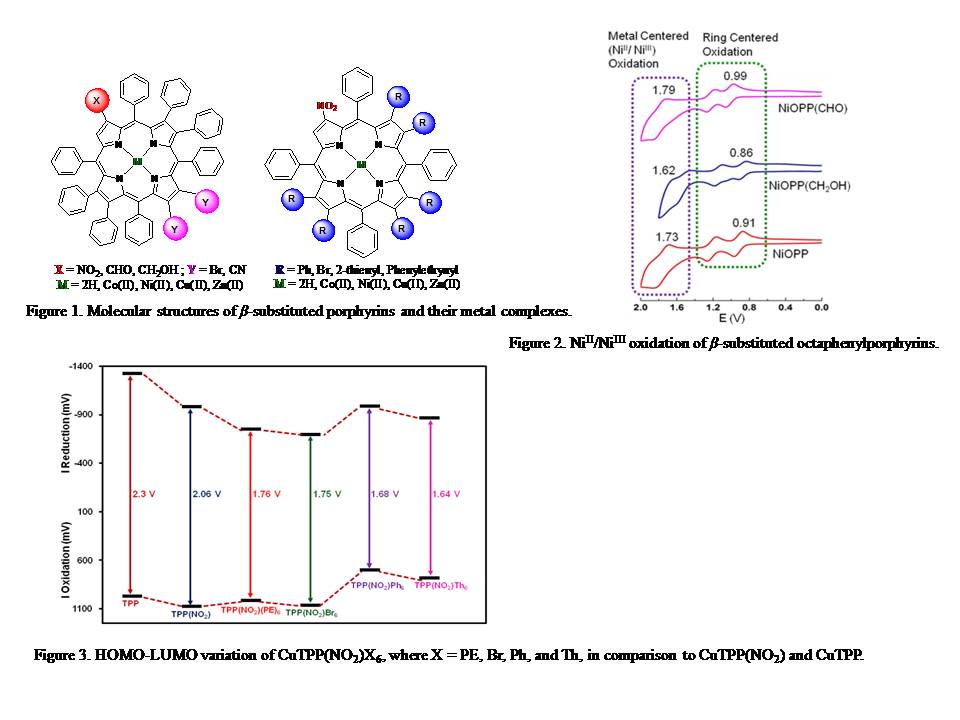