Salon A-3 (Hilton Chicago)
L. Monconduit (RS2E, ICG-Montpellier), A. Darwiche (ICG-Montpellier, RS2E), L. Stievano (RS2E - CNRS FR3459, ICG-Montpellier), M. T. Sougrati (Réseau de Stockage Electrochimique de l’Energie, ICG-Montpellier), H. Martinez (IPREM-ECP UMR CNRS 5254, RS2E), L. Bodenes (IPREM), and B. Fraisse (ICG-Montpellier)
Na-based storage systems working at ambient temperature have lately regained interest. Recent research on Na-ion systems was focused on the development of negative electrode materials, firstly based on the insertion of Na into hard carbon structures able to develop a capacity as high as ~300 mAh/g.[1] However, the large ionic radius of Na with respect to Li leads to a higher volume expansion upon cycling, which is expected to strongly affect insertion as well as alloying or conversion reactions. Surprisingly, Sn- and Sb-based electrodes have shown to be viable alternatives to hard carbon, providing very interesting performances with reversible capacities largely exceeding 400 mAh/g.[2-4] We have investigated several phases containing P, Sb and/or Sn as electrode materials for Na batteries. Electrodes based on bare commercial antimony or on ball milled SnSb can sustain over 150 cycles at C/2 vs. Na without any capacity fading.[5-6] More recently we investigated also potential conversion materials such as FeSb2.[7,8] The thorough investigation of both mechanism (through in situ XRD and Mössbauer spectrometry, Fig. 1-a, -b) and performances of FeSb2will be presented and compared to Sb (see Fig. 1-c, -d).

Fig. 1: a) Operando evolution of the XRD pattern, b)57Fe Mössbauer spectra at 5 K of  the FeSb2/Na battery, c) composition-voltage profile and d) capacity retention for FeSb2/Na and Sb/Na measured at at 300 mA/g.

The good electrochemical performances of such electrode materials are very surprising if one take into account the huge volume expansion expected from the reaction with Na (200-400 %). An XPS analysis will be presented to compare the solid electrolyte interphase (SEI) formed in the Sb based battery versus Li and Na. To understand the origin of the better performance of Sb-based electrodes i) vs Na than vs Li X-ray Photoelectron Spectroscopy (XPS) and electrochemical tests have been carried out to carefully investigate the chemical composition of the SEI layer formed at the Sb electrode surface in the Li- and Na-system.

Surface analysis was performed by a combined XPS core peaks and quantification data analysis to establish the main components of the Solid Electrolyte Interphase film (SEI). The key observation is that the thickness of the SEI layer is strongly related to the nature of the polymer binder used in the formulation and that its chemical nature is different in Li and Na batteries. Much favorable SEI in the case of Sb-CMC/Na seems to participate to the excellent performance of this electrode.[9] 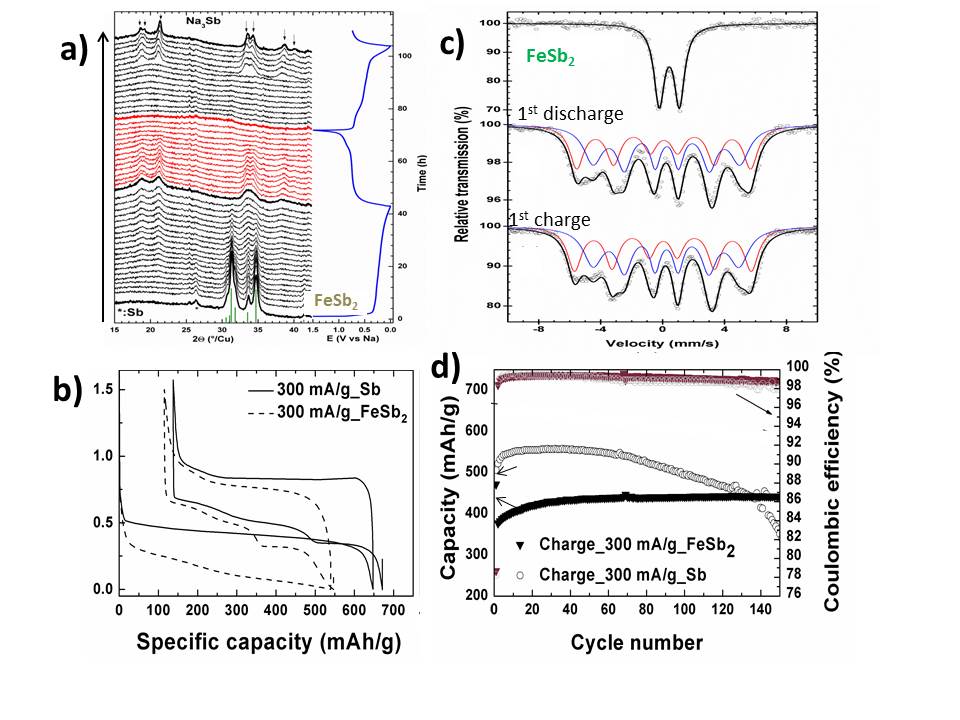