Conference Room 4K (Hilton Chicago)
F. Yuan and K. Isaac (Missouri S&T)
A comprehensive study of a two dimensional MHD (magnetohydrodynamics) micro stirrer with different electrode configurations covering a wide parameter space has been conducted by using computational fluid dynamics simulations. The wall of the circular cavity stirrer acts as the counter electrode. Cylindrical rods ranging in number from one to four, placed inside the cavity act as working electrodes. When two fluids are placed initially in the two halves of the cavity separated by an axial plane, the periodic flow reversal causes stretching, folding and breaking of the interface between the two fluids; an increase in the interfacial area; and enhanced mixing.  Parametric studies conducted by varying the time period of the potential difference and the magnitude of the magnetic field intensity show that both significantly influence mixing quality. By having more complex geometries by increasing the number of working electrodes and choosing their locations inside the cavity, and by implementing specific switching schemes for the potential difference on the electrode pairs, secondary flows could be generated which introduced complex chaotic advection and enhanced mixing compared to the configuration with a single working electrode. This work adds to the relatively small body of work that relies on numerical simulations to study MHD microfluidic mixing problems.  It also establishes numerical simulations as a tool for optimal design of MHD-based lab-on-a-chip applications.

The core microfluidic functions in lab-on-a-chip applications include pumping, mixing, and controlling fluid flow [1]. Among these, efficient and rapid mixing is an especially important task since it has an effect on chemical reaction rates, when multiple species are present. However, due to the small size of these devices (usually millimeters or even micrometers), the Reynolds number is low, and therefore turbulent mixing techniques cannot be implemented. Techniques for speeding up mixing by molecular diffusion, an inherently slow process, are needed to improve the mixing and chemical reaction functionalities of the LOAC devices. By applying time periodic potential differences to the electrode pairs, complex flow features and chaotic advection are introduced. The post-processed results from one simulation follow. The time evolution of species mass fraction with T=4s is shown in Figure 1. Though during the first 2s the flow generates only a few striations, the fluids are well mixed subsequently. This can be attributed to the fact that after the first 2s the fluid moves in the next 2s in a pattern that is not just a reversal of the pattern in the previous two seconds. This mode is repeated four times during the 16s observation time resulting in a more chaotic flow.

The results from a series of simulations show that a certain level of mixing can be accomplished by the simple use of the sinusoidal potential boundary conditions on one pair of electrodes. Once a potential is applied on the electrode pair in the presence of the magnetic field, the flow is driven to move clockwise and counter-clockwise periodically, by the Lorentz force. As a result, the interface between the fluids stretches rapidly, and therefore good mixing can be achieved. Better mixing performance was observed for larger values of the sinusoidal potential wave period. Furthermore, for the cases considered, increasing the total operation time beyond where the mixing quality vs. time plot plateaus, the marginal increase in the mixing quality is small. Mixing performance can be enhanced by increasing the current or the magnetic field strength, thereby increasing the Lorentz force. By introducing two flow structures having opposite sense of rotation with the use of two electrode pairs, one can enhance mixing even better. By applying sine wave potentials with opposite signs on two working electrodes, two counter-rotational flows can be generated and better mixing quality obtained with a shorter mixing time (Scheme A). This idea was then extended to 4 electrode pairs in which two pairs were active at a given time by switching between two schemes identical to Scheme A. This scheme (Scheme B) in which the electrode pairs are made active or inactive during a half period according to the switching schedule, allows more complex chaotic advection that enhances mixing performance even with a smaller magnetic field intensity. In Scheme B, the unmixed regions near the wall found in previous cases are mostly eliminated. 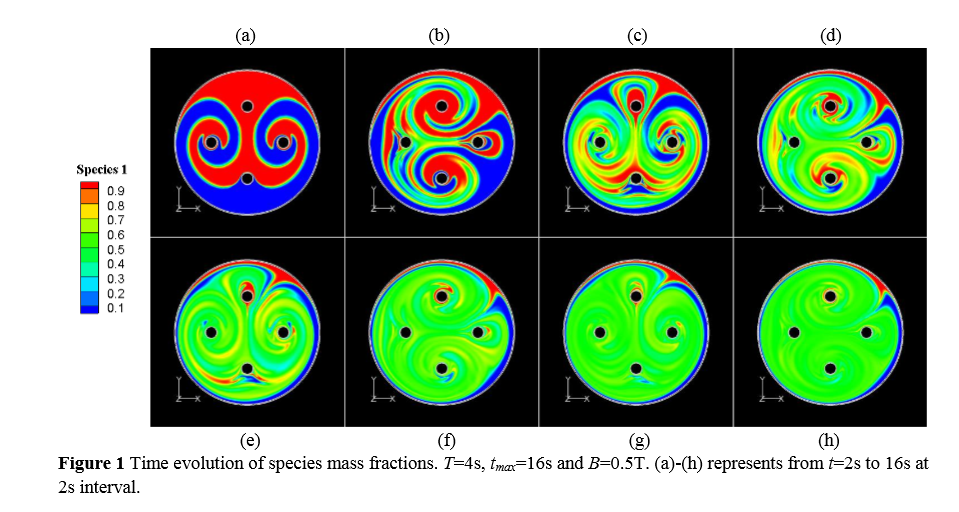