1563
Thin Oxide Film Reduction Via the Polyol Method: An Electrochemical Study of a Polyol Reduction Process

Boulevard Room A (Hilton Chicago)
H. El-Sayed (Technische Universität München), V. Sureshwaran (Universität Ulm), L. Schuster (Technische Universität München), and H. A. Gasteiger (Technical University of Munich)
Polyols are non-aqueous hydrogen bonded liquids, analogous to alcohols, which have the ability to dissolve both organic and inorganic solids. Polyol synthesis [1] has been widely employed for the preparation of metallic nanoparticles using the temperature-dependent reducing ability of polyols in the presence/absence of capping agents, such as polyvinylpyrrolidone (PVP). In a typical polyol synthesis process, ethylene glycol (EG) is used as a solvent to dissolve metal precursors and as a mild reducing agent. By heating the mixture, the reducing power of the EG increases and ultimately reduces the metal precursors, forming metal nanoparticles with narrow-size distribution. In a modified-polyol method [2], an external reducing agent that is stronger than EG is used. This is usually practiced when the metal precursor can’t be reduced by the ethylene glycol alone.

In a polyol or a modified polyol method, the metal precursor can be oxides, hydroxides, nitrates, and acetates that are either dissolved or suspended in the solvent. In case of oxide or hydroxide precursors, they have to be at least slightly soluble in EG at high temperature, otherwise, the addition of an acid is needed.

In the work we are presenting here, we are investigating the possibility of using a (modified-)polyol method to reduce thin oxide films of solid surfaces and surface oxide of bulk oxide materials. We investigated the reduction of Sn oxide thin film [3] on a Sn metal substrate as well as the surface reduction of Sn oxide particles to produce meta-stable SnO2@Sn particles that spontaneously form stable SnO2@SnO particles once in contact with air.

The reduction of the Sn oxide thin film on a Sn metal substrate was indicated by the sudden change in the Sn electrode potential when measured vs. a reference electrode (Ag/AgCl). Fig. 1 shows a typical OCP (open circuit potential) measured during heating and cooling cycles of hydrazine-containing ethylene glycol. The sudden change of the OCP at ~110°C is attributed to the reduction of the Sn oxide film as the interface changes from SnO2/EG to Sn/EG. More details about the origin of this OCP change will be provided in the presentation with the help of information obtained from quartz crystal microbalance (QCM) and/or impedance spectroscopy (EIS).

The surface reduction of bulk Sn oxide in the form of SnO2 particles (50-100 nm) was also investigated. It was found that NaBH4 can reduce the surface oxide resulting in surface SnO. Raman spectroscopy showed that a very small amount of SnO was formed, which is reasonable if it was a surface oxide. Auger and XPS analyses did not show any SnO formation on the surface. The two pieces of information together suggest that SnO has formed on top of the SnO2, but due to the exposure to the atmosphere, the SnO on the top surface oxidized to SnO2 and therefore protected the remaining SnO underneath it and so it was detectable by the Raman and only SnO2 was found on the outermost surface.

Further details and supporting results about the oxide reduction in both cases will be provided in the presentation.

The research leading to these results has received funding from the European Community's Seventh Framework Programme (FP7/2013-2016) for the Fuel Cell and Hydrogen Joint Technology Initiative under grant agreement CATAPULT n°.325268. Special thanks to Sebastian Schwaminger for the assistance with XPS and Raman analyses, Katia Rodewald for the superb SEM pictures and analyses and Marianne Hanzlik for the TEM analysis. 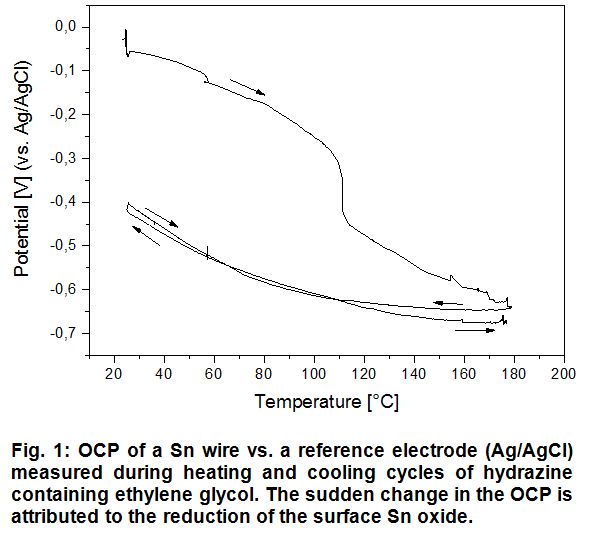