Conference Room 4K (Hilton Chicago)
F. Sepehr and S. J. Paddison (University of Tennessee, Knoxville)
Recently, there has been an increased interest in redox flow batteries (RFBs) in order to transpire the substitution of fossil fuels with renewable energy sources such as solar and wind. Having the power and energy decoupled, these batteries can store electrical energy in the form of chemical energy on a multi-megawatt scale. Particularly, all-vanadium redox flow batteries (VRFBs) are of interest for grid-scale electrical energy storage due to long lifespan, fast response, and no inherent cross-contamination [1]. The VRFB has vanadium cations at four different oxidation states as its electro-active species. The four vanadium cations are solvated in a concentrated sulfuric acid solution as the supporting electrolyte. The V3+/V2+ couple at the negative electrolyte tank and the VO2+/VO2+couple at the positive tank. They are separated by an ion exchange membrane that only allows the permeation of one type of ion (i.e., cation or anion) in order to complete the electrical circuit.

Membranes used in these systems should exhibit low permeability to vanadium cations, high proton or sulfate conductivity, good thermal and chemical stability, good mechanical integrity, and low cost [1, 2]. One of the most widely used cation exchange membranes for VRFBs is perfluorosulfonic acid (PFSA) membrane, Nafion. In the presence of water Nafion exhibits a phase separated morphology with the water and ions confined into domains surrounded by the hydrophobic polymer matrix. The water domains are lined with sulfonate groups which facilitate cation transfer [3-6]. In a VRFB environment protons and vanadium cations can permeate through the water domains. Although, the mobility of the vanadium cations is much lower than that of a proton, over time the crossover of vanadium cations results in capacity loss and electrolyte contamination [7]. In addition, the unexpected diffusion of sulfuric acid into Nafion is reported [8, 9]. Hence, there is ongoing research to decrease solvent and vanadium cation transport across the membrane. And since Nafion is one of the most stable membranes for VRFBs it is important to understand the effect of vanadium and sulfuric acid diffusion on the hydrophobic and hydrophilic domains of the membrane as well as its morphology.

In this work dissipative particle dynamics (DPD) simulations were undertaken to understand the hydrated membrane morphology in the presence of absorbed vanadium cations and sulfuric acid molecules. Distinct DPD beads were constructed based on our previous work on hydrated PEMs and recent studies on the hydration structure of vanadium cations in water and the effect of sulfuric and triflic acids [10-12]. Since the sulfonic acid group is very likely to interact with vanadium cations through their primary hydration shell, the sulfonic acid and hydrated vanadium cations are considered as separate kinds of DPD beads. The structures of the DPD beads were optimized using first principles electronic structure calculations. The interaction parameters were determined by mapping the interaction energies obtained from the ab initiocalculations to the DPD conservative force, while matching the compressibility with that of the actual system. In order to maintain the principle of electroneutrality upon the addition of vanadium cations to the system, the acidity was decreased through the removal of hydrated protons.

The effect of equivalent weight, molecular weight, hydration level, and the ratio of absorbed species to the sulfonate groups on the morphology are examined. The radial distribution functions (RDFs) were generated and used to characterize the simulation results. The root mean square end to end distance for the ionomer was obtained and used to characterize backbone aggregation. The hydrated morphologies were further investigated by obtaining two dimensional contour plots detailing the density distribution of each bead type. 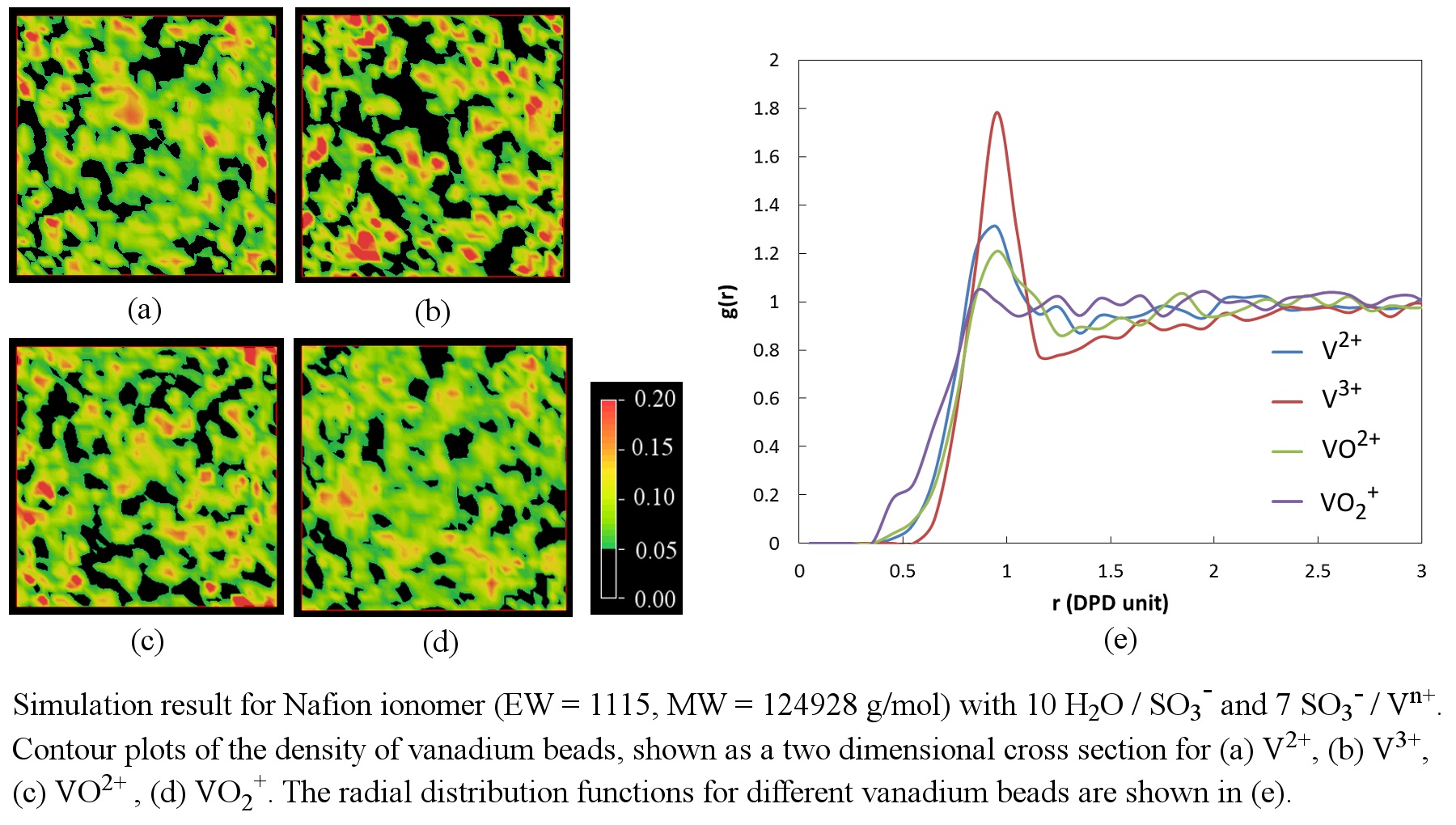