Conference Room 4B (Hilton Chicago)
Y. Liu (Argonne National Laboratory), Y. C. Kimmel (University of Delaware), D. Esposito (National Institute of Standards and Technology), J. Chen (Columbia University), T. Moffat (National Institute of Standards and Technology), and H. You (Argonne National Laboratory)
Water splitting by electrolysis is an effective and renewable way to produce hydrogen fuel from acid or alkaline electrolytes.  Presently, alkaline water electrolyzers are being the most widely employed, largely due to the use of low-cost catalysts.  Yet, there is strong interest for expanded use of acid water electrolyzers in future because of better device performance than the alkaline.  In this work, we explore and develop new fabrication techniques that could minimize the use of the Pt catalyst that is highly active, but too expensive to be used for hydrogen evolution reaction (HER) in acid water electrolyzers.  Of our particular interest is to grow Pt monolayer films and nanostructures on tungsten carbide (WC) supports by electrodeposition.

Fig. 1 shows Pt deposition as a function of applied potential from a NaCl-supporting electrolyte.  An interesting finding is that the deposition of Pt is prevented at potentials below -0.5 V, in spite of high driving forces for Pt clusters to form and grow.  This talk will present ways in which this anomalous deposition behavior can be exploited for preparing novel Pt catalysts. A brief summary will be given for Pt deposition on Au [[1]] and Ni [[2]] electrodes where a monolayer-thick Pt film is deposited at -0.8 V but additional growth is quenched.  For WC substrates, we will discuss challenges associated with the lack of Pt depositing at -0.80 V, before introducing to a new approach that is developed to facilitate the formation of Pt nuclei.

The proposed method involves cycling the potential between -0.8 V and -0.45 V at a fast rate of 50 mV/s.  As shown in Fig. 2, Pt nanoclusters with high particle density could be grown on WC, and their average size is about 5 nm. To gain mechanistic insights on Pt nanostructure nucleation and growth, the deposits were analyzed using scanning electron microscopy (SEM), x-ray photoelectron spectroscopy (XPS), and underpotentially deposited (UPD) hydrogen and copper.  Correlations between deposition potential cycle and particle growth and particle density will be discussed.

Finally, Pt deposits were examined as catalysts for HER in 0.5 M sulfuric acid.  The dependence of HER activity on the number of deposition cycles is shown in Fig. 3 where the HER activity approaches that of bulk platinum as the deposition cycles increase even though the expected total amount of platinum is far less than a complete coverage. This work illustrates that electrodeposition provides a simple and scalable way for preparing Pt nanocluster/WC catalysts, which exhibit high activity and durability toward HER in acid media. 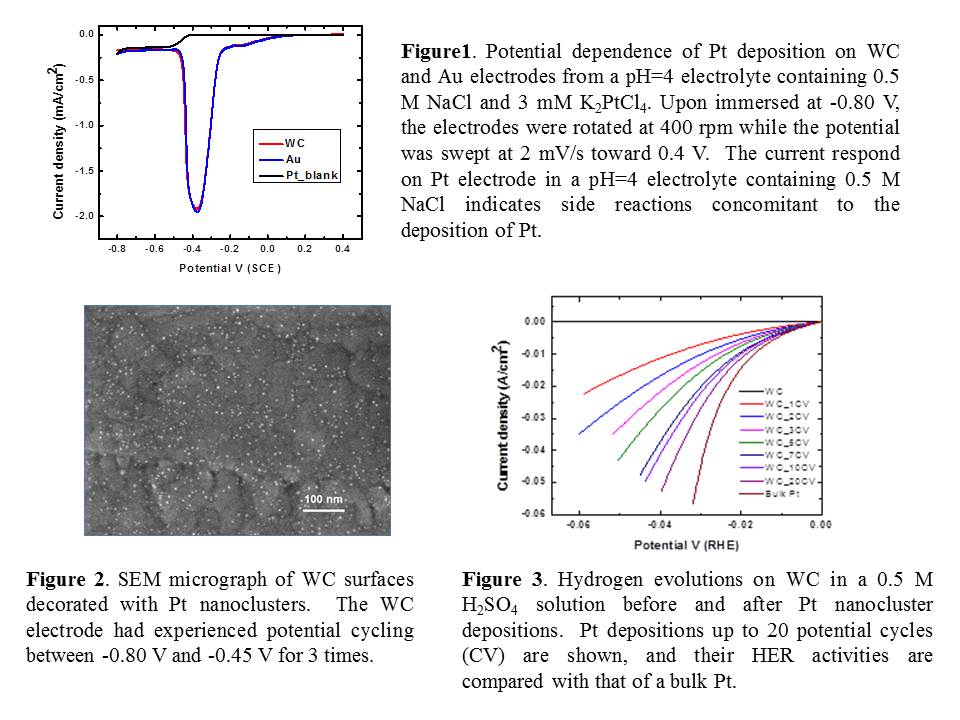