The specific energy (Wh/kg) of a battery can be increased by increasing cell voltage. The 5V-class cathode including the Li-Ni-Mn-(Cr) oxide (LNM) spinel offers higher voltage operation relative to other widely-used Li-ion cathodes. Some inorganic solid electrolytes are known to have a wide potential window and are able to suppress electrolyte decomposition at severe anodic oxidation voltages. Thus, this 5V-class all-solid-state rechargeable lithium batteries is anticipated to be high-energy storage devices with sufficient safety.

However, large interfacial resistance at the electrode/solid electrolyte decreases the power density of the battery. It has been suggested that the large charge transfer resistance is due to the formation of space charge layer at the electrolyte side of the interface in which lithium ion is depleted and ionic conductivity is low[1][2]. To overcome this problem, we examined the interface modification by adding single crystalline nano-sized ferroelectric material, BaTiO3, between the LNM cathode and the solid electrolyte. We found that the charge transfer resistance is effectively reduced by this modification and highly-conductive regions where lithium ions easily migrate might be formed around the BaTiO3particles.

Thin films of LiNi0.45Mn1.485Cr0.05O4 (LNM) were deposited on Ti/Pt coated silica substrates using pulsed laser deposition to a nominal cathode thickness of 30 nm. Single crystalline BaTiO3 nanoparticles (BTNs) with approximately 100 nm in diameter were deposited on LNM cathodes by means of electrospray deposition from a suspension of BTNs in 2-methoxyethanol solvent. The amount of BTNs deposited on LNM was controlled by regulating the volumes of dispersed precursor liquids. The resultant BTNs-dispersed LNM films were observed by FE-SEM. The lithium phosphorous oxynitride (LiPON) electrolyte thin films were deposited by RF magnetron sputtering and Li anode films were thermally evaporated from Li foil. Typical electrolyte and anode film thickness were 2.5 μm and 1 μm, respectively. Electrochemical properties of the resultant thin film batteries were investigated by cyclic voltammetry at a sweep rate of 1 mV/s and impedance spectroscopy over the frequency range of 200 kHz to 10 mHz. Impedance spectroscopy studies were also conducted from 283 - 416 K to measure the activation energy of the charge transfer reaction and investigate the effect of Curie temperature of BaTiO3(ca. 393 K).

FE-SEM images of LNM surfaces with the deposited BTNs were analyzed using image processing program ImageJ to measure BTNs coverage (Cov). Figure 1 (Left) shows the potential sweep curves of the batteries. The battery without BTNs modification did not show any distinct redox peak at 4.7 V, while the partially BTNs modified batteries showed oxidation peaks at 4.7 V and reduction peaks shifted depending on the amount of BTNs. Impedance analysis confirmed that the charge transfer resistances at the LiPON/LNM were effectively reduced by the partial BTNs modification, which improves the redox reactions of the batteries. 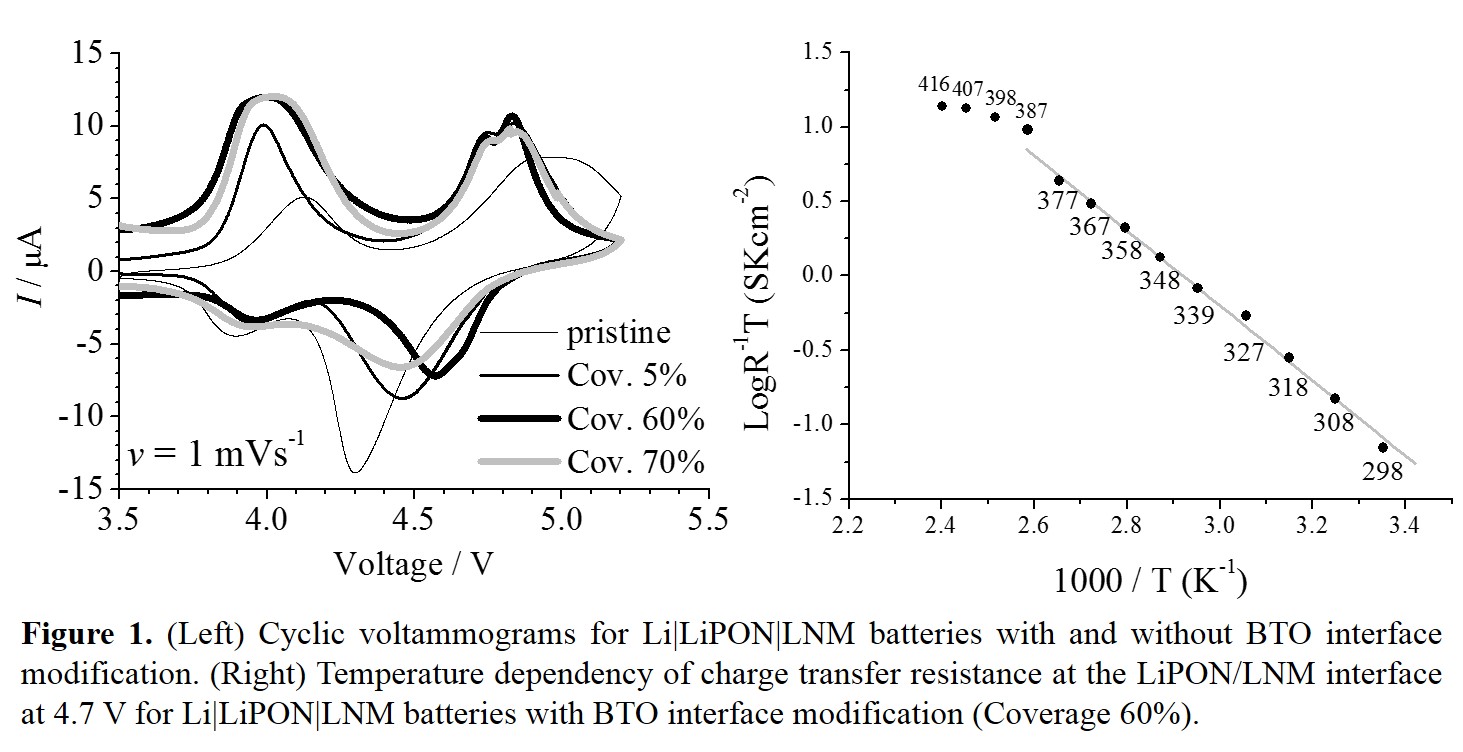