Salon C (Hilton Chicago)
A. Patel and H. Grebel (New Jersey Institute of Technology)
Our goal is to reconstruct batteries and super-capacitors in a fundamental manner.  Thus, we introduced a third electrode, called the gate electrode, between the cathode and the anode of a battery.  In the simulations, we used a simple wet-cell battery with Zn electrode as the anode and Pt electrode as the cathode.  In the experiments we used 5% acetic acid as an electrolyte.  The gate electrode was constructed as a permeable capacitor: two thin Au/Pd films were deposited on each side of a 10-micron Teflon filter.  Thus, the gate electrode was conductive and permeable to the passing ions.  Simulations indicated that by regulating the voltage on the capacitive-like gate electrode, we were able to control the electrolyte potential near it.  Thereby, the flow of ions through this membrane was also regulated. Subsequently, the electronic current in the external circuit, was linearly controlled.

In principle, the gate electrode could be constructed in several ways.  Here, we considered capacitor-like gate electrodes.  One plate of the capacitor was grounded and an external potential bias was applied to the other plate.  Simulations (see figure) indicated that when the bias potential increased, the cell's current substantially decreased.  In the experiments, we grounded the cathode to prevent the biasing potential from floating.  A reference electrode was attached to the un-grounded plate and we ascertained that the potential on the capacitor with respect to the reference electrode depended linearly on the bias.  Experiments validated the simulations: we demonstrated that by applying a voltage bias to the capacitor-like gate electrode, we could linearly controlled the external circuit current, Icell.  This is the first step towards controlling the current produced by a battery and in essence, the first step towards constructing self-powered ion transistors. 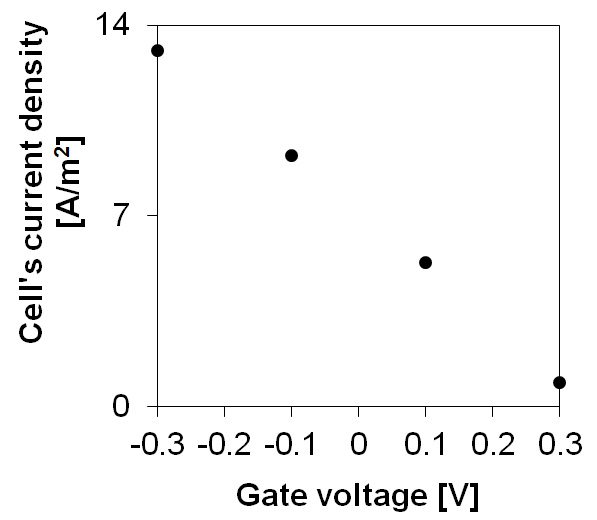