Salon A-4 (Hilton Chicago)
F. Shi (Material Science Division, LBNL, Berkeley, Mechanical Engineering Department, UC Berkeley), H. Zhao (Lawrence Berkeley National Laboratory), K. Komvopoulos (Mechanical Engineering Department, UC Berkeley), G. Somorjai (Material Science Division, LBNL, Berkeley, Chemistry Department, UC Berkeley), and P. N. Ross (Lawrence Berkeley National Laboratory)
The design of safe, high-energy batteries exhibiting prolonged lifetime greatly depends on understanding the surface reactions occurring on the electrode surfaces and the role of the solid electrolyte interphase (SEI) film. Most of the naturally forming SEI films demonstrate undesirable characteristics, such as instability and continuous surface reaction that decrease the capacity of Si-based Li-ion batteries (LIBs). An effective and economic way to modify the surface chemistry in LIBs rather than the Si architecture is by electrolyte additives. The objective of the present study is the examination of the concentration dependence of vinylene carbonate (VC) and fluoroethylene carbonate (FEC) additives on the long-term electrochemical performance of LIBs, as well as the dependence of the SEI formation mechanism on the concentration of the VC and FEC additives.

A significant improvement in the cycling performance of Si electrodes can be achieved under operation conditions of optimum VC and FEC concentration. To better understand the additive concentration effect, the reduction mechanisms of VC and FEC were investigated for both Si nanoparticle and Si(100) single crystal working electrodes. Ex-situ ATR-FTIR spectra of Si electrodes for 5% VC additive show a broad peak at a higher wavenumber (1831 cm–1) compared to the EC residual electrolyte (1799 and 1769 cm–1) (Fig. 1). Based on synthesized poly-VC standard spectra, the VC additive reduction compound is assigned to poly-VC or its oligomer, which is consistent with previous reports. However, for Si electrode and FEC additive, the original C=O stretch (1829 and 1802 cm–1) disappears or shifts to a lower wavenumber. The exact reduction product of FEC degradation has not been confirmed yet due to the lack of significant features other than the residual electrolyte. However, it is clear that FEC follows a different reduction path than VC. The reduction path of VC is polymerization with the reduction product remaining a “ring” structure (the C=O peak shifts to a higher wavenumber), whereas the reduction path of FEC is similar to that of ethylene carbonate (EC), leading to a reduction product of open “ring” structure, similar to that produced from EC reduction. More experiments are underway to confirm the different reduction paths of VC and FEC stated above.

This work was supported by the Assistant Secretary for Energy Efficiency and Renewable Energy, Office of Freedom CAR and Vehicle Technologies of the U.S. Department of Energy under contract No. DE-AC02-OSCH11231. 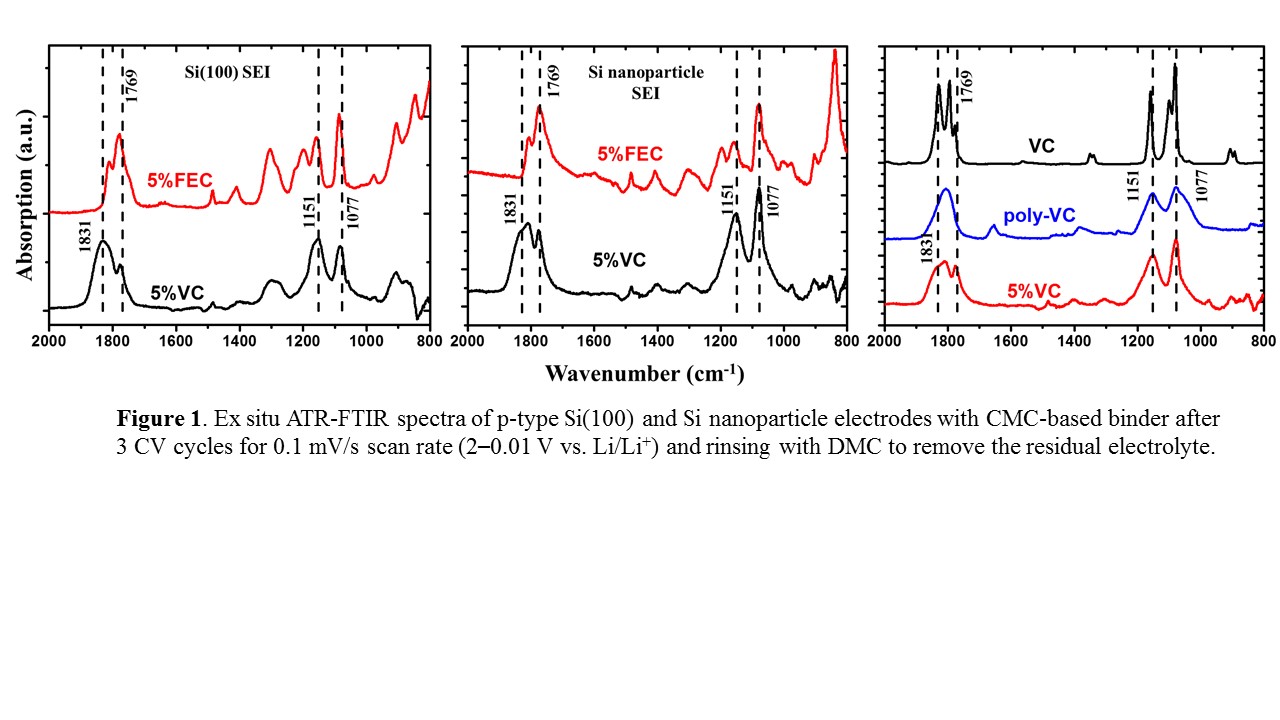