Conference Room 4F (Hilton Chicago)
M. Barr (Aix-Marseille Université - CNRS), L. Assaud (Friedrich-Alexander Universität Erlangen-Nürnberg), Y. Wu, J. Bachmann (Friedrich-Alexander Universität Erlangen-Nurnberg), and L. Santinacci (Aix-Marseille Université - CNRS)
A system for the photoelectrochemical splitting of water into H2 and O2 must consist of components for light absorption, for the separate transport of electrons and holes, and for the separate catalytic turnover of the reduction and oxidation reactions. The integration of all functions into a monolithic device requires as a central element a multi-junction solar cell of exceptional character able to deliver at least 1.5 V [1]. Instead of this, we envision that both half-reactions (oxidation and reduction) could be performed at two separate photoelectrodes connected in series and each of which combines an intrinsic, light-absorbing layer with an appropriate transparent semiconductor. For applications, both materials should contain no rare or particularly toxic element. The transparent semiconductor provides a directionality for the separation of charge carriers by functioning as a hole barrier (if n-type) or electron barrier (if p-type). Its presence also enables the experimentalist to separate the functions of light absorption and charge transport, and optimize each of them separately. The thickness of each layer can indeed be set independently. We contend that this approach has a better promise than attempts to use a single semiconductor to absorb light and simultaneously carry current, a case where any change in the geometry affects both aspects. It relies on the capability to generate elongated nanostructures the “vertical” length of which defines the light absorption path length, whereas the charge carrier separation occurs on the “lateral” width. Nanostructured electrodes can indeed show a better charge carriers collection, a better light scattering, a quantum confinement inducing a better charge transfer, an appropriate band edge position, a surface area-enhanced charge transfer and a multiple exciton generation. It has been recently reported that Sb2S3 can be used as extremely thin absorber (ETA) in solar cell [2]. As shown in Figure 1, this ETA should therefore be combined with both p- and n-type materials such as NiO and TiO2, respectively. The present work is then focused on the fabrication of such nanostructured photocathode and its characterization. In order to create three-dimensional nanostructures, p-NiO and i-Sb2S3 thin films have been successively grown into anodic alumina oxide (AAO) membranes by atomic layer deposition (ALD). AAO offers the possibility to tailor the pore diameter and length while ALD allows an accurate control of the layer thickness even on such highly porous materials and produces high quality deposits.

The appropriate temperature windows of the ALD reactions has been determined, as well as the films growth rates in optimized conditions. In some cases, the films have been subsequently be annealed in inert and reactive atmospheres so as to modify their crystalline structure and stoichiometry. These various samples have been characterized using numerous methods. The film thickness has been gained from spectroscopic ellipsometry.  The chemical compositions have been identified by x-ray dispersive and x-ray photoelectron spectroscopies (EDS, XPS) and the morphology of the thin films has been observed by scanning and transmission electron microscopies (SEM, TEM). The crystal structure and quality have been determined by x-ray diffraction (XRD) and  high-resolution TEM. Since morphology and crystalline structure of Sb2S3 is strongly dependent on the substrate, its deposition and annealing processes have been emphasized.

Since the photocathode composition, structure and geometry is well controlled, the optical and photoelectrochemical properties have been investigated and optimized using cyclic voltammetry in the dark and under illumination as well as UV-visible absorption spectroscopy. It has been sought to uncover trends in the photoelectrochemical activity of the system (photocurrent density and photovoltage) and rationalize them in terms of optical and electrical functions.

Due to the discontinuous nature of the ETA film, the electrochemical activity of the NiO underlayer could be detected. It has been found that such multilayered system exhibit a higher optical absorption when the Sb2S3 was deposited and it is further improved when it has been annealed. It demonstrates therefore the validity of the concept. 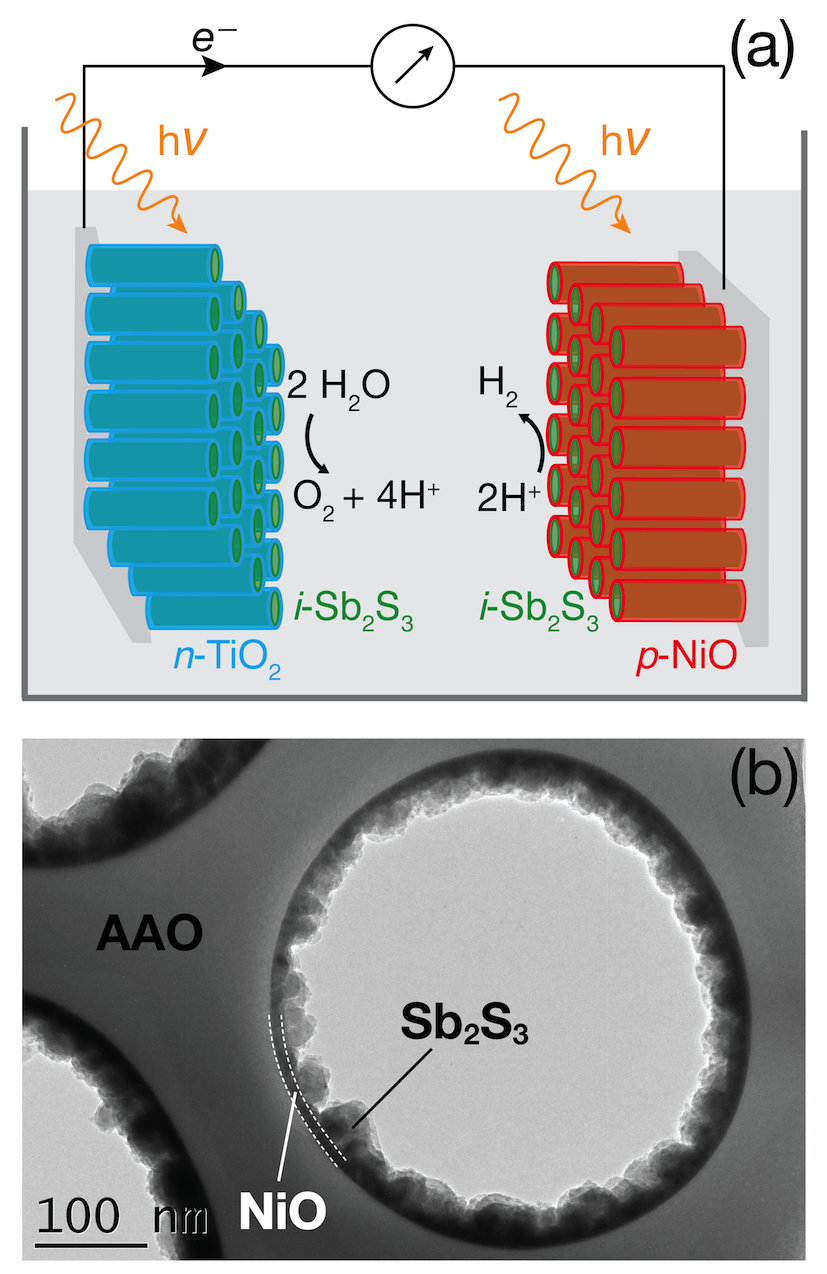