Increasing worldwide pollution has become one of the key environmental problems. Extensive use of organophosphate pesticides (OPs) has raised serious public concern. Traditional analysis of OPs is routinely carried out by gas/liquid chromatography or mass spectroscopy. These methods are often expensive and not suitable for in-situ measurements. Alternatively, enzyme/antibody-based biosensors have emerged recently. Although high selectivity can be achieved, the poor chemical/physical stability of the antibodies or enzymes prevents the use in harsh environments. Compared to these technologies, electrochemical methods have been highly concerned for the detection of OPs due to the inherent sensitivity, simplicity, favorable portability, and low cost. Currently, how to construct a high-performance, in particular a non-enzymatic and label-free electrochemical sensing platform, for the detection of OPs remains a significant challenge. Herein, we developed a highly sensitive impedance sensor for the detection of acephatement (AM) as the model of OPs by the combination of layer-by-layer (LBL) nanoassembly and supramolecules. The nanoassembly was obtained by alternate assembly of cationic poly (diallyldimethylammonium chlo-ride) (PDDA), anionic graphene oxide (GO) and cyclodextrin (CD), respectively, onto the surface of carbon nanospheres (labeled as PDDA-GO-CD@CNs).

The CNSs were prepared by a “green” method under hydrothermal conditions according to the previous report. The assembly of PDDA-GO-CD@CNs was performed by alternative LBL assembly, and then collected by centrifugation at 3000 rpm and dried at 60 0C overnight. Afterwards, 10 µL of 0.1 mgmL-1 dispersion of PDDA-GO-CD@CNs composite was dropped onto the surface of the cleaned GCE and was kept at room temperature till dry (labeled as PDDA-GO-CD@CNs/GCE). Impedance measurements were obtained at the open circuit potential with a frequency range of 0.1-100,000 Hz and amplitude of 10 mV at a CHI 660D electrochemical workstation (Shanghai Chenhua, China). A conventional three electrode system was used comprising platinum foil as auxiliary electrode, a standard Ag/AgCl as the reference electrode, and the modified GCE as the working electrode. The electrolyte solutions were slowly stirred for a certain time after each injection of AM before impedance measurements.

Fig. 2a shows the impedance change with different concentrations of AM. With increasing the concentration of AM, the binding sites will be successively filled with AM molecules via the host-guest interaction. The values of Rct (charge transfer resistance) as a function of AM concentration are plotted in Fig. 2b. Two linear relationships were observed ranging from 0.001 to 0.020 μg mL-1 and 0.1 to 0.5 μg mL-1, with a detection limit 0.6ngmL-1 (S/N=3).

In summary, we have successfully fabricated an ordered inorganic-organic nanostructured assembly of PDDA-GO-CD@CNs film via a facile LBL assembly and first explored its application as a label-free impendance sensor for the detection of OPs. Such a nanoassembly of PDDA-GO-CD@CNs, combining the individual properties of building blocks, exhibits a strong enrichment effects toward AM, and finally realizes the rapid, highly sensitive and selective determination of AM. The resulting sensor shows both good reproducibility and ideal stability. We believe that the combination of nanoassembly architectures and supramolecules as well as capacitive transduction would pave a new way for enzymeless and label-free sensing OPs. 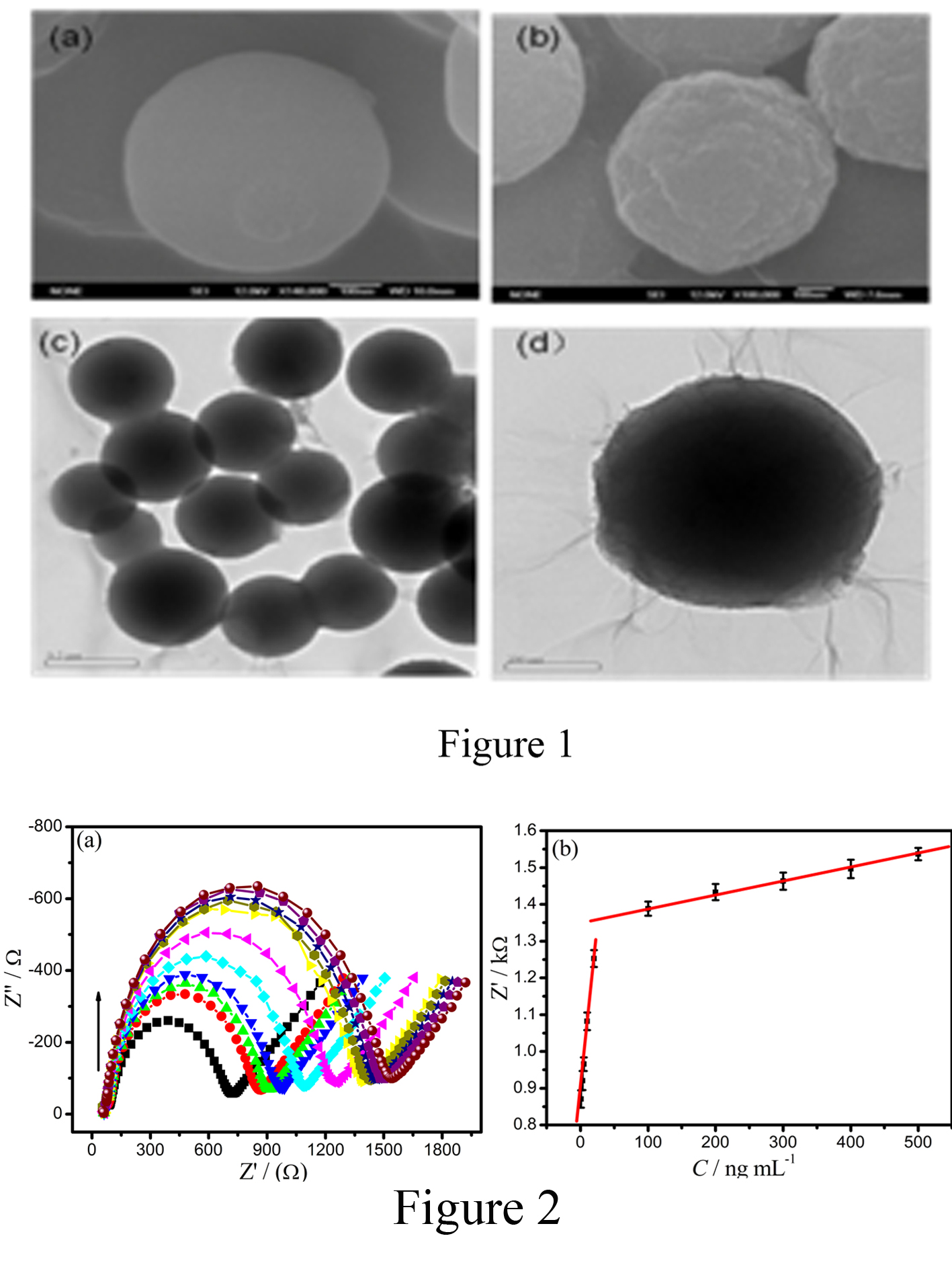