Continental Room A (Hilton Chicago)
K. Nagase (University of Yamanashi, TAKAHATA PRECISION JAPAN), J. Inukai (University of Yamanashi), H. Motegi, M. Yoneda (Mizuho Information & Research Institute, Inc.), Y. Nagumo (Shimadzu Corporation), T. Suga, H. Nishide (Waseda University), M. Uchida (University of Yamanashi), and M. Watanabe (Fuel Cell Nanomaterials Center, University of Yamanashi)
For the efficient design of PEFCs, as well as MEAs, it is important to understand the reactions inside the cell in real time and space during the power generation. Visualization of the oxygen partial pressure (p(O2))1-4) was carried out both at the surface of a GDL and the upper part of gas-flow channels of the cathode of an operating PEFC with straight flow channels using an oxygen-sensitive luminescent dye film. A numerical simulation was also carried out to help understand the reaction distributions inside the PEFC.1) The distributions of oxygen partial pressure, current density, water concentration, and temperature in the operating PEFC were thus obtained, and the relationships between those were studied. At a high humidity, liquid-water blockages formed at the end of the channels were visualized.2) The water plugging changed the distribution of the power generation on the MEA, which was clearly shown by the simultaneous visualization of p(O2).2,4)

Fig. 1(a) shows a schematic representation of the gas-flow channels, and Fig. 1(b) the five gas-flow channels and the MEA.2) The channel depth and width of the cell were 0.6 and 1 mm, respectively. A cathode endplate was made of transparent quartz. A dye film was coated on the GDL surface at the cathode to visualize p(O2) on the GDL. In a separate experiment, the same dye film was coated on the upper-channel wall of the PEFC for detecting p(O2) on the upper-channel wall. Diffused laser light (407 nm) was frontally irradiated onto the transparent cell window. The emission from the cell was filtered (>610 nm) and captured with a CCD camera, which was subsequently converted to the distribution of p(O2). Water droplets were simultaneously observed with p(O2) using this system. The numerical calculation was carried out for the phenomena inside the MEA as reported previously.1,6)

Fig. 2(a) shows the p(O2) distribution on the GDL at 80 ºC, 80% RH, 0.6 A cm-2 with the oxygen utilization (UO2) of 45%. The air flow rate was 0.111 mL min-1. In the three central channels (Channels 2, 3, and 4), p(O2) decreased in a similar manner. In Channels 1 and 5, p(O2) was higher than that in the other channels at the same channel length. p(O2) values at the GDL in Channel 3 at different UO2 (by changing the air flow rate) are plotted along the dashed lines (Fig. 2(a)) near the inlet (b), at the center (c), and near the outlet (d). A change in p(O2) was observed not only along the channel length, but also across the channel width. With using the p(O2) data, numerical calculation at different UO2 was carried out for current density, water activity, and temperature throughout the MEA (Fig. 3). Interestingly, water was found undersaturated at high UO2, which explained the p(O2) visualization data under the same conditions.

When the relative humidity was increased, plugging of the flow channels appeared.2) The cell voltage showed a large instability, and the voltage dropped and recovered periodically every five seconds. Fig. 4 shows the visualization images during the voltage drop observed at 80 ºC, 90% RH, 0.6 A cm-2, and UO2 = 35%. Each image was recorded in 1.5 s. With water blockages at the ends of the gas flow channels, the plugged channels are seen blue except near the inlet. This means that p(O2) on the GDL decreased nearly to 0 kPa in the plugged channels. Not only one but two channels are seen blocked. The blockage disappeared and appeared very quickly in one second. This behavior was very different from that in a cell with serpentine channels4).

The combination of the visualization and the numerical simulation provides a useful tool for the reaction analysis inside PEFCs.1) This visualization technique was found also helpful when liquid water exists inside cells.2-5)

This research was performed under funds for the HiPer-FC project supported by NEDO, Japan and the “Development of Systems and Technology for Advanced Measurement and Analysis” program by JST, Japan 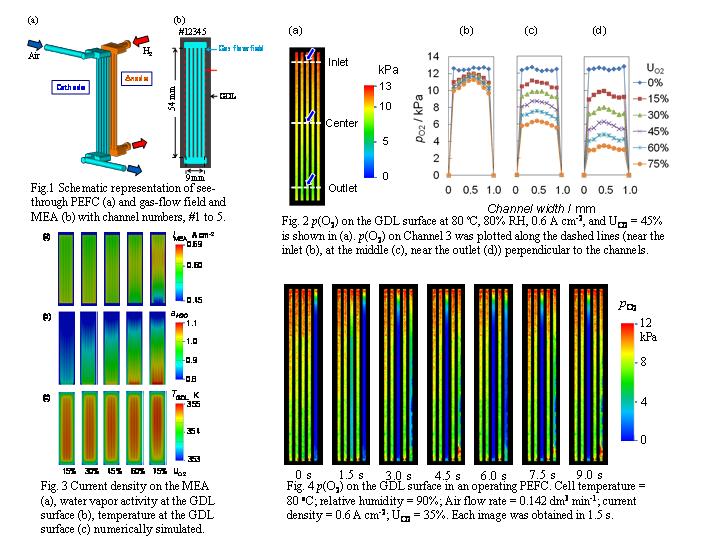