Magnesium secondary batteries, first proposed in the late 1990s,2,3 demonstrate intrinsic fundamental advantages over other competing technologies i.e., Li secondary batteries, and are therefore promising candidates for energy conversion and storage. Early Mg secondary batteries comprised of a metallic magnesium anode, a composite cathode and a polymer electrolyte based on polyethylene glycol incorporating an innovative δ-MgCl2 salt.4,5 Subsequent electrolytes based on Grignard and other organo-Mg compounds have also been explored,6 and were shown to exhibit good Mg deposition/stripping. Nevertheless, these electrolytes suffer from several drawbacks associated with their chemical stability in ethereal-based solvents, which are characterized by high vapour pressure and flammability. In order to overcome these drawbacks, the use of ionic liquids (ILs) as a solvent for stable Mg-ion source precursors is appealing in order to obtain electrolytes with a high chemical inertia, a wide electrochemical stability window, a low volatility and negligible flammability.7

Here we present a new room temperature ionic liquid synthesized by reacting 1-ethyl-3 methylimidazolium iodide with aluminium iodide. δ-MgI28 is used as the magnesium source to obtain a family of Mg2+ conducting electrolytes with the general formula [EMImI/(AlI3)m]/(δ-MgI2)n. δ-MgI2 which is a highly disordered form of MgI2 and synthesized by reacting metallic Mg with n-iodobutane. Similar to the previously described δ-MgCl2,9 δ-MgI2 forms concatenated polymer chain complexes with aluminium through iodine bridging atoms.

The chemical composition of the samples was determined by ICP-AES and microanalysis. Their thermal stability and transitions were studied by differential scanning calorimetry (DSC). The applicability of the [EMImI/(AlI3)m]/(δ-MgI2)n electrolytes in prototype cells was evaluated by studying the conductivity of the materials as well as the electrochemical performance in terms of Mg deposition/stripping, coulombic efficiency, and exchange current density. Results of the deposition/stripping performance for a selected concentration are shown in Figure 1. 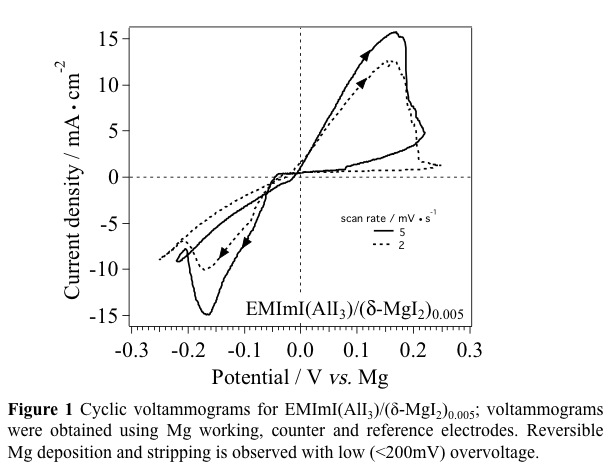