The V(IV) and V(V) ions are known to be complexated by sulphate anions in acidic media [2], V(V) seems to be stabilized in concentrated sulphuric acid [3]. In this work the non-complexing perchlorate anion has been used to avoid the competition for vanadium ion coordination. Several catholytes including 0.5M of V(IV)/V(V) have been prepared in 1M sulphuric acid from vanadyl sulphate salt and in 1M perchloric acid by ion exchange reaction and electrooxidation at graphite felt electrode. The V(IV)/V(V) electrode reactions have been investigated by cyclic voltammetry at pre-oxidized glassy carbon electrode (Figure 1). The V(IV) oxidation and V(V) reduction are found to proceed more reversibly in sulphate-containing electrolyte. The oxidative conversion of V(IV) have been characterized in-situ in visible and near-infrared range during spectoelectrochemical measurement in three-electrode cell at reticulated glassy carbon electrode.

Both of the studied systems have been compared as electrolytes in the 40 cm2 cells using carbon felt electrodes and Nafion separator membrane. The charge-discharge tests performed at current densities from 25 to 50 mA/cm2 revealed that both systems have comparable power densities during charge, however the sulphate-containing electrolyte has higher power density during discharge.

The test of thermal stability revealed the higher stability of the 0.5 M V(V) in sulphuric acid compared to equimolar V(V) solution in perchloric acid.

The results can be useful for careful adjustment of vanadium ion coordination in electrolyte for improved V-RFB. Being impractical as a neat electrolyte solution the vanadium-perchlorate system can be used to study the effect of other, i.e. strongly complexing ligands and can serve as a reference system. 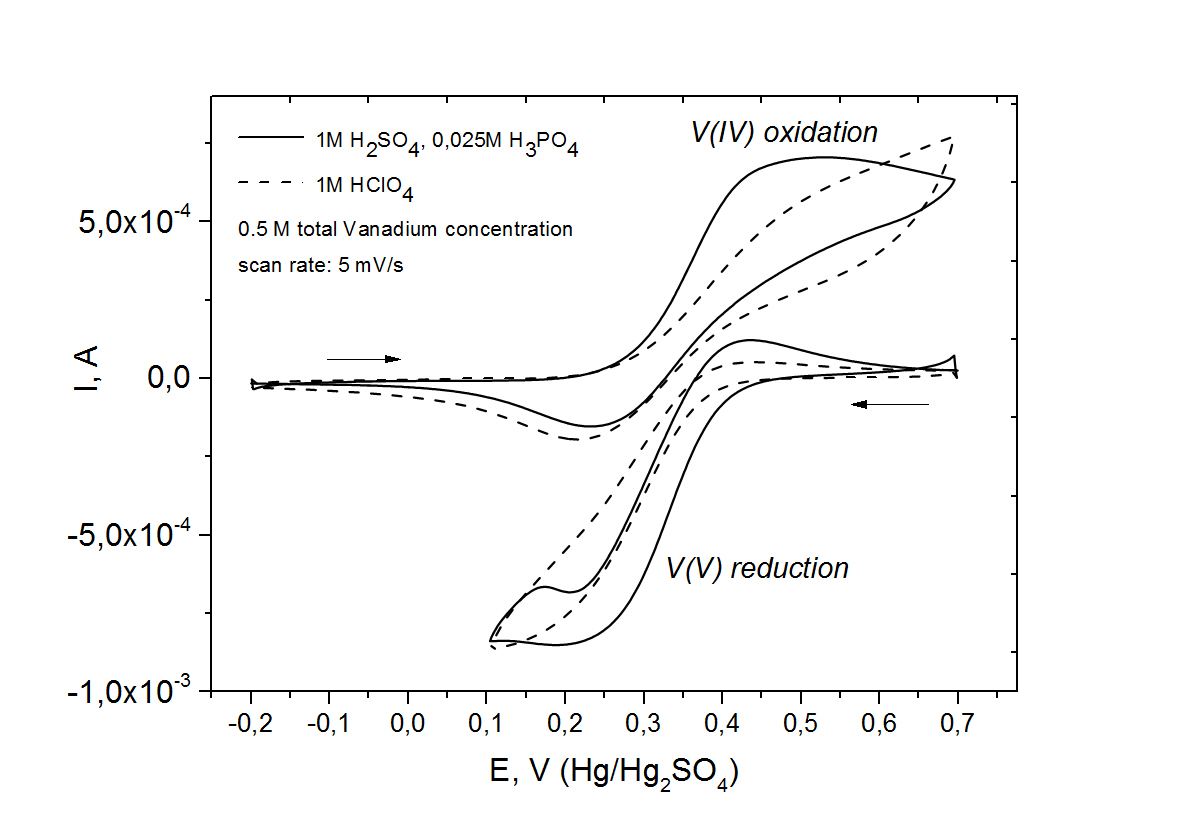