Considering the above aspects, the commercial lithium manganese oxide spinel, LiMn2O4 (LMO) cathode can become preferable candidate particularly with regard to costs, environmental and efficiency perspectives. However, the LMO also suffer from the rapid capacity fading with cycling due to the manganese dissolution at an elevated temperature which limits the practical use of this material for large-scale applications. Numerous efforts have been proposed to overcome this issue. Recently, researchers demonstrated the excellent performance of octahedral LMO and attributed it to their surface facets, especially {111} which allow for thinner SEI formation than {110} facets [3, 4].

LMO chemistry can be improved by doping with very small amount of the nickel, e.g., LiNi0.2Mn1.8O4 [5]. As part our continuing investigations on the impact of microwave chemistry on the electrochemical performance of battery materials [6], we report the preparation of nickel-doped LMO (i.e., LiNi0.2Mn1.8O4) with microwave irradiation as an essential step to achieve enhanced electrochemistry. As-prepared active Mn3O4 with well-shaped octahedral {011} facets morphology was doped with lithium and very low amount of Ni to give LiNi0.2Mn1.8O4 spinel with exposed {111} facets (Fig.1a) that allowed for structural and cycle stability. In addition, the 6,7Li MAS NMR shows the two isotropic Li resonance of nearly 528.4 - 604.7 ppm and 528-596.3 ppm for LMNO and LMNO-mic results the multiple Li environments by the distribution of Mn and Ni atoms.  Interestingly, the microwave irradiated spinel delivered a better cycle stability, rate capability, low impedance, and improved lithium diffusivity at different temperatures compared to the untreated one.

In this presentation, we will discuss in detail our findings on the impact of microwave irradiation on the electrochemical performance of the LiNi0.2Mn1.8O4 spinel at ambient and high temperature (60oC). 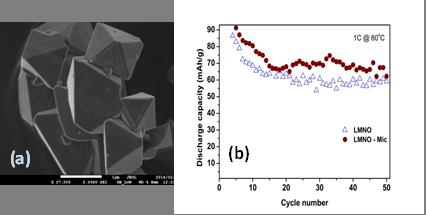