G4 (Kishida Chemical, Japan) and LiFSI (Central Glass, Japan) were mixed in different molar ratios in an Ar-filled glovebox. Prior to usage, G4 was dehydrated by activated 3Å molecular sieves until the residual moisture was controlled below 10 ppm. As-received LiFSI was dried at 40 oC for 24 h in a vacuum oven. The mixtures of LiFSI-xG4 were stirred for 24 h at room temperature and the as-prepared homogenous electrolytes were stored and handled in the glovebox, where x is the molar ratio of G4 to LiFSI. The final residual moisture in all mixtures was below 20 ppm. Surface morphology of the deposited Li cathode was investigated by a scanning electron microscope (SEM, Hitachi S-4800). Specimens were mounted onto the homemade SEM holders in a glove box and transferred into the SEM instrument to avoid the contamination from water in air. The CR2032 coin-type cell of Li/LIFSI-xG4/Li with a glass fiber separator (Whatman GF/B) was employed to examine the Li electrode performance in LiFSI-xG4. All the cell parts were dried in a vacuum oven at 80 oC for 24 h prior to usage.

Raman measurements revealed that the solvent of G4 was completely bound to lithium cations to form a solvate ionic liquid (SIL) for x=1 and 2 in the as-prepared mixtures of LiFSI-xG4. X-ray Photoelectron Spectroscopy measurements of lithium electrode surface indicated G4 should participate in and control the generation of the surface film onto lithium metal.

The morphology of lithium electrodeposits in LiFSI-2G4 was revealed to be flat homogenous adjoining proto-islands as shown in Fig. 1, which may promote a two-dimensional layer-by-layer lithium deposition mode. The solvated lithium ions of (2G4)Li+ in the bulk electrolyte deposit onto these proto-islands by interaction of G4 as a surfactant, resulting in enhancement of the nucleation density and reduce the magnitude of the islands edge barrier [4]. The high adatoms diffusivity could also be realized at 60 oC by virtue of elevated temperature and moderate viscosity. As long as the size of growing island is greater than the separation between two-dimensional nuclei, the layer-by-layer growth prevails in the subsequent deposition [5]. A symmetrical Li/LiFSI-2G4/Li cell showed no short-circuit for 41.2 h till the capacity of used lithium anode at 1 mA·cm-2 and 60 oC. Lithium anode can deliver a high specific areal capacity of 12 mAh·cm-2 for 40 cycles at 6 mA·cm-2 and 60 oC in LiFSI-2G4. Further, we demonstrated that LiFSI-2G4 as the anolyte allows the practical cycleability of high energy density aqueous lithium-O2 cell and confirmed that LiFSI-2G4 is a highly promising electrolyte for lithium electrode. Details of these results will be presented in this meeting.

This study was supported by the Japan Science and Technology Agency (JST) under the “Advanced Low Carbon Technology Research and Development Program”. We thank Central Glass for the generous supply of LiFSI. 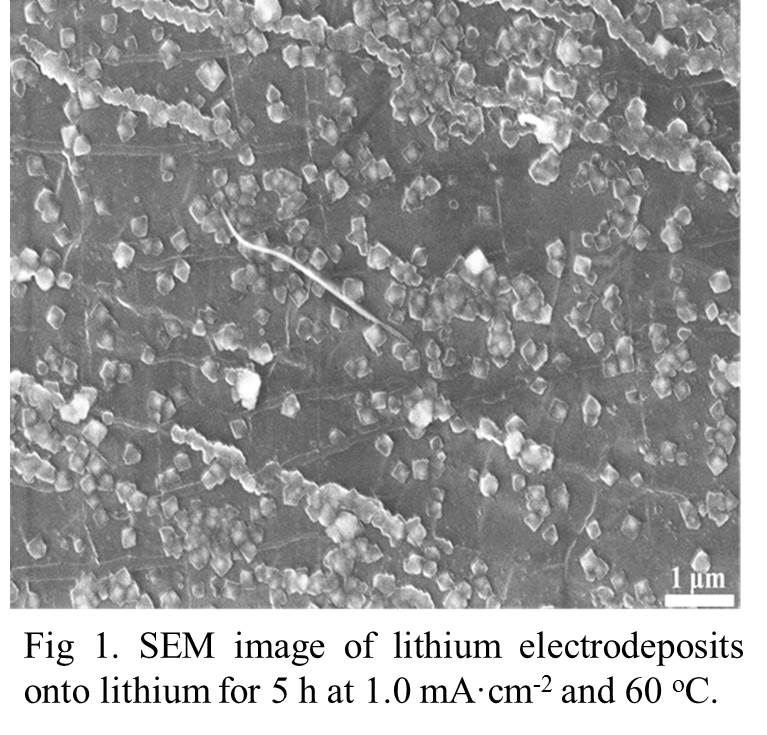