The LMR-NMC electrode impedance is much higher than the impedance of the NCA and NMC electrodes. The higher impedance of the LMR-NMC electrode suggests that it would be better utilized in a high energy battery rather than a high power battery. The intercalation active material electrochemical model and supporting studies indicate the source of the higher impedance can be associated with a much higher electronic contact resistance between the oxide active material and the conducting carbon additive, as well as the material’s interfacial and bulk transport and kinetic characteristics being significantly worse than the other oxides, as typified by the active material lithium diffusion coefficients for the surface layer and bulk material (DSi and DSb) and the kinetic exchange current density (io).

As typical of layered oxide active materials the LMR-NMC electrode impedance increases at low and high SOCs, corresponding to DSi, DSb, and io all decreasing. Further, the rate of decrease in the parameters with SOC (i.e increase in impedance) is higher than observed for the other layered oxides. When the LMR-NMC electrode is allowed to relax for a very long time (i.e. approximately 100 hours) the impedance is observed to be significantly higher. Also, the resulting DSi, DSb, and io parameters determined by the intercalation electrochemical model from the EIS studies during charge and discharge where found to correlate with electrode voltage. This unique behavior for the LMR-NMC electrode is explained by the LMR-NMC bulk reaction and transport electrochemical model, which accounts for the individual domains in the active material. Specifically, the Li2MnO3 domains when allowed to relax are either nearly full or empty depending on the SOC. Because of the large characteristic time constant for the Li2MnO3 domains’ transition, when the LMR-NMC material is used in transportation applications the Li2MnO3 domains typically never relax and the electrode exhibits a lower impedance.

The LMR-NMC bulk reaction and transport electrochemical model describes much of the observed behavior that cannot be accounted for using a standard intercalation active material electrochemical model. This includes the voltage hysteresis as shown in Figure 1, as well as the slow relaxation phenomena. However, the complexity of this model makes determining the parameters for the individual domains quite a challenge.

Support from the Vehicle Technologies Program, Hybrid and Electric Systems, David Howell (Team Lead) and Peter Faguy, at the U.S. Department of Energy, Office of Energy Efficiency and Renewable Energy, is gratefully acknowledged. The submitted manuscript has been created by UChicago Argonne, LLC, Operator of Argonne National Laboratory (“Argonne”). Argonne, a U.S. Department of Energy Office of Science laboratory, is operated under Contract No. DE-AC02-06CH11357. The U.S. Government retains for itself, and others acting on its behalf, a paid-up nonexclusive, irrevocable worldwide license in said article to reproduce, prepare derivative works, distribute copies to the public, and perform publicly and display publicly, by or on behalf of the Government. 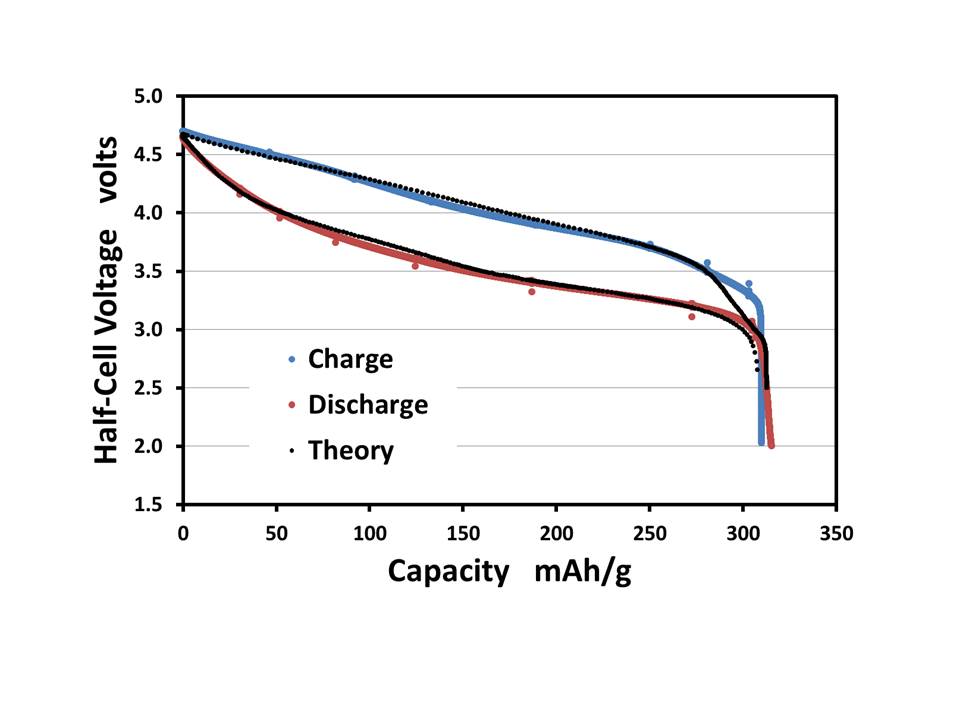