Continental Room B (Hilton Chicago)
K. P. Diaz Orellana, S. Leguizamon, and M. E. Roberts (Clemson University)
Recently, there has been an increase in the need for high energy and high power devices to supply the demand in areas as renewable energy generation systems, electric transportation and power leveling systems; traditional capacitors and batteries are not able to meet the current needs. However, new technologies face many challenges, such as material availability, charge efficiency, capacity, cycle stability and scalable manufacturing.

Supercapacitors have emerged as promising devices to bridge the gap between conventional high-power capacitors and traditional batteries. Various materials can be use as supercapacitor electrodes, ranging from highly porous, inert carbon micro/nanomaterials to Faradaic metal oxides and conducting polymers. Carbon materials rely upon electrical double layer capacitance (EDLC), which store charge by the physical separation of charges within the interface electrode-electrolyte, leading to fast discharge rates (high power) while limited by low energy densities. On the other hand, Faradaic materials, such as metal oxides and electroactive conducting polymers (EPCs), are more attractive since they store charge base on electron transfer mechanisms, which leads to higher energy densities.

Recent studies [1] have shown that redox polymers can be added to ECPs during polymerization to increase the electrodes’s Faradaic redox capacitance. Lignin represents an abundant biorenewbable polymer, which possesses little value aside from its heat content. The complex structure of lignin contains aromatic and aliphatic carbon subunits along with various forms of oxygen with phenolic groups that can undergo redox processes. While the sulfonated form of lignin (sodium lignosulfonate) has been used to enhance the redox capacitance in polymer electrodes, it makes up a small percentage of the available lignin. The widely available form of lignin (alkali lignin, AL) has limited solubility in aqueous acidic solutions thereby limiting the scope and cost advantages of lignin-polymer supercapacitors.

In this work, we enable the use of alkali lignin to increase the capacitance of composite electrodes by utilizing acetic acid (AA) as synthesis media. We describe how redox polymer properties and process conditions can be utilized to increase the performance of composite electrodes comprising ECPs and redox materials, for the development of high power and energy density hybrid capacitors, through electrochemical and chemical synthesis methods.

Figure 1a shows the solubility (g/mL) of AL in AA solutions along with the peak current from cyclic voltammetry measurements for polymerization solutions with varying AA molarity. For all other conditions equal, we found that electrodes synthesized in 15.3 M AA exhibited the highest redox activity. Furthermore, when varying the pyrrole to lignin ratio we found that the peak current increases with the increases in AL concentration as more lignin is integrated within the polymer network (figure 1b) providing additional redox activity from the phenolic groups present in lignin. Although ratios above 1:2 pyrrole to lignin resulted in a decrease in the electrochemical activity, since the insulated nature of lignin inhibits the electrochemistry in the polymer network.

Electrodes of PPy/AL in AA were prepared and compared to the electrochemical properties of PPy/SLS synthesized in either AA or H2SO4. The cyclic voltammetry profiles are presented as of specific capacitance (F/g) vs voltage (figure 2a). PPy/SLS electrodes synthesized in AA and H2SO4 exhibited similar redox activity, indicating similar film chemistry. PPy/AL electrodes, however, show between 20-30% higher capacitance than the films with SLS. 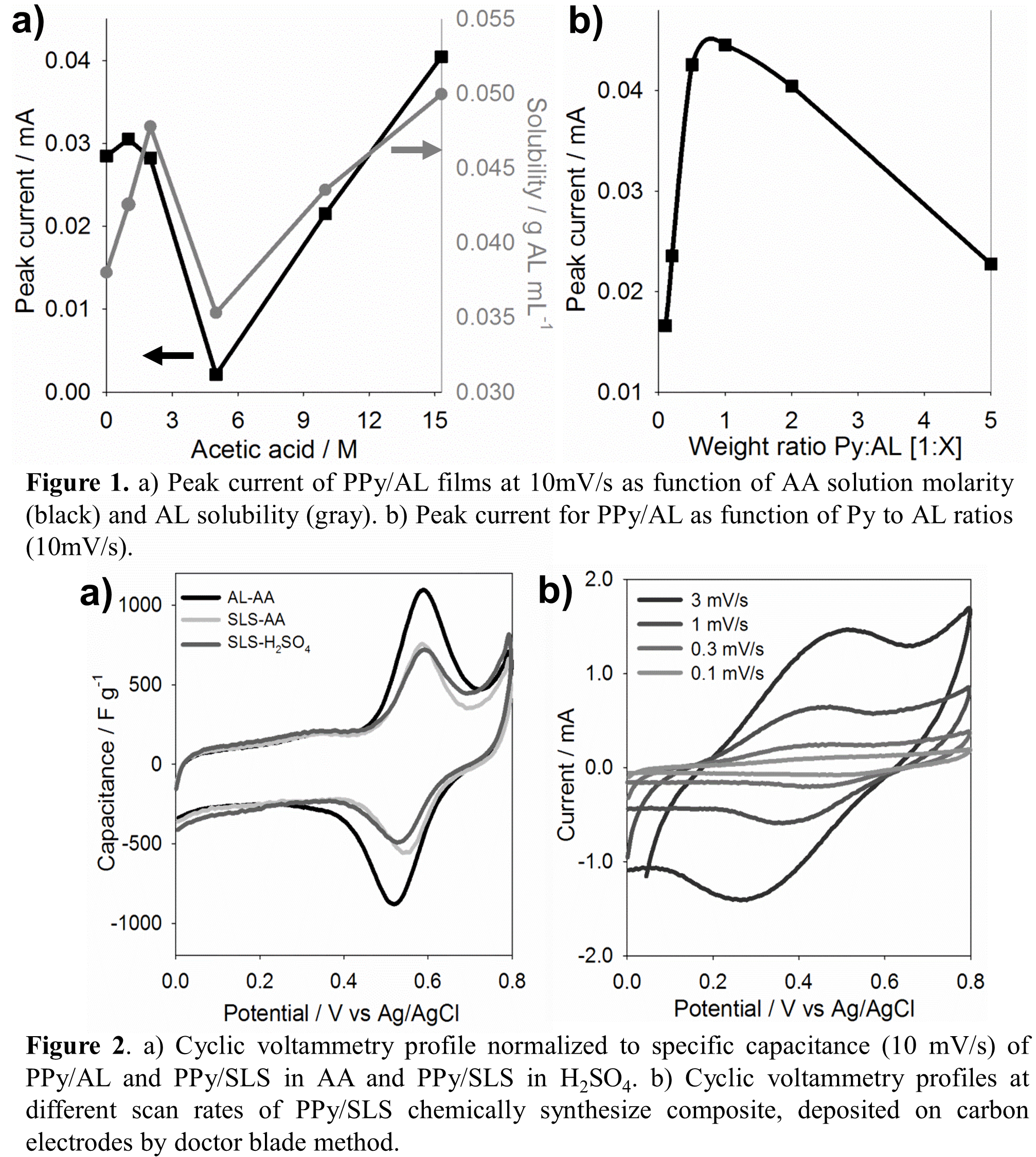