Chemical and thermal stability are the key bottlenecks of conventional graphite anodes used in the li-ion batteries today. Graphitic materials are the most common anode active materials mostly due to their high specific capacity and relatively low cost. On the other hand, drawbacks like low stability of solid electrolyte interface layer protecting it from spontaneous reaction with electrolyte and the risk of thermal runaway are more and more evident with rising of interest in the electro mobility and EV.

One of the most promising successors in the field of lithium anode active materials is the group of ceramic materials based on titanium oxide. Their thermal and chemical stability is incomparable with graphitic materials – they are almost inert and due to higher operation voltage they do not suffer from irreversible capacity loss as a result of SEI layer formation.

This work deals with structural and electrochemical characterisation of monoclinic TiO2 as anode active materials for lithium-ion batteries.

Soft chemical synthesis was utilized for preparation of monoclinic TiO2 and precursors based on different layered alkali metal titanates were used. Titanates with formula A2TinO2n+1 form variety of layered structures for n between 3 and 6 with alkali metal cations A in the interlayer space. These structures are composed of corrugated layers of TiO6 octaedra which can share edge or corners to form stepped layered structure. The step length for a given composition is determined by the A+ to Ti+ ratio and is in correlation with the ability to form monoclinic TiO2.

Alkali titanate precursors in the form of K2Ti4O9 and Na2Ti3O7 were prepared by high-temerature solid-state reaction and by hydrothermal synthesis respectively. Subsequent ionic exchange of K+ to protons was made and resulting protonated titanate was dehydrated at slightly rised temperature.

The influence of precursor structure and dehydratation temperature on electrochemical properties as anode material for li-ion batteries was investigated by cyclic voltammetry, galvanostatic cycling, electrochemical impedance spectroscopy and rate capability. Physical characterization by XRD, SEM and BET was provided. 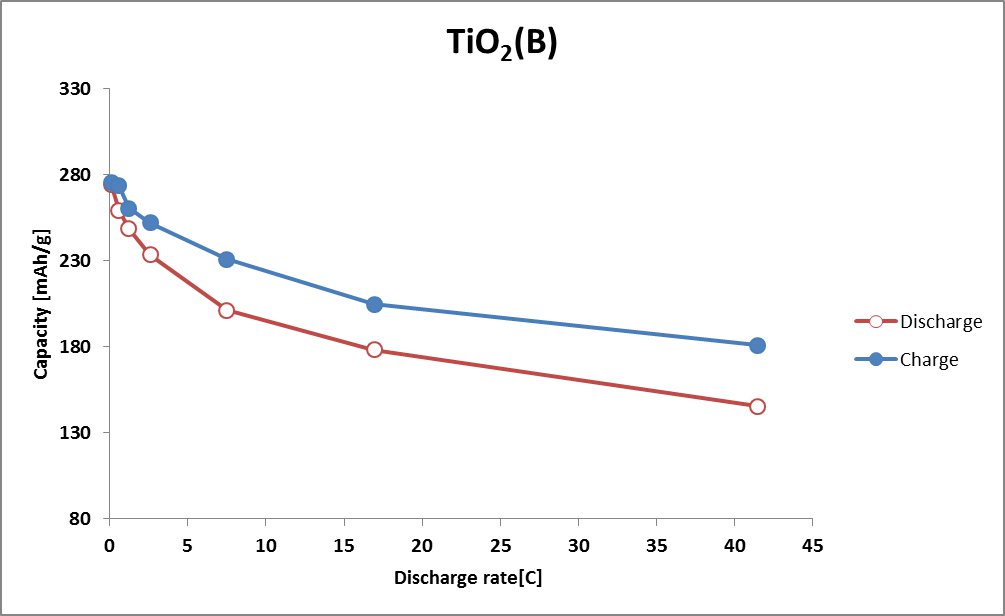