Boulevard Room C (Hilton Chicago)
V. Wilde (Karlsruhe Institute of Technology), H. StŲrmer (LEM, Karlsruhe Institute of Technology (KIT)), J. SzŠsz, F. WankmŁller, E. Ivers-Tiffťe (IAM-WET, Karlsruhe Institute of Technology (KIT)), and D. Gerthsen (LEM, Karlsruhe Institute of Technology (KIT))
High efficiency at low operating temperatures is essential for present and future solid oxide fuel cell (SOFC) applications. This requires the selection of materials with compatible physical and chemical properties for the different SOFC components.  La0.58Sr0.4Co0.2Fe0.8O3-δ (LSCF) has been shown to be a highly performing cathode material [1] while 8 mol% Y2O3-doped ZrO2 (YDZ) is still the state-of-the-art electrolyte material. However, it has been shown that an insulating SrZrO3 (SZO) interlayer forms between LSCF and YDZ during temperature treatment exceeding 900 °C, drastically reducing SOFC performance [2]. One idea of overcoming this problem is the introduction of a chemically compatible electrolyte material, like Gd2O3-doped ceria (GDC), at the interface between LSCF and YDZ. GDC acts as a diffusion barrier and prevents SZO formation. Goal of the present study is a detailed microstructural characterization of the LSCF-GDC-YDZ interfaces by analytical transmission electron microscopy (TEM). We focus particularly on the effect of the GDC sintering temperature on SZO formation.

Symmetric-cell samples were fabricated by screen-printing a 5 µm thick Gd0.2Ce0.8O2-δ(GDC) layer on both sides of YDZ substrates. GDC sintering was performed at 1100°C, 1250°C or 1400°C for 3 hours, followed by screen-printing a LSCF layer on top of the GDC. A sintering temperature of 1080°C was used for all LSCF cathode layers. The samples were studied after GDC sintering (i.e. before LSCF deposition), after LSCF sintering and after electrical characterization at application-relevant temperatures (500 – 800 °C) [3]. The element distribution at the LSCF-GDC and GDC-YSZ interfaces, as well as the chemical composition within the layers themselves, were determined by energy dispersive X-ray spectroscopy (EDXS). Imaging was performed by TEM and high-angle annular dark-field scanning transmission electron microscopy (HAADF-STEM), complemented by selected area electron diffraction (SAED) for crystal structure analysis.

The study gives new insights into material interactions at the interfaces. Figure 1 shows an overview HAADF-STEM image of the LSCF-GDC-YSZ interface region in the sample with 1100 °C GDC sintering temperature, after LSCF deposition and electrical characteri­zation. It can be clearly seen that the GDC layer has a thickness of approximately 5 µm and partially retains some porosity after fabrication. Moreover, an inter-diffusion region between YDZ and GDZ is revealed by HAADF-STEM (arrows in Figure 1), suggesting chemical composition variation. Hence, detailed elemental distributions of the YDZ-GDC interface were determined using EDXS mapping. Figure 2 shows (a) the HAADF-STEM image of the interface region and (b) the Zr, (c) the Gd and (d) the Sr elemental distributions in the YDZ-GDZ interface region. It is of particular interest that a substantial Sr concentration (Fig. 2(d)) is observed between GDC and YDZ, despite the GDC diffusion barrier layer. This indicates Sr transport from the LSCF cathode through the porous GDC layer. The same region also contains Zr (Fig. 2(b)) which indicates SZO formation. In addition, a second phase containing up to 30 at% Gd (Fig.  2(c)) is observed between SZO and YDZ. Crystal structure determination by SAED is currently in progress. We will also demonstrate that the GDC sintering temperature strongly influences SZO interlayer formation. While the SZO layer is continuous for 1100 °C GDC sintering temperature, sintering at 1400 °C strongly reduces SZO layer formation. In contrast, the Gd-rich layer between GDC and YDZ increases in thickness with increasing GDC sintering temperature. We will discuss the origin of the phase formation between GDC and YDZ and the effects of this microstructural development on electrochemical SOFC performance. 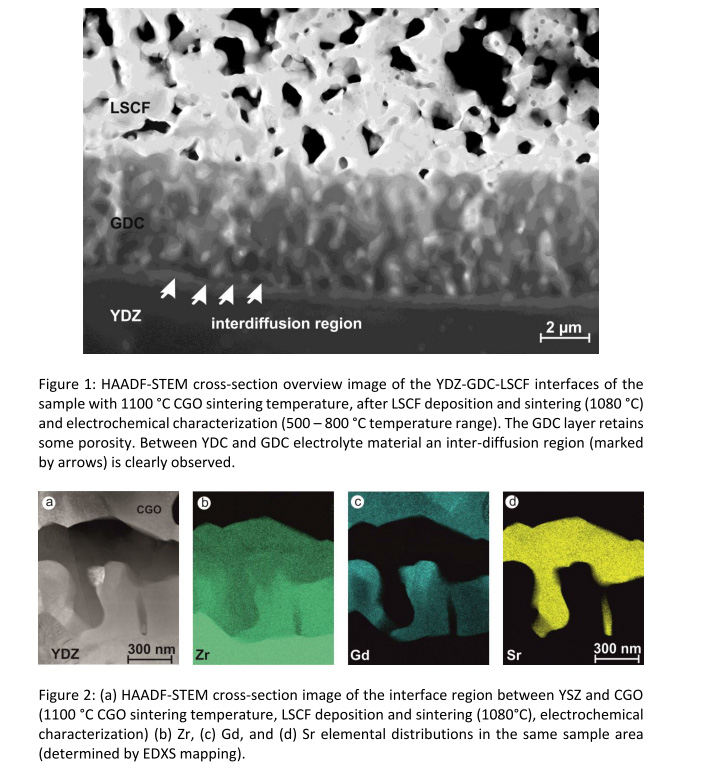