Williford Room A (Hilton Chicago)
A. Bhowmik, H. A. Hansen, and T. Vegge (Technical University of Denmark)
Electrocatalytic reduction of CO2 to liquid fuels using energy from renewable sources has the potential to form the basis of a carbon neutral sustainable energy system, while integrating seamlessly in the established infrastructure1. Storing intermittent renewable energy in a chemical fuel is especially attractive to achieve high energy density required for transport applications. Among the metals, Cu electrocatalyst can convert CO2 to methane and ethylene in aqueous electrolytes at ambient temperature with moderate efficiency2. However, a high overpotential is required for this reaction and almost no alcohols are produced. Experimental studies have shown that mixed rutile oxides (Ru/Ir/Ti) can catalyze the conversion of CO2 to alcohols3-5. However, very little is known about the reduction of CO2to alcohols on oxide electrocatalysts.

Here, we present a computational study of the thermo-dynamics of the 6e- reduction of CO2 to methanol on substituted RuO2 (110) surfaces. We replace the Ru atoms in top layer with ten other transition metals, which in their +4 oxidation state have ionic radius comparable to Ru in octahedral coordination. The substituted surfaces show large variations in surface reactivity enabling us to explore the reduction of CO2to methanol in a wide materials window.

We use the computational hydrogen electrode model6 to calculate the potential dependent reaction free energies from density functional theory based calculations using BEEF-vdW functional and PAW method as implemented in VASP. We consider corrections for zero point energy, heat capacity, entropic contribution and other energy correction for CO2 and H2 molecule7. The simulation model employs ¼ monolayer of CO coverage as spectator species to emulate the presence of CO produced simultaneously by reduction of CO2.

We show the electronic binding energies for reduction intermediates such as O, OCHO, HCOOH, and H2COOH scale linearly with that of OH on partially CO covered, reduced rutile surfaces. This scaling can be rationalized, by the fact all these adsorbates bind to the surfaces through the oxygen atoms. This enables us to describe the theoretical electrochemical potential required to drive the reaction as a function of the OH binding energy. Considering the OH binding energy as the prime descriptor, we can establish a volcano plot for this reaction (Figure 1). For surfaces binding OH very strongly e.g. Nb, removal of OH from active site is the most endergonic step. On the contrary, surfaces binding OH weakly e.g. Pd will need large reducing potential to protonate HCOOH to methanol. While surfaces with Ir, Sn or Pt have optimal OH binding energy, for efficient methanol production, it is also important the HCOOH intermediate is bound sufficiently strongly to be further reduced to methanol. A third condition is to increase the overpotential for the parasitic production of hydrogen as much as possible. These parameters are also considered in order to evaluate the suitability of the substituted surfaces towards electrocatalytic production of methanol.

We would like to acknowledge the Lundbeck Foundation for financial support of this work.

Figure 1: Theoretical activity volcano as a function of the OH binding energy on substituted surfaces. The line is drawn to guide the eye. Atomistic structure of the iridium substituted system is given. 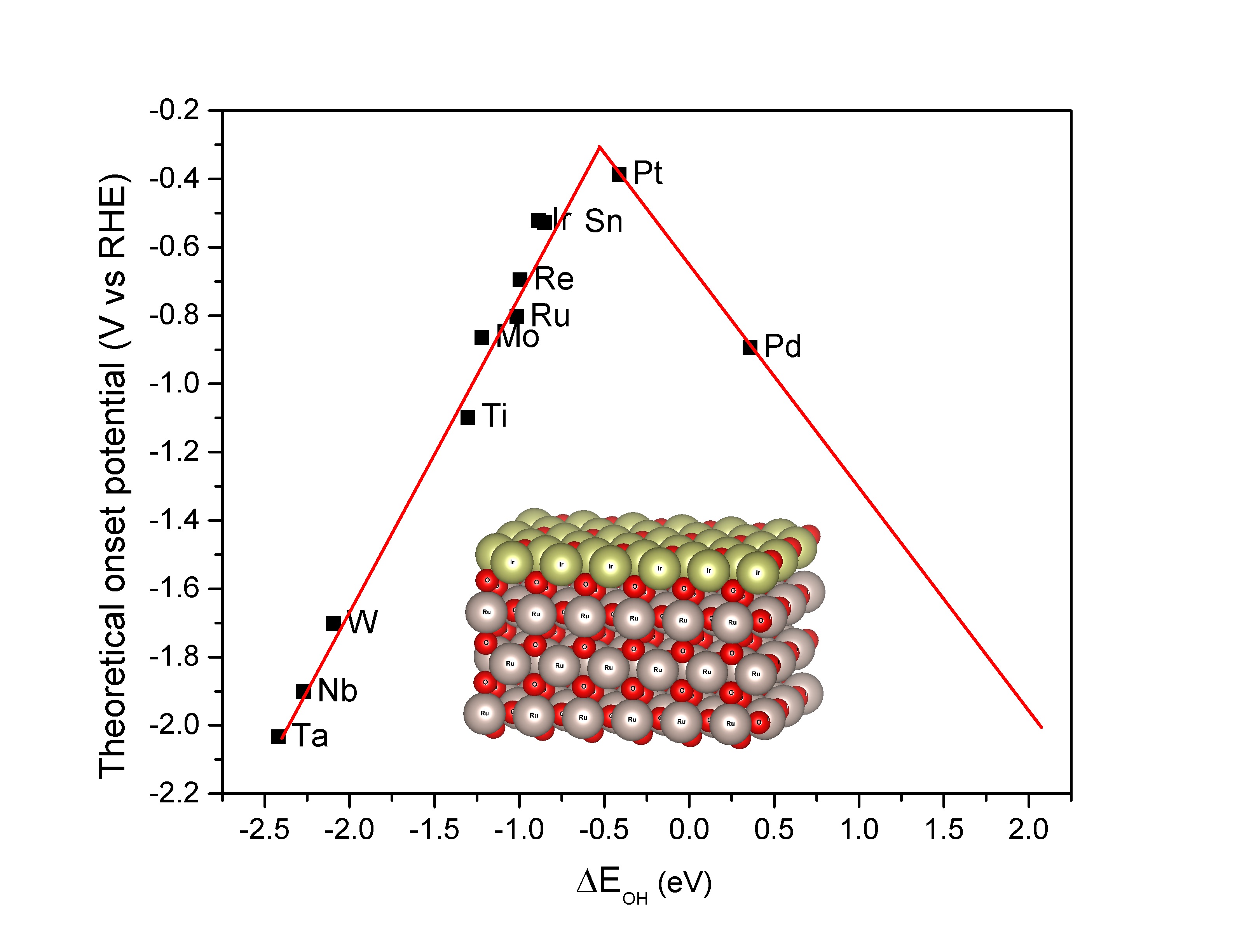