The oxygen reduction process on cathode is large source of resistance in Solid Oxide Fuel Cell (SOFC). To minimize the resistance on cathode, exploring new materials that exhibit fast oxygen reduction process is necessary. LaNiO3-δ is one of the candidates for cathode of SOFC. The Ni in B site of perovskite-type structure form octahedron with the oxygen and control the electronic conduction mechanism. Several works mention that LaNiO3-δ has high performance on the electrical conductivity [1]. However, it suffers from the degradation above 1123 K in air due to the chemical instability. The Ni in the perovskite-type structure is unstable since Ni tends to become Ni2+ instead of Ni3+ [1,2]. Many workers studied the La2NiO4-±for cathode SOFC due to its stability and shows good performance on electrochemical properties.

In our study, the stability of LaNiO3-δ was examined with assumption the LaNiO3-δ may be stable in the range of intermediate temperature. In this study, the LaNiO3-δ were examined its stability as function of temperature (773 – 1073 K) by thermogravimetry and coloumetric tritration. Moreover, the electrochemical impedance spectroscopy (EIS) measurement was also performed to see the electrochemical properties of LaNiO3-δ.

LaNiO3-δ was synthesized by the Pechini method and sintered at 1073 K for 6 hours. The single phase of the sample was confirmed by X-ray diffraction. For coulometric titration, the powder of LaNiO3-δwas pressed into a pellet and sintered at 1073 K for 6 hours. An yttria stabilized zirconia (YSZ) tube was used as an electrolyte. The sample powder of 0.5 gram were lumped into the inside of the tube and mechanically crushed and pressed in order to get contact with YSZ. The platinum paste was painted on the outside of the YSZ tube.  The measurement was taken by “two-step-forward and one-step-back" to check the reproducibility on the coulometric titration. The oxygen nonstoichiometry was determined by the electric charge which passed through into the cell as described by the equation:

Porous LaNiO3-δ was painted into the both sides of Ce0.9Gd0.1O1.95 (GDC) electrolyte. Pt electrodes were used as a reference electrode. Electrochemical properties of the porous LaNiO3-δ electrode were investigated by using impedance spectroscopy in a single chamber cell as functions of temperature (773 – 1073 K) and oxygen partial pressure (10-3-1 bar). In the analyses of the impedance responses, tentative equivalent circuits of R-C elements (a resistance, and a capacitance) were used to identify their physical meanings.

The EIS results on LaNiO3-δ porous electrode showed polarization on the low frequency arc. The low frequency arc was assumed to associate with the oxygen reduction process at the electrode. As shown in Fig. 1(b), the area specific conductivity (ASC) of the LaNiO3-δ as a function of temperature and oxygen partial pressure. In our previous works on Ni based electrode (La(Ni,Fe)O3 and La(Ni,Co)O3), the LaNiO3-δ shows better performance on ASC. Even though, the measurement successfully achieved, but the secondary phase may appear during the measurement of oxygen nonstoichiometry and electrochemical properties. The LaNiO3-δ electrode suffers from the degradation around 1073 K and shows poor reproducibility. Therefore, the phase stability window of LaNiO3-δ needs to be determined. The measurement by high temperature X-ray diffraction is important to determine the phase relationship of the LaNiO3-δ. 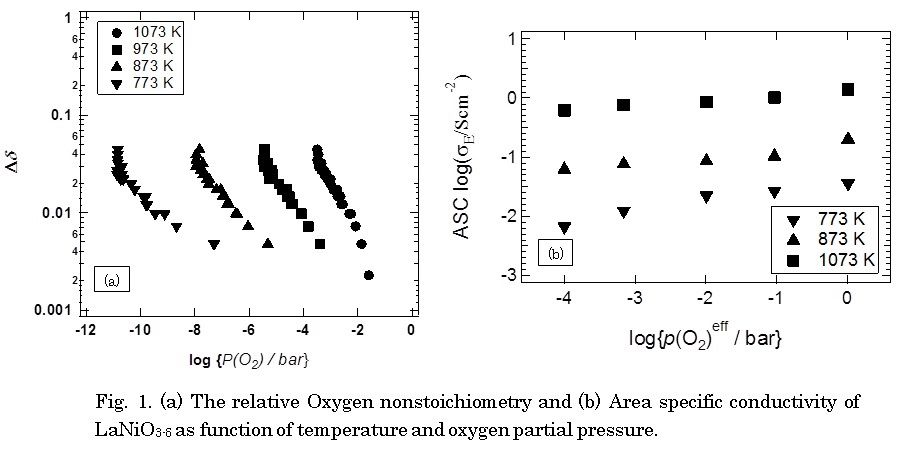