PDR 3 (Hilton Chicago)
X. Gao, A. Omosebi, J. Landon, and K. Liu (University of Kentucky)
Capacitive deionization (CDI) is an alternative and maturing technology for desalination, which may have potential advantages over current methods in that no heat-treatment and no high pressure are required.1Like electric double-layer capacitors (EDLCs), a CDI cell adsorbs and desorbs ions by electrostatic force generated at polarized electrodes. Unlike EDLCs, a CDI cell often treats salt solutions only at a few millimoles in concentration.

Because of the dilute solution used (e.g., NaCl), the Gouy-Chapman-Stern (GCS) model for the electrochemical double-layer predicts that the electrosorption capacitance at an electrode will display a least value at (or near) a potential in a plot of potential vs. capacitance.2 This characteristic potential is called the potential of zero charge (PZC), which can be recognized as a transition stage for the surface charge, e.g., cation-adsorption/anion-desorption begins simultaneously as the applied potential negatively passes the PZC, and vice versa.3Due to the lack of substantial electrochemically active redox species, it is difficult to generate a thermodynamically predicted potential distribution for a CDI cell. Therefore, we expect that the PZC location in the working voltage window should play a key role on desalination performance in a CDI cell.

Based upon our earlier results,4 Fig. 1 summarizes the effect of PZC relocation on the CDI performance for long-term operation using carbon xerogel (CX) materials. At the beginning, both EPZCs for the pristine electrodes are located in the cathodic working domain, which means that a part of the driving force (|EPZC- - Eo|) at the cathode is consumed by parasitical anion adsorption-desorption. During operation, the EPZC for the cathode (EPZC-) is almost stationary whereas the EPZC for the anode (EPZC+) is shifted into the anodic working domain. Thus, the driving force created (|EPZC+ - Eo|) for cation adsorption-desorption paired with the present driving force (|EPZC- - Eo|) for anion adsorption-desorption contributes to the inversion spikes observed. With polarity reversal, both EPZC’s are placed beyond their respective working domains. Therefore, the highest performance should be obtained when the polarity of the electrodes were reversed. During extended cycling, due to carbon oxidation at the anode, the EPZC for the new anode (prior cathode) is relocated into its respective working domain, but the EPZC for the new cathode (prior anode) remains at nearly the same location due to insufficient reducing potentials at the cathode to negatively shift the EPZC. Thus, the EPZC for both electrodes are eventually located in the anodic working domain. Under such a condition, the performance is limited at the anode, which is opposite to the beginning. In summary, we conclude that performance degradation is always related to PZC relocation due to electrochemical oxidation at the anode, which agrees with Cohen et al. that the minimization of anode oxidation is one of the key challenges for further development of carbon electrodes for CDI applications.5

In this presentation, we will show the effect of the location of EPZCin the respective working potential domain on the electrosorption performance. We will further report several alternative CDI operational methods in order to mitigate effectively the performance degradation/variation for long-term CDI operation.

The authors are grateful to the U.S. - China Clean Energy Research Center, U.S. Department of Energy for project funding (No. DE-PI0000017). 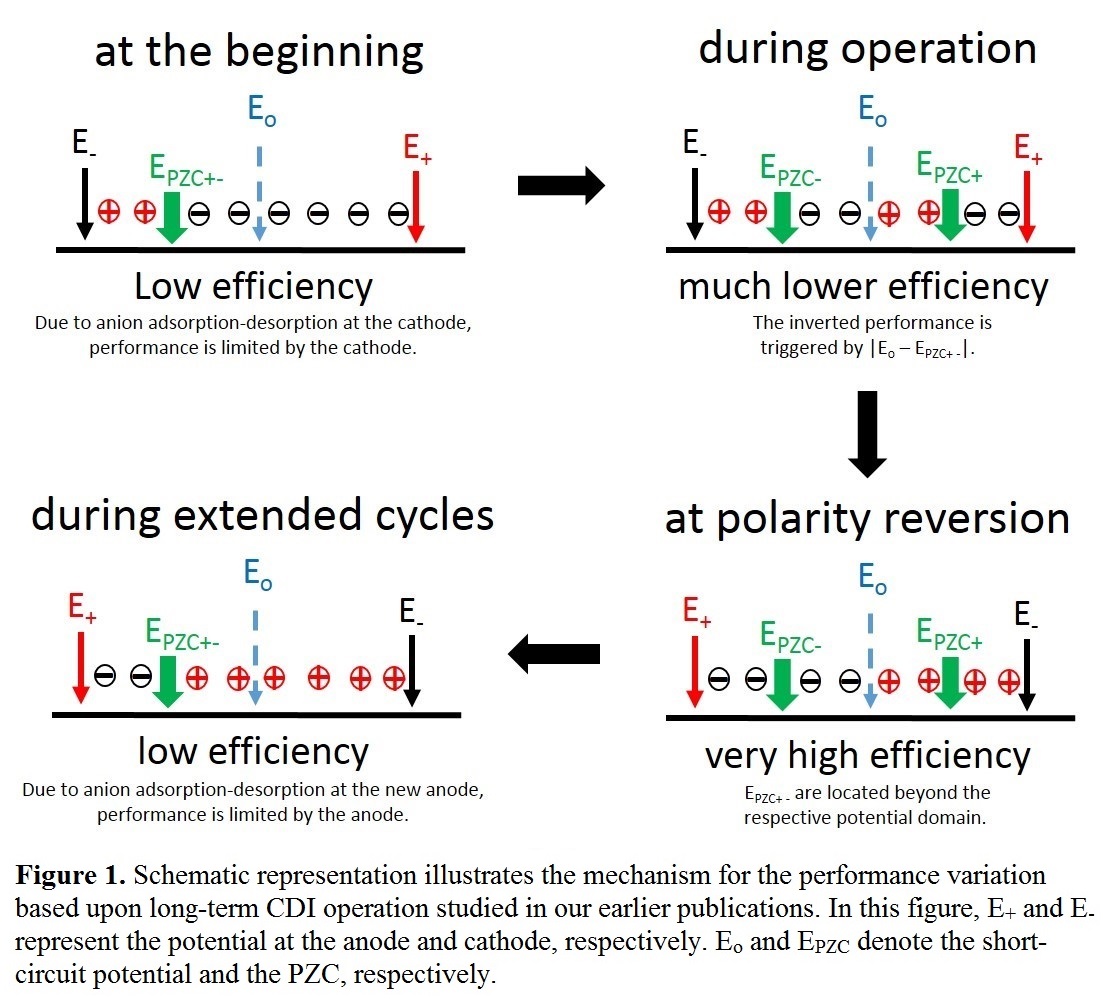