Lake Erie (Hilton Chicago)
K. Ohkubo, N. Kohno, Y. Yamada, and S. Fukuzumi (Osaka University)
Carbon nanomaterials have been extensively studied for energy and environmental applications. Metal-free nanostructured elemental carbons and carbon-based composites have proven to be attractive alternatives to conventional metal-based catalysts for several important chemical reactions such as dehydrogenation, oxygenation and Friedel-Crafts reactions. In particular, single-walled carbon nanotubes (SWCNTs) have been of great interest to researchers because of their unique structures and physical properties. SWCNTs have been proposed as an advanced metal-catalyst support for electrochemical catalysis. However, there is no report that SWCNTs itself is used as a photocatalyst under ambient conditions due to the poor photochemical and excited properties.

Catalytic hydrogen (H2) evolution systems have been extensively studied because hydrogen is a clean energy source for the future, which should reduce dependence on fossil fuels and emissions of greenhouse gases in the long term. In many cases, noble metals such as platinum and semiconductors have been used as composite photocatalysts. However, there is no report on photocatalytic metal-free H2-evolution system using pure carbon material alone as a photocatalyst. We report herein efficient H2evolution from benzene and benzene derivatives using metal free SWCNTs alone as a photocatalyst under visible laser light irradiation (532 nm) at room temperature.

Laser pulse irradiation (λ = 532 nm; 500 mW; 10 Hz) of a deaerated benzene solution (2.5 mL) containing dispersed metal-free SWCNTs (0.15 mg) resulted in efficient hydrogen evolution. The amount of hydrogen evolved by laser irradiation for 2 h reached 100 mmol (2.2 mL). When benzene was replaced by deuterated benzene (C6D6), the deuterated hydrogen molecules such as D2 and HD were also evolved efficiently. The initial rate of hydrogen evolution was 21 mmol h–1 with 50 : 1 ratio for D2 and HD, respectively. The KIE (kinetic isotope effect) value was 2.4. These results indicate that the hydrogen source is benzene. The products derived from dehydrogenation of benzene were determined by the GC-MS and HPLC analyses to be biphenyl, terphenyls, and terphenylene. The stoichiometry to produce H2and biphenyl from benzene is given by eq 1.

The dependence of the rate of H2 evolution on the laser intensity was examined using different laser power intensities at 532 nm (0 – 82 mJ pulse–1). The initial rates of H2evolution are proportional to the fourth power of laser intensity. This suggests that a bimolecular reaction of two-photon absorbed species may be involved in the photocatalytic hydrogen evolution.

On the basis of above-mentioned results, the plausible photocatalytic mechanism for hydrogen evolution in benzene is shown in Scheme 1. SWCNT was excited by two photons to form doubly excited SWCNT (SWCNT**). SWCNT** can reduce benzene to produce benzene radical anion (C6H6•–) and the one-electron oxidized SWCNT (SWCNT•+) with the rate constant of ket1. Dimerisation of C6H6•– occurs accompanied by hydrogen evolution to produce biphenyl dianion [(C6H5)22–]. Such hydrogen evolution via radical coupling of C6H6•– has previously been reported for reduction of benzene with cesium nano carbon catalyst.3 (C6H5)22– can reduce benzene to produce C6H6•– and biphenyl radical anion [(C6H5)2•–] in benzene. Back electron transfer from (C6H5)2•– to SWCNT•+ results in formation of biphenyl [(C6H5)2], accompanied by regeneration of SWCNT. On the other hand, C6H6•– can reduce SWCNT to produce SWCNT•– and C6H6. The charge recombination from SWCNT•– to SWCNT•+also regenerates SWCNT. The overall stoichiometry of the photocatalytic cycle in Scheme 1 agrees with eqn (1). 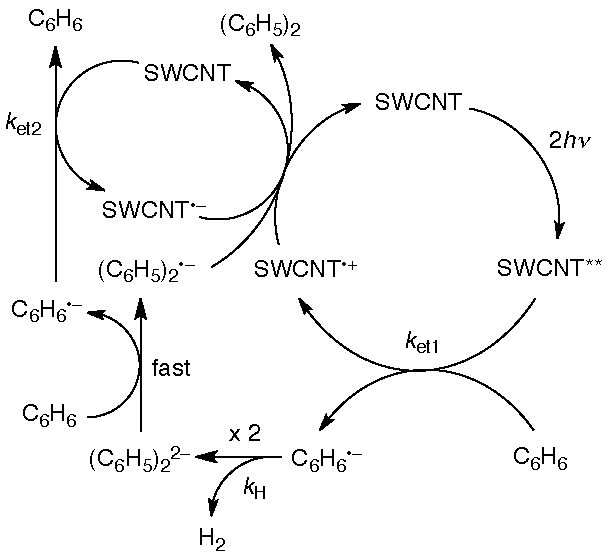