Na3Ni1.5Zn0.5SbO6 was synthesized by conventional solid state synthesis route using Na2CO3, NiO, ZnO and Sb2O3 as raw precursors. Raw precursors were milled together in appropriate ratio for one hour and compressed in the form of pellet. Finally the pellets were calcined at 1020 oC and quenched down to room temperature using liquid nitrogen. Synthesis material was immediately transferred to the glove box to avoid any moisture exposure. Preliminary structural characterizations have been performed using X-ray diffraction. The microstructure of the material has been observed by scanning electron microscopy. To evaluate the electrochemical performance of the electrode material, active material was coated over the aluminum foil by mixing it with Polyvinylidene fluoride (PVDF) and carbon black in the ratio 75 (AM):10 (PVDF):15 (CB). Slurry of the finally obtained composite was made using NMP as solvent. Coated foil was dried under vacuum at 120 oC for two hours and then punched in the form of the circular disc and compressed. The half cell batteries were finally assembled in the CR2032 coin cells. Three different electrolytes have been studied for this compound, i.e., 1M NaFSI, 1M NaClO4 and 1M NaPF6in PC. The initial voltage cutoff limits were set as 4.2 – 2.5 V.

It has been observed that it is not possible to reach 4.2 V during the first charging cycle using 1M NaFSI in PC. This is due to the corrosion of the aluminum current collector that is expected at this voltage limit of the charging. Therefore for the further cycles the voltage cutoff limit was set at 4.0. Even though the cell was able to cycle, the signature of aluminum corrosion can be clearly observed. Performance of the material using 1M NaClO4 and 1M NaPF6 in PC has also been checked. No electrolyte decomposition or corrosion issues have been observed using classical liquid electrolyte with organic solvent (Fig. 1). The detailed electrochemical properties of Na3Ni1.5Zn0.5SbO6 in various electrolytes will be discussed. Na3Ni1.5Zn0.5SbO6shows initial discharge capacity of 115 mAh/g with an average operating voltage of ~ 3.3 V and stable capacity over 100 mAh/g for the first 20 cycles. 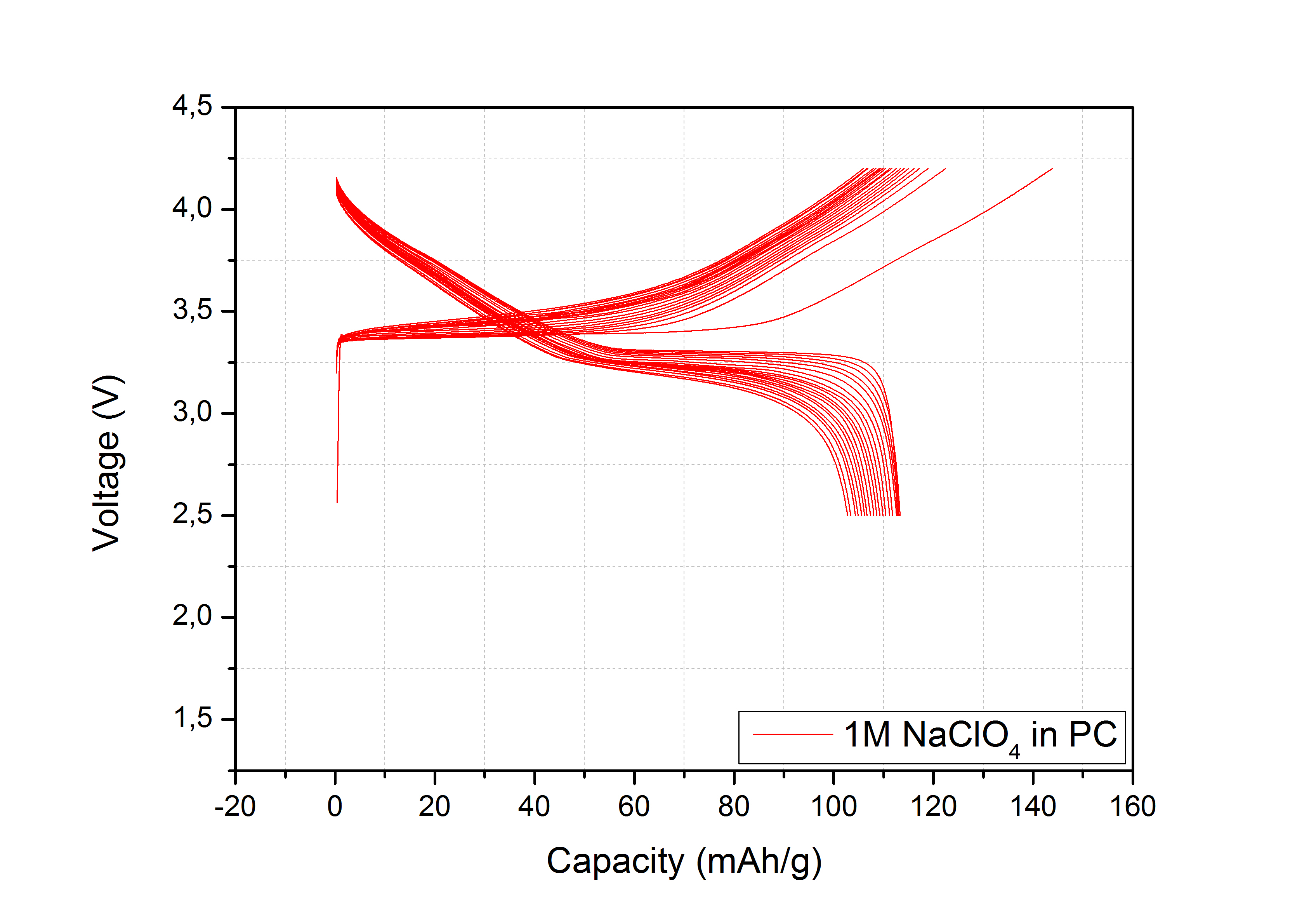