Conference Room 4B (Hilton Chicago)
D. L. Fritz III (Forschungszentrum Jülich GmbH), M. Carmo (Forschungszentrum Juelich GmbH), M. Müller (Forschungszentrum Jülich GmbH, Germany), and D. Stolten (Forschungszentrum Juelich GmbH)
The ever growing demand for renewable energies is currently focused primarily on wind and solar energy. The technologies that capture these renewable energies have developed greatly in the past few decades with an ever increasing installed capacity all around the world. This capacity is however limited by grid demand and intermittency of the source1. In order to fully utilize the installed capacity of sustainable and renewable energy harnessed in wind and solar farms the energy collected at off-peak hours needs to be stored. By coupling a water electrolyzer to the wind and solar power farms the normally unutilized wind and solar energy can then be stored as hydrogen2. Hydrogen has a distinct advantage over other storage methods such as batteries, compressed air or pumped water as it can be stored and then employed into a variety of applications. The stored hydrogen could be used to fuel transportation, process chemicals, produce fertilizers and regenerate electricity1. Hydrogen also shares the ability to be produced, stored and distributed locally or centralized making it a versatile solution that can be brought very quickly into real, already existing commercial markets1.

The major hurdles facing PEM electrolysis before it can truly and competitively enter commercial markets, is the cost of production and the operational cost of the system. The production costs have been a major focus of research since 2010, and a 41% reduction in cost has been shown at the stack level alone in the past 5 years3. The reduction of operational costs and increase in life expectancy and performance of the stacks also plays a critical role in the overall cost of hydrogen production. Some external factors such as poor water supply quality, hot spots from areas of high contact resistance or uneven loading of the catalyst layer, or even blockages in the flow-fields may limit a PEM electrolysis systems lifetime as well as its performance.

In this article the effect of a blockage, as well as multiple blockages in a parallel flow channel were investigated using a segmented cell capable of reading temperature and current distribution over the entire active area of the test cell. A blockage in the flow-field could arise in an electrolysis cell through a large variety of sources, broken pieces of sealing material, poor water quality, large particles from corroded supply tubing and errors made during assembly. This could cause increases in mass transport losses and increased degradation rates on the rest of the cell. The cells operating parameters were also varied to explore and determine how to mitigate the effects a flow blockage has on cell performance. 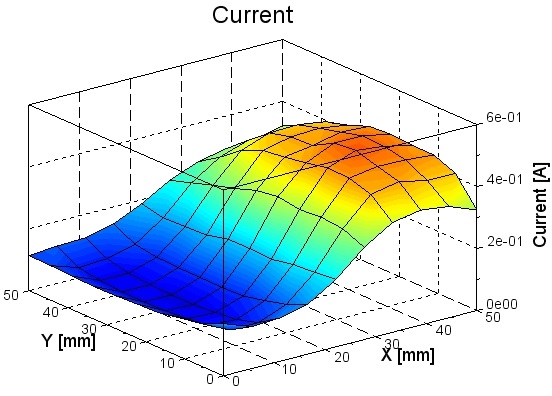