Theoretically, there should be no electron-transfer across the electrode-electrolyte interface, but parasitic side-reactions occur and slowly deteriorate the cell characteristics. The electrode material used in supercapacitors is microporous, graphitic carbon which provides a large surface area and a mostly inert behavior towards other components. But depending on applied voltage and temperature, the side-reactions block micropores and cause a dropping capacity and a rising internal resistance [2].

The scope of this work covers experimental results from post-mortem analyses which give some insight into possible ageing mechanisms.

Beforehand, capacitors were strained by accelerated, calendric tests with different temperatures and voltages. It was assumed that a T = 10 K and a V = 100 mV difference to the standard test parameters would halve or double the lifetime. The supercapacitors were aged until the rising resistance and dropping capacity prevented accurate measurements.

Since commercial cells have been tested instead of using experimental test set-ups, variations in material quality are ruled out and thus the supercapacitor behavior can be narrowed down to the electrochemical processes.

The cells have been provided by WIMA (600 F) and the setup uses alumina current collectors and casings, carbon-based electrodes, a polypropylene separator and an acetonitrile-based electrolyte. The salt used is tetraethylammonium tetrafluoroborate (TEABF4).

Afterwards, post-mortem studies have been carried out by opening the casing and disassembling the cell itself.

It has been found, that the positive electrode (here anode) is seemingly more affected. Thus the results, on the one hand, are presented with respect to the progressive ageing and on the other hand show the differences between positive and negative electrode.

To do so, the electrodes have been investigated after the cell opening. First of all, the mechanical parameters (e.g. thickness, mass) have been observed. For example, a significant gain in weight of the positive electrode could be observed: at the end of testing a weight change of several grams could be measured. The carbon surface was optically investigated by confocal lasermicroscopy and defects and residues from decomposition products could be illustrated. Figure 1 shows a highly strained positive electrode; layer formation and cracking can be observed.

These initial investigations have been followed up by structural analysis of the graphitic carbon. A good tool for surface characterization of carbonaceous material is Raman-spectroscopy which gives further insight into the crystalline properties: phonon vibrational modes are excited by laser and changes in the crystallinity of the surface affect the measured intensity (see fig. 2).

The measurements show that the structural integrity is affected by the progressive ageing and that the anode and cathode behave differently. Furthermore, phase identification was carried out by x-ray diffraction.

The weight gain of the positive electrode gave rise to chemical analysis: inductively-coupled plasma optical emission spectroscopy was carried out to match the weight change to elements. The amount of Boron and alumina present in the respective electrodes was observed and matched to the ageing matrix. 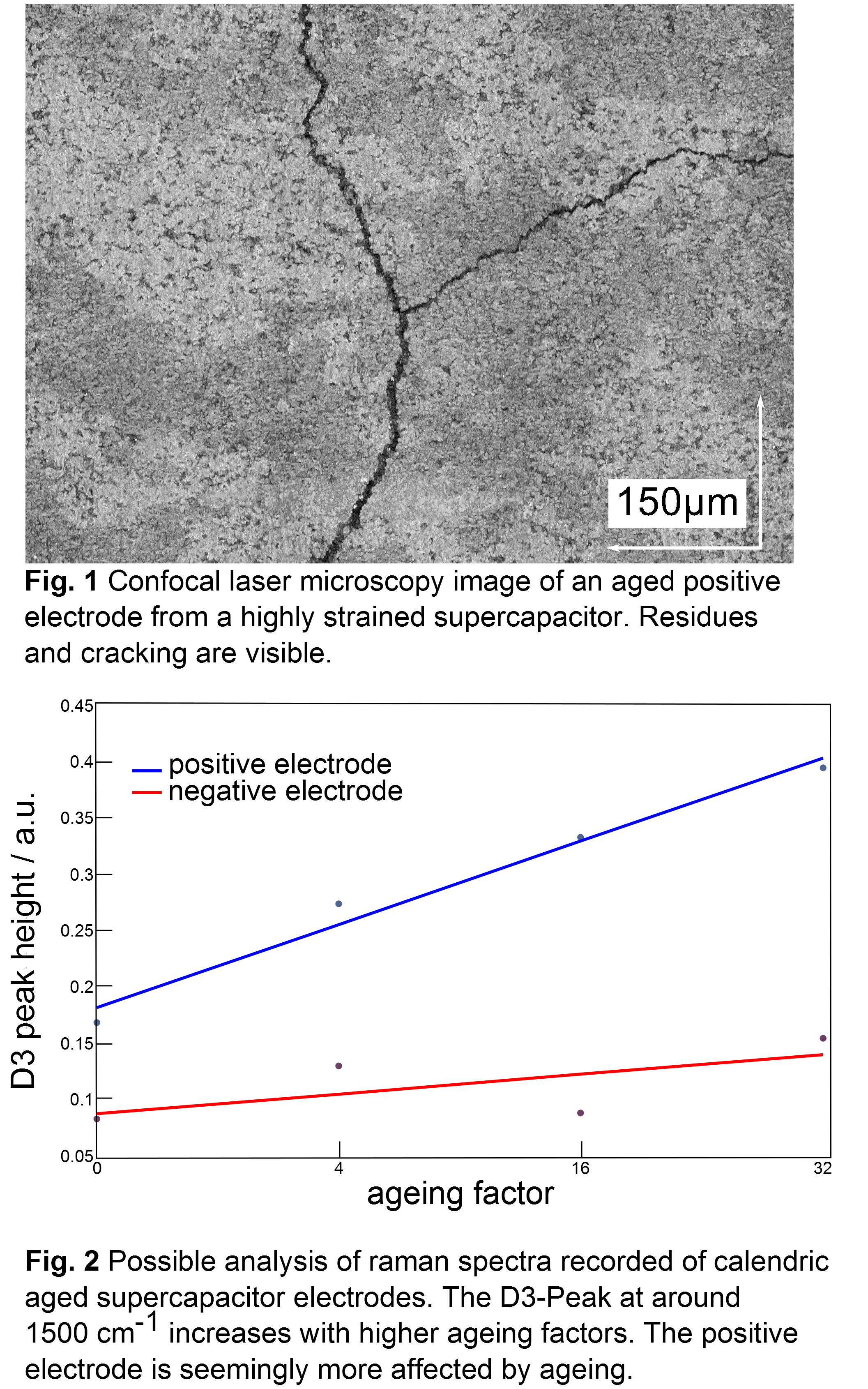