Salon A-5 (Hilton Chicago)
V. Simone, L. Simonin, and S. Martinet (CEA-LITEN)
Nowadays, lithium ion (Li-ion) batteries are present in many applications such as mobile phones, computers, hybrid electric (HEV) and electric (EV) vehicles. However abundance, cost and especially accessibility of lithium may bring some issues for Li-ion development in the future [1]. This leads the scientist community to go back to sodium ion battery research, which stopped because of Li ion battery success in the 80’s. Sodium seems to be an interesting alternative to lithium because of its abundance and availability. However, in order to be competitive to other technologies in stationary domain, for instance, capacity, rate capability and cycle life should be improved [2].

Carbon nanotubes made from polyaniline pyrolysis showed interesting performances. A reversible capacity of 250 mAh/g at a current density of 50 mA/g was obtained with 82% of capacity retention after 400 cycles. However the initial coulombic efficiency remains very low (around 50%) [3].

Ding et al. [4] tested carbon made from peat pyrolysis as anode for Na ion batteries. They obtained a reversible capacity of 255mAh/g after 200 cycles with a current density equal to 50 mA/g.

In our study, hard carbons (HC) were made from cellulose. Different final pyrolysis temperatures were studied from 700°C to 1600°C. Characterisation methods such as Small Angle X ray Scattering (SAXS) measurements; isotherms and Transmission Electron Microscopy (TEM) were performed in order to understand the impact of pyrolysis temperature on carbon structure. This parameter plays a major role on external and internal porosities. Different electrochemical tests were performed to study stability and rate capability of the samples. Figure 1 shows the cycling performances of the sample pyrolysed at 1400°C.

In our presentation, we propose to highlight the characterisations performed on these hard carbons. TEM images could clearly show the different graphene sheet arrangements. With the tests performed on Na//HC cells, we will try to correlate hard carbon structure to electrochemical performances. Perspectives on future studies will be also exhibited. 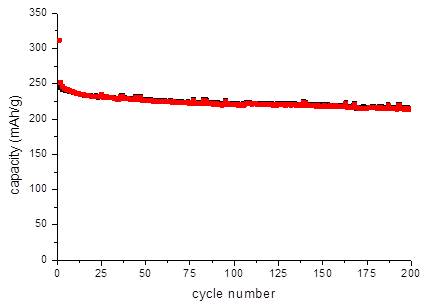