Williford Room A (Hilton Chicago)
K. Tammeveski, M. Vikkisk, I. Kruusenberg (Institute of Chemistry, University of Tartu), U. Joost, E. Shulga, and I. Kink (Institute of Physics, University of Tartu)
A great deal of work has been made to develop new electrocatalysts for oxygen reduction reaction (ORR) in acid and alkaline media. In order to replace expensive and scarce Pt-based catalysts that have been primarily employed as cathode catalysts in low-temperature fuel cells, different carbon-based materials that possess lower price, better availability and improved chemical stability have been studied. Nitrogen-doped nanocarbons can be used as alternatives to Pt-based cathode catalysts. Previously, we have investigated the reduction of O2 on CVD grown nitrogen-doped carbon nanotubes,1 on CNTs heat-treated in the presence of urea2 and on N-doped graphene3 and few-layer graphene/multiwalled carbon nanotube (FLG/MWCNT) composites.4

In this work the electrocatalysis of oxygen reduction on nitrogen-doped carbon nanotube (NCNT) catalysts has been investigated. These NCNT materials were prepared from two different nitrogen precursors and acid-treated MWCNTs. Cyanamide (CM) and dicyandiamide (DCDA) were used as nitrogen precursors and the doping was achieved by pyrolysing MWCNTs in the presence of these nitrogen-containing compounds at 800 °C. The MWCNT-to-nitrogen precursor mass ratio was 1:20.

The N-doped carbon nanotube catalyst samples were characterized by scanning electron microscopy, Raman spectroscopy, and X-ray photoelectron spectroscopy, the latter method revealed successful nitrogen doping. The electrocatalysis of the ORR was studied in 0.1 M KOH on glassy carbon (GC) electrodes modified with N-doped CNT electrocatalysts employing the rotating disk electrode (RDE) method. The NCNT-DCDA material showed a better ORR performance than the NCNT-CM catalyst. Fig. 1 presents the ORR polarization curves on NCNT-DCDA at various rotation rates and Fig. 2 shows the Koutecky-Levich plots for this catalyst. As can be seen, the number of electrons transferred (n) is close to 4, which is advantageous from the point of view of fuel cell application. A comparison of the RDE results indicated that these metal-free NCNT catalysts possess remarkable electrocatalytic activity toward the ORR in alkaline media similar to that of commercial Pt/C catalyst (Fig. 3). The results obtained in this work are important for the development of Pt-free cathode catalysts for alkaline membrane fuel cells (AMFC). In the next stage of work these materials will be tested in AMFC conditions. 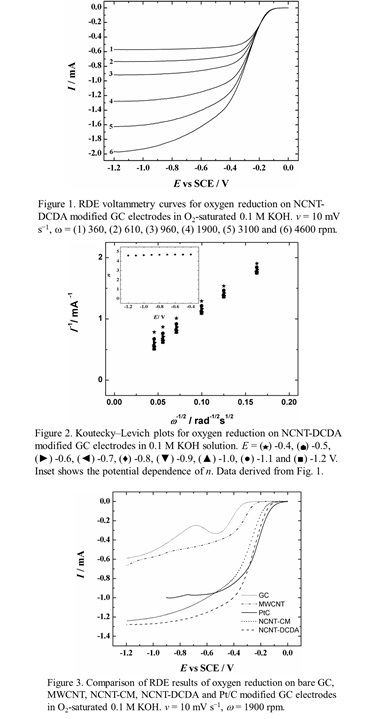