1214
Impact of Improvements in Energy Efficiency in Capacitive Deionization Systems

PDR 3 (Hilton Chicago)
J. Landon, X. Gao, A. Omosebi, and K. Liu (University of Kentucky)
Capacitive deionization (CDI) is a developing technology for water desalination applications with benefits over current methods such as reverse osmosis (RO) and distillation due to its operation at lower temperatures and pressure.  CDI uses small applied potentials (<2.0 V) to selectively separate ions from feed water streams by reversibly adsorbing these ions in the electric double layer of conductive, high surface area, and porous carbon electrodes.  This reversible absorption process can be used in a variety of configurations including flow-by, flow-through, and flowable electrode arrangements.1  Classic CDI systems have charge efficiency (equivalent charge of salt adsorbed per electronic charge input) values well below 100% due to parasitic discharge processes and Faradaic reactions.2,3 Therefore, ion-exchange membranes have been added into these systems to increase the effective adsorption capacity of the electrodes and limit the extent of parasitic processes.

Overall, CDI systems are considered to be more efficient than RO membranes for many lower concentration salt streams (<5000 ppm) due to differences in its separation mechanism.4  Shown in Figure 1 is an energy cost comparison of CDI and RO technologies as a function of salt concentration.  CDI is shown with energy recovery values of 0, 25, and 50%.  As the concentration of NaCl decreases, there is a distinct region where the energy cost of this separation can best RO.

The more recent addition of ion-exchange membranes in a membrane capacitive deionization (MCDI) process can further increase the charge efficiency to over 100% in certain instances and aid in further decreasing energy costs.5  The efficiency of both the CDI and MCDI process make them attractive options for many larger scale applications where energy cost becomes a dominant factor in choosing the water treatment system.  In this talk, a comparison between the energy costs of RO and CDI/MCDI will be given.  The use of recent surface chemistries to increase the charge efficiency will be shown to decrease the energy cost of CDI/MCDI processes further.  Finally, applications will be reviewed where CDI and MCDI can be used as a standalone option as well as interface with existing membrane processes.

The authors are grateful to the U.S. - China Clean Energy Research Center, U.S. Department of Energy for project funding (No. DE-PI0000017). 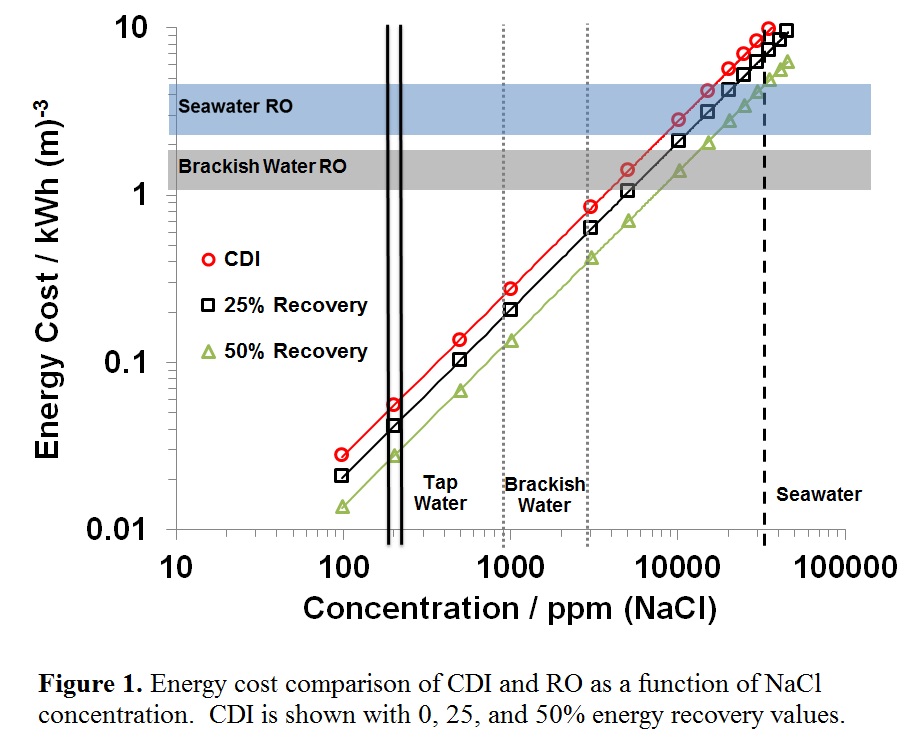