It has been well known that Mn(IV) oxides precipitate in the solution containing permanganate (MnO4–) and manganous ions (Mn2+), also known as the Guyard reaction.7  This reaction has been shown to be autocatalytic in acid solution as driven by the presence of colloidal Mn(VI) oxides.  This study also detailed the effects of the addition of Mn(NO3)2 or MnSO4 in the permanganate solution on the microstructure and growth of the conversion coating on the AZ31 magnesium alloy.

Figure 1 shows that the permanganate coated AZ31 displays a light brown color. As a result, the conversion coating has completely covered the AZ31 magnesium alloy after 60 s of immersion in the permanganate solution containing nitrate or sulfate anions.

Figure 2(a) and (b) show the cross-sectional TEM characterization of the AZ31 after 60 s immersion in the permanganate bath containing nitrate and sulfate anions, respectively. Both coatings have comparable thickness. Moreover, the SAED of the compact layer comprised diffused halos regardless of the bath composition, suggesting that all the coatings had poor crystallinity. The P content was the main difference between the two conversion coatings.

The nitrate-containing conversion coating effectively enhances the corrosion resistance of AZ31 magnesium alloys, as evaluated by EIS and potentiodynamic polarization measurements. The corrosion behaviors of the two coatings are also detailed using the EIS characterizations after different time periods of immersion in 3.5 wt.% NaCl solution. 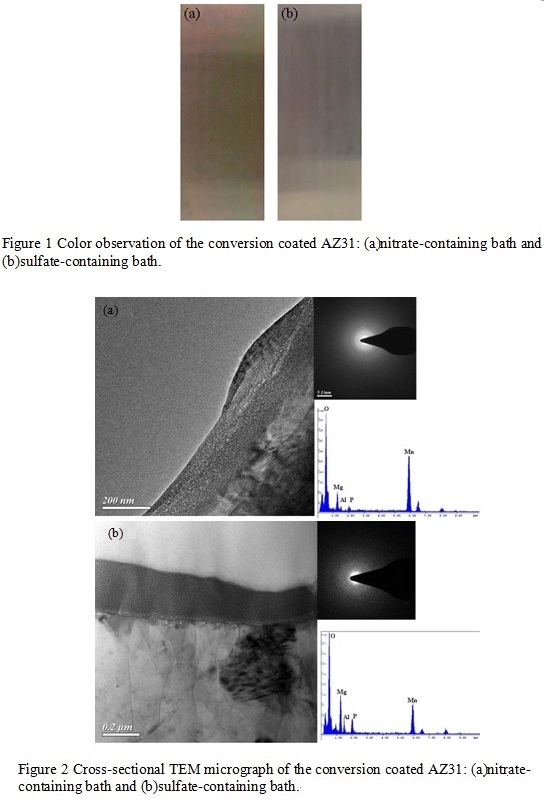