Tin / tin oxide in particular, forms a very attractive anode for both lithium and sodium ion battereries with a theoretical capacity of 847 mAh/g for Sn and 1378 mAh/g for SnO2 corresponding to the formation of Na15Sn4 phase [1-3]. However, SnO2 when used as anode for sodium shows a first cycle irreversible (FIR) loss of 52%  (giving a stable theoretical capacity of 667 mAh/g) corresponding to the reduction of SnO2 to Sn leading to the formation of sodium oxide matrix embedded with the Sn particles, similar to the phenomenon observed in Li – SnO2 system. However, similar to the Li-analog, Sn/SnO2as an anode undergoes colossal volumetric expansion (~430%) during the sodiation/de-sodiation process hence, leading to the mechanical disintegration and pulverization of the electrode when used in Na ion battery. It has previously been shown that nanostructures help minimize the stresses in the Li – Si system thus improving the stability and electrochemical performance of the anode material.

In the present work, SnO2 nanotubes have been synthesized using a sacrificial inorganic nanowire (INW) template. These INWs were dispersed in a solution of suitable tin precursors hence forming hollow SnO2 nanotubes (SONTs). The excess or remnant elements from the INW in the SONTs were removed by dispersing them in suitable liquid medium. In another method, tin(II) precursors were dissolved in suitable solvents and the pH of the solution accordingly adjusted to form nanoparticles of SnO. Slurry based electrodes of these hollow SnO2 nanostructures and SnO nanoparticles mixed with binder and conductive additives were tested in a half cell configuration against sodium metal, between the voltage range 0.01V – 1.2V vs. Na/Na+ in 1M NaClO4 (dissolved in EC:DEC =50:50)  as electrolyte. The same electrodes were also tested against lithium metal in 1M LiPF6(dissolved in EC:DEC:FEC=45:45:10) electrolyte to give a comparison of the material performance in both the systems.

The SEM (Fig. 1) image shows nanotubes of SnO2 formed by the precipitation of SnO2 from the stannate precursors and the simultaneous etching process of the inorganic wire template due to the release of respective counter ions. The EDS analysis shows the presence of Sn and oxygen without any signature from the elements in the INW template thus, confirming the dissolution of the template. The SEM image (Figure 2) of the synthesized SnO shows agglomerates of the spherical nanoparticles of SnO. The SnO2system when tested for lithium system shows a first cycle capacity of 1420 mAh/g (at 25mA/g), initial first cycle irreversible loss of 60% and a capacity of 632 mAh/g in the subsequent cycles.

Furthermore, the cycling data for the testing of these SONTs and SnO nanoparticles in sodium ion battery shall be presented with an analysis on the charge – discharge capacity, the first cycle irreversible loss, rate capability and long term stability of these nanostructures. 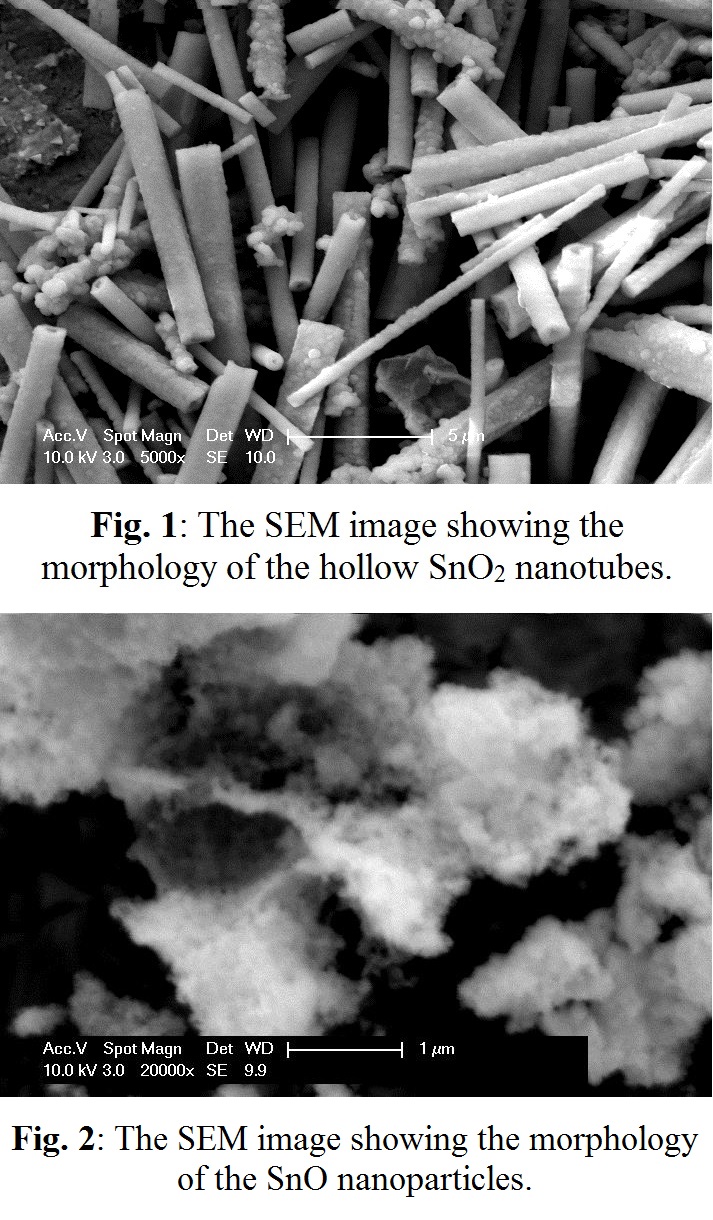