Our previous study on the composite electrode between mixed ionic and electronic conductor (MIEC) of LaNi0.6Fe0.4O3-δ (LNF) and ion-conducting oxide of Ce0.9Gd0.1O1.95(GDC) showed high electrochemical performance [1]. The lack of understanding on reaction mechanism makes the enhancement of composite electrode always connected to the enhancement of active region length of the electrode. However, for electrode which has quite high ionic conductivity such as LNF, another factor may enhance as well [2]. The surface oxygen exchange rate may enhance due to the hetero junction effect with GDC. To prove our hypothesis, LNF film electrode was prepared and GDC porous layer added on top of the surface of the film. In this study, the effect of the GDC was analyzed and discussed.

A LNF film electrode was prepared by pulse laser deposition method by Nd-YAG laser on the GDC electrolyte. Porous LNF as a counter electrode was deposited on the opposite side to the LNF film on the GDC electrolyte. The GDC porous layer was deposited into top of the film surface by screen printing method. The diameter of GDC porous layer was smaller than LNF film electrode. The samples were calcined at 1273 K for 6 hours. Electrochemical measurement was taken to compare two samples between LNF film and LNF film-GDC porous layer as a function of Temperature (973 – 1073 K) and oxygen partial pressure (10-3-1 bar). For the impedance set up, the alumina ring which was covered with Pt mesh was used as a current collector. The diameter of the alumina ring was larger compared to the GDC layer that the alumina ring didn’t touch GDC. In the analyses of the impedance responses, tentative equivalent circuits with two or three R-CPE elements (a resistance, R, and a constant phase element, CPE, connected in parallel) were used to identify their physical meanings.

Secondary ion mass spectrometry measurement (SIMS) was also performed to determine the surface oxygen exchange kinetics of the samples. The samples with LNF film and LNF film – GDC porous layer were cut into pieces of 3 mm x 3 mm. The samples were pre-annealed at 973 K under 10-1 bar for 3 hours and then quenched to room temperature. The isotope exchange was performed by flowing 16O2 at 973 K under 10-1 bar for 30 minutes before the gas abruptly changed into 18O2for 10 minutes. The quenched samples after the isotope exchange were used for SIMS measurement. For LNF film – GDC porous sample, the GDC porous layer was removed from LNF film prior to SIMS measurement. The isotope depth profile technique was used to determine the surface exchange kinetics for both of the samples.

From electrochemical impedance spectroscopy (EIS) result, the depressed semicircle of impedance spectra was observed for the LNF film and LNF film – GDC porous electrode. The low frequency arc was related to the electrode reaction on both of the samples for which the area specific conductivity was calculated. Fig. 1 shows the comparison of area specific conductivity (ASC) of LNF film and LNF film - GDC porous. The LNF film - GDC porous layer has higher ASC compared to the LNF film electrode. It shows that the activity of oxygen reduction process enhances due to the GDC existence on the top of LNF film surface.

Where the F, and Co are faraday number and oxygen concentration in the bulk sample. The n (between 2 to 4) is dependent on the reaction kinetics. Two measurements by EIS and SIMS proved that GDC on the surface of LNF film enhances the surface oxygen kinetics. Within the surface modification by porous GDC, the ASC enhances significantly. It may be due to the GDC on the LNF gives the oxygen vacancy at the interface between GDC and LNF film surface. The oxygen vacancy from GDC increases the rate of oxygen reduction reaction on the electrode surface. At the current result, the solid conclusion on the mechanism remains unclear. 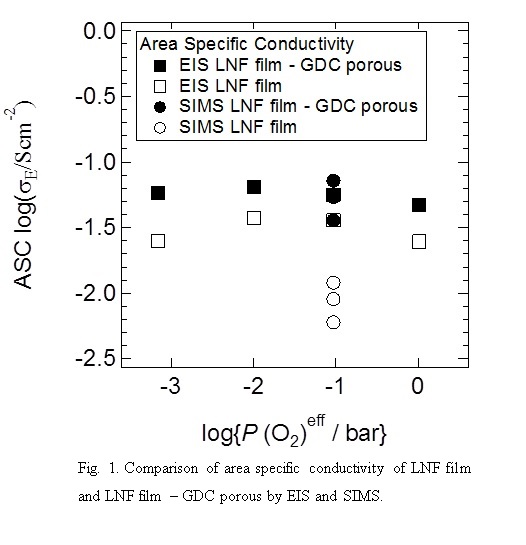