Continental Room A (Hilton Chicago)
N. Quill, C. Petchsingh, X. Gao, D. N. Buckley, and R. P. Lynch (Department of Physics & Energy, University of Limerick, Materials & Surface Science Institute, Ireland)
Vanadium redox flow batteries (VRFBs) are an attractive technology for a variety of energy storage applications.1,2  Monitoring of the state of charge (SoC) is important for any battery system.  Additionally, in VRFBs, transfer of vanadium ions across the membrane 3 and side reactions, such as hydrogen formation 4 at the negative electrode, can result in the SoC becoming unbalanced (e.g. more VV on the positive side than VIIon the negative).  Therefore independent monitoring of the SoC of both electrolytes is important for effective operation of VRFB technology.

The individual SoCs of the positive and negative sides of a VRFB may be monitored in a number of ways.  However, many of these methods have significant limitations; in particular they do not provide readings that are truly independent of the cell output. Spectroscopic monitoring of SoC is independent of electrochemistry and offers the possibility of performing in-situanalysis.

The positive electrolyte in a VRFB usually consists of VIV and VV in H2SO4.  The mole percentage of VV represents the SoC of the electrolyte. Since absorbance varies with percentage of VV in a very non-linear manner 5 SoC is not uniquely determined by an absorbance measurement at a single wavelength, as it is for the negative electrolyte. Empirical methods  6 that use look-up spectra have been proposed. However, we have shown 7-11that these elaborate methods are unnecessary since the spectroscopic behavior can be analyzed with considerable precision once the underlying solution chemistry is understood.

The procedures 7for determining SoC of positive electrolytes are not as straightforward as they are for negative electrolytes and involve measurements (and corresponding calibration curves) at two different wavelengths. In practice, both calibration curves will vary with electrolyte composition not only in the values of absorbance but also in the shape of the curves. Absorbance varies strongly both with total vanadium concentration and with sulfate concentration. Thus, for the positive electrolyte, a good quantitative understanding of the behavior of absorbance with electrolyte composition needs to be obtained before a suitable procedure for SoC measurement can be implemented.

Based on our earlier ex-situ results,7-11 we have extended our experiments to include in-situmonitoring of SoC by UV-visible spectroscopy as illustrated schematically in Fig. 1.   We will discuss our results with particular emphasis on the behavior of the positive electrolyte.

Fig. 1  Schematic of VRFB connected to an optical SoC monitor. The negative and positive SoC can be determined using the absorbance at one and two wavelengths, respectively. 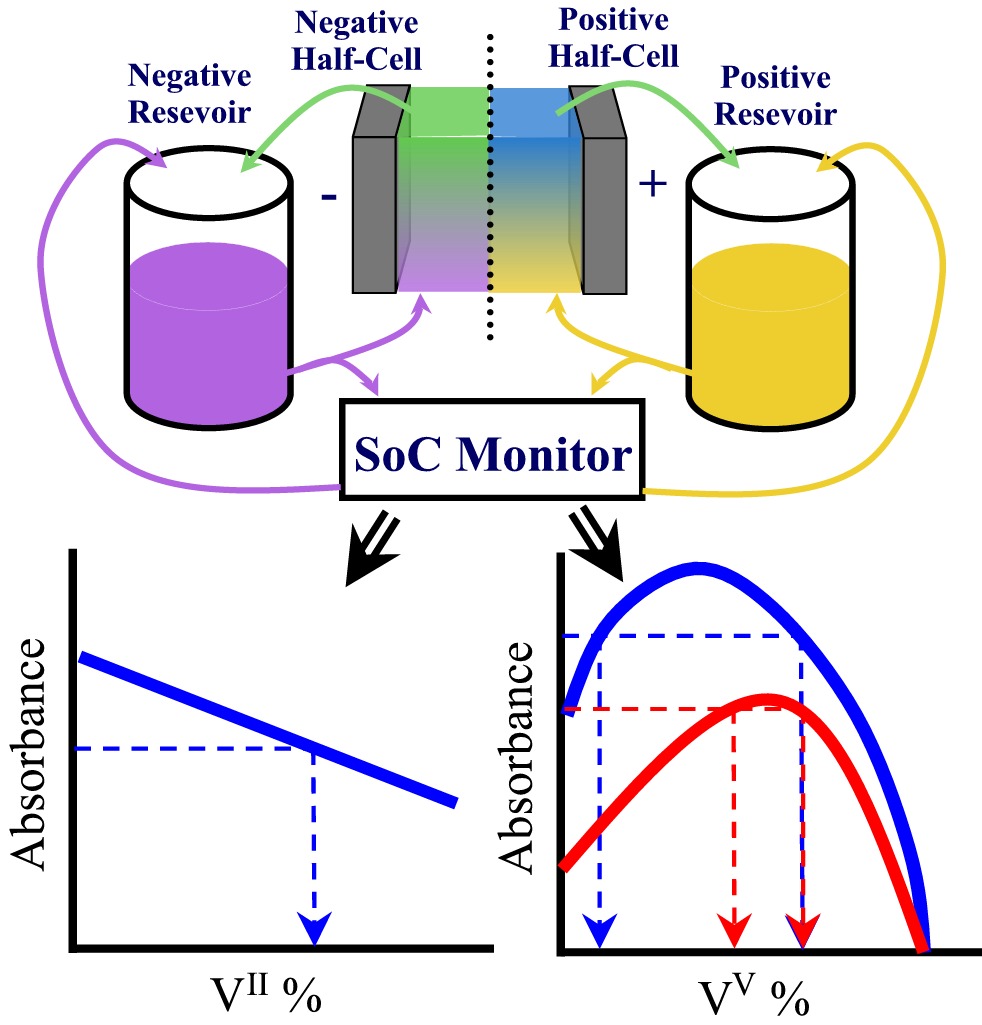