Salon C (Hilton Chicago)
R. H. Brugge and A. Aguadero (Imperial College London)
Lithium-rich garnets such as Li7La3Zr2O12  (LLZO) show promise as solid state lithium ion conductors for use in high energy density storage applications due to their chemical and thermal stability and electrochemical performance versus current technology electrolytes. Much work has focused on improving the conductivity of these systems by maximizing the lithium content but also through the introduction of lattice vacancies created by the addition of cation dopants (such as Ga1) in the Li sites. Additionally, the importance of stabilizing the cubic garnet phase as opposed to the less conducting tetragonal polymorph has been acknowledged and pursued in the search for high conductivities2.

There is uncertainty with regard to the specific Li ion conduction mechanism in these systems however it is widely agreed that the Li ions in LLZO adopt tetrahedral (Td) and octahedral (Oh) positions in the lattice and that the conduction pathway is by a face-sharing network of these sites3, 4. It is yet unclear if the Li ions move from one Oh site to another via a neighbouring Td site (Oh-Td-Oh path), or whether they hop directly across Oh sites, bypassing the Td site (Oh-Oh path), and how this pathway is influenced by the lattice site occupancy of Li and dopants. The sensitivity to air and moisture during synthesis5as well as phase transformations of the garnet structure further complicate the picture.

In this study, we determine the exact nature of the effect of dopants on the conductivity by investigating the dopant species Zn(II), Ga(III) and Ge(IV). An understanding of the lattice position adopted by these cations as determined by their size and/or charge will be achieved through analysis of the synthesized samples by neutron diffraction and solid state NMR. By tracking the dopant ion position, the corresponding Li conduction pathway can be found and related to that required for optimum conductivity. We also find the critical Li ion to vacancy ratio for optimum ionic conduction, by varying the stoichiometry of each dopant of a particular oxidation number and measuring the resultant electrolyte ionic conductivity using an AC impedance technique.

Lattice strain effects will be a final consideration- how does the size of the dopant ion restrict or enhance the diffusion pathway of the Li ions, and is there a blocking effect seen above certain dopant concentrations? Control of the atmospheric conditions is achieved throughout by the use of an Argon-supplied glovebox coupled with a furnace (1600°C), preventing exchange of Li with H+during synthesis and processing. This has proven to improve the densification of the electrolyte and increase the Li-conductivity by between 1 and 3 orders of magnitude.

Figure 1. a)  Arrangement of polyhedra in the garnet Ga-doped LLZO cubic structure and b) Possible Li-pathways in the Td-Oh network.1 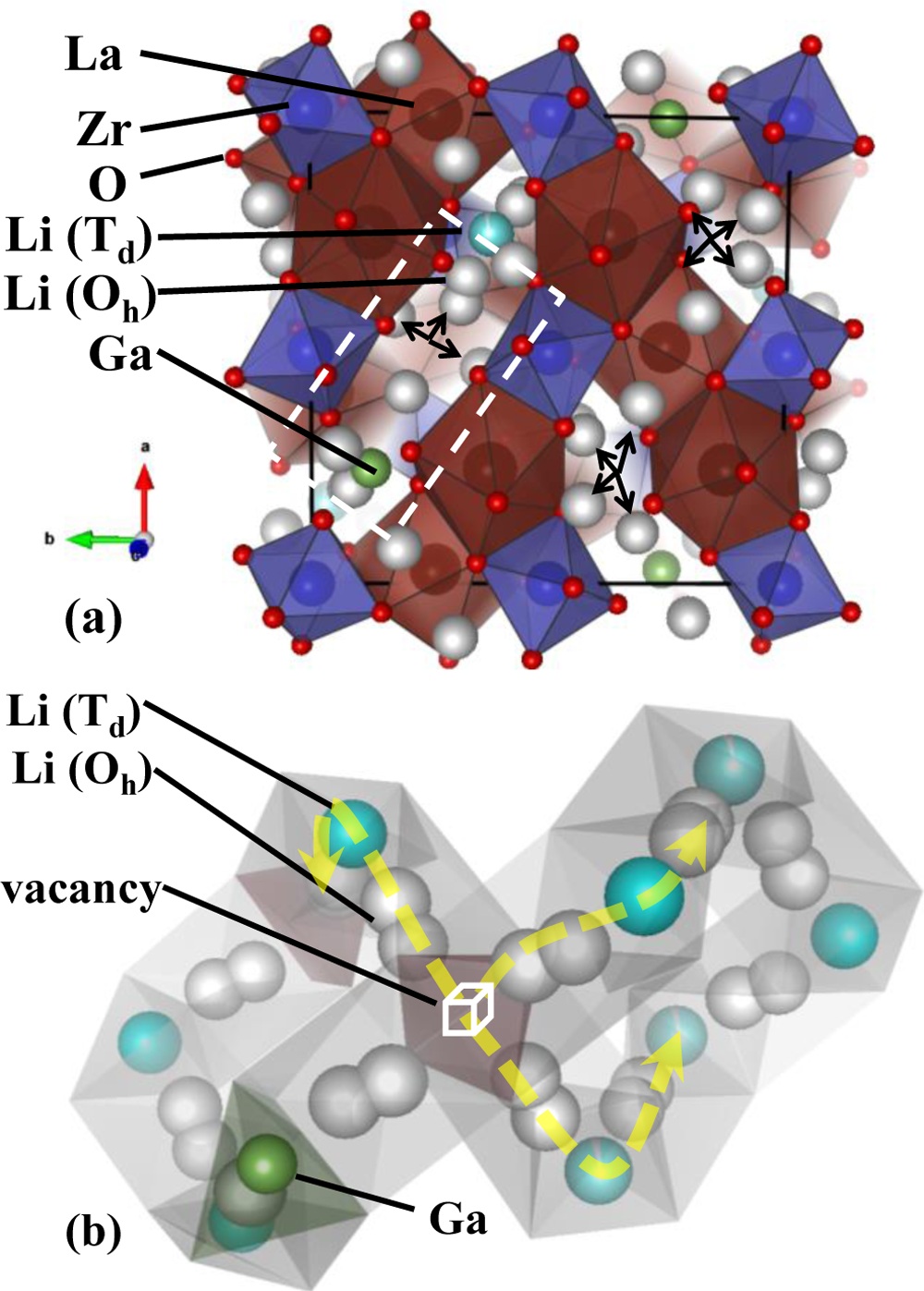