PDR 4 (Hilton Chicago)
G. R. Stafford, M. R. Fayette, and M. D. Vaudin (National Institute of Standards and Technology)
Electrodeposition is commonly used in electronic packaging, magnetic recording, and copper interconnections in printed circuit boards and integrated circuits. The evolution of residual stress during thin film growth is complex, depending on the microstructure, growth conditions, and material parameters. However, based on a large number of studies, a general understanding of the origins and mechanisms of residual stress is beginning to emerge.1 During film deposition, stress is small in the early stages, becoming tensile during the coalescence of nuclei into a continuous film. However, as films become thicker and the height becomes more uniform, the stress often reaches a constant steady-state value. Models have been developed that treat this steady state stress as a dynamic competition between tensile and compressive stress generation mechanisms that are largely governed by atomic mobility, microstructure, and deposition rate.1As a consequence, one can expect that the solution additives and alloying elements needed to achieve desired deposition rates and mechanical properties will contribute significantly to this stress development.

In this study, the stress was measured with optical wafer curvature techniques that can be used during deposition to determine the real-time stress evolution.2 The measured curvature is proportional to the product of the average biaxial stress and the film thickness according to the Stoney equation. We refer to this quantity as the stress-thickness product. Figure 1 shows typical stress-thickness curves for Cu electrodeposited onto a Au-coated cantilever electrode from additive free 0.24 mol/L CuSO4 in 1.8 mol/L H2SO4. The reference electrode was saturated mercury - mercurous sulfate. In all cases the stress-thickness was tensile (i.e. > 0) and reached a constant slope after about 200 nm of Cu was deposited. If it can be assumed that the stress in previously deposited Cu does not relax during deposition, then the slope along any point of these curves corresponds to the incremental or instantaneous stress; i.e., the in-plane stress of new Cu being deposited at the surface. We will refer to the linear region where the incremental stress is constant as the steady-state stress (σss). If we evaluate the slope in the thickness range of 250 nm to 300 nm, the steady state stress values range from 13 MPa to 116 MPa and increase as the deposition potential is made more negative. This is consistent with current stress generating models that predict increasingly tensile growth stress as the growth rate is increased.1Figure 1 also shows the stress-thickness for a 3-minute period following deposition where the Cu deposit is allowed to rest at the open-circuit potential. Little stress relaxation is observed at low to moderate overpotentials whereas relaxation of tensile stress is seen for large overpotentials. Although the relaxation of tensile stress is not extensively discussed in the literature, it is generally attributed to the reduction of coalescence-induced strain energy by surface diffusion.

Figure 2 shows typical stress-thickness curves for Cu electrodeposited from the same 0.24 mol/L CuSO4 in 1.8 mol/L H2SO4electrolyte, but with the addition of 1 mmol/L NaCl and 88 mmol/L polyethylene glycol (PEG). The stress response is significantly altered from the additive-free case. For the same deposit thickness, the steady-state stress varies from -68 MPa at low overpotential to +55 MPa at more negative deposition potential. In addition, there is significant relaxation of compressive stress for the low-overpotential deposits following deposition at open circuit. Since compressive stress is generally attributed to the diffusion of atoms into grain boundaries as the film thickens, the addition of PEG-Cl has either reduced the coalescence-induced tensile stress or enhanced the generation of compressive stress by facilitating the mobility of Cu into and out of the grain boundary. This talk will examine the influence of organic additives on stress development, in the context of deposit microstructure and stress generating mechanisms that appear in the literature. 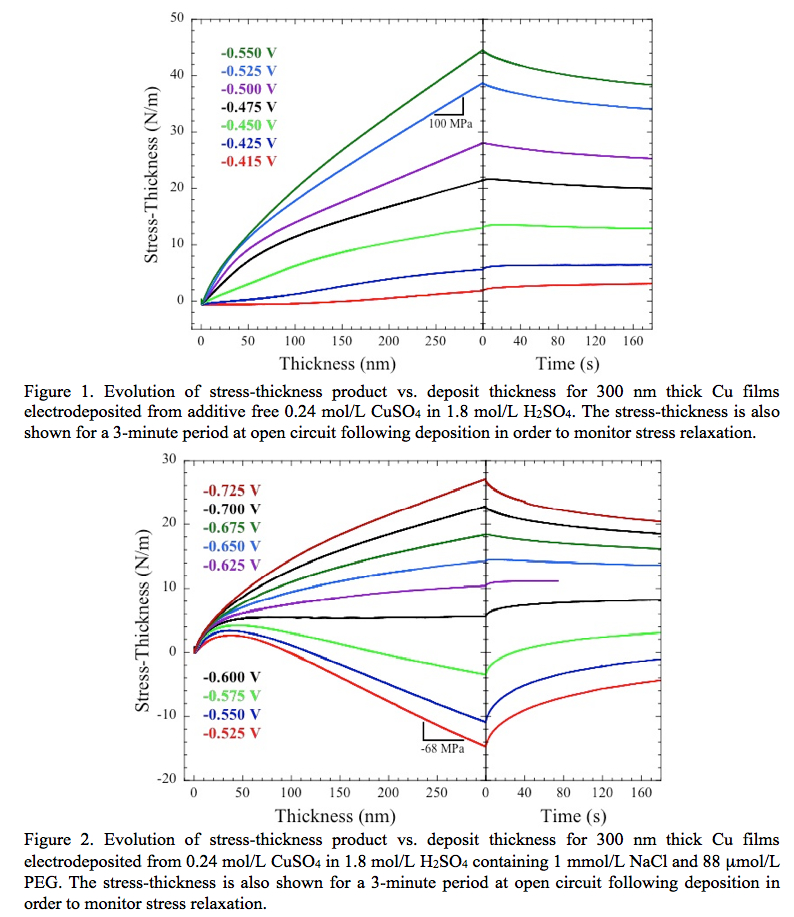