However, the large-scale production of Si/CMC/C composite electrode is troublesome since it generally leads to a large H2 bubbling within the slurry, later making impossible the fabrication of uniform electrodes. This results from the oxidation of Si by water (Si + 2H2O à SiO2 + 2H2), and we will here show how we mastered and finally avoided this reaction through partial and controlled oxidation of Si by pre-reaction with either water (Siwater) or air at moderated temperatures (Siair).

By coupling volumetric, chemical, XRD, TEM/EELS, TGA/DSC, IR and gas adsorption data, the texture and chemistry of the resulting silica-based coating layers were found to be highly dependent on the oxidation path (Figure 1), while the level of oxidation is tuned by the time-temperature of the treatment. Although fully oxidized samples are totally inactive vs. Li., a mild oxidation (e.g. 10-15wt% SiO2) protects the Si core from water during the electrode processing, while ensuring very stable capacity upon extended cycling (Figure 2).

The electrochemical properties of the various resulting oxidized materials will be here deeply discussed. In addition, we will describe the effects of 1) alternative salts (LiPF6 and LiTDI), 2) various additives (FEC and VC), and 3) different procedures for the electrode making (e.g. powder mixing, drying conditions) onto the reaction of these Si/SiO2composite materials with Li. 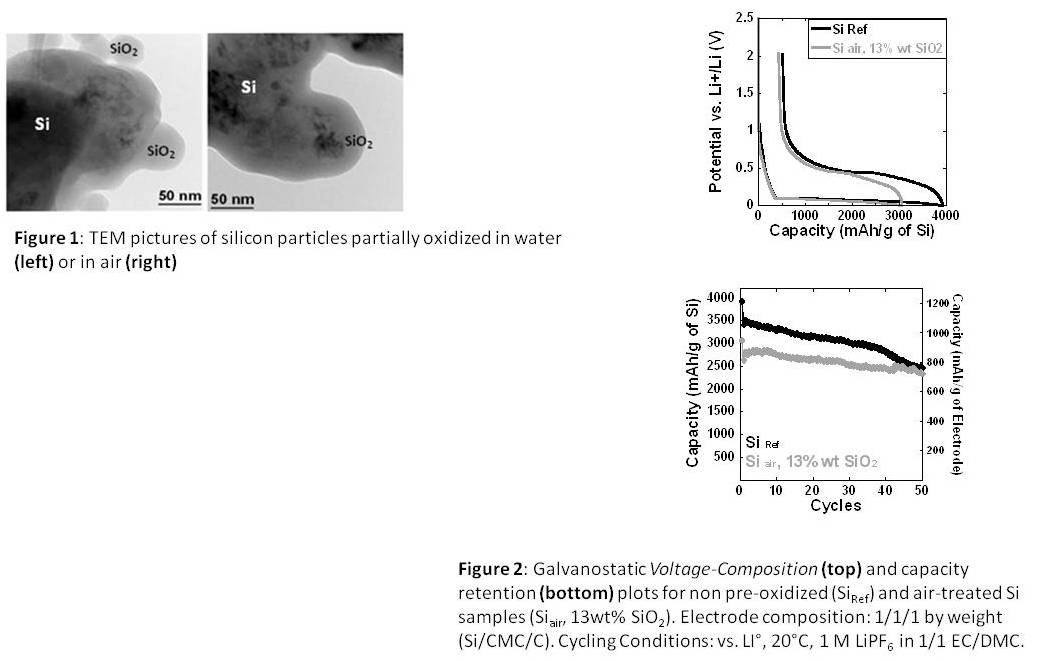