Mixed Ionic Electronic Conducting (MIEC) materials are used in Solid Oxide Fuel Cells (SOFCs), gas sensors, gas separation membranes, etc. [1] One common MIEC material is La1-xSrxFeO3-δ (LSF), where x is the fraction of Sr occupying the ABO3 perovskite A-site and δ is the oxygen nonstoichiometry. Doping with mixed multivalent A-site cations or varying the La to Sr concentration ratio can change the oxygen nonstoichiometry, which in turn controls the functionality of LSF in these applications. [2] When x is varied from 1 to 0, LSF changes from cubic SrFeO3-δ (SFO) to rhombohedral La0.5Sr0.5FeO3-δ(LSF55) to orthorhombic LaFeO3-δ(LFO). [3]

While the ultimate goal for many applications is to computationally identify the La to Sr concentration ratio with the optimum oxygen surface exchange rate, the present study focuses on predicting the La1-xSrxFeO3-δ (LSF) oxygen nonstoichiometry under SOFC operating conditions using density functional theory (DFT)-based defect thermodynamics calculations. All calculations were performed using spin-polarized DFT with a GGA+U functional. The U parameters on Fe were carefully chosen to capture the Fe oxidation state, the Fe magnetic moment, and the phase stability as xwas varied from 1 to 0.

The Magnetic Moment on Fe:

The formal oxidation state on iron is considered to be +4 in SrFeO3, +3 in LaFeO3, and a +3/+4 mixture in LSF that varies as x varies. However in the simulations performed here, a typical Bader charge analysis of the electron density distribution was unable to predict the Fe oxidation state in these structures. Hence, as has been done in experiments, Fe magnetic moment calculations were used to determine the Fe oxidation state. Here, a single U-parameter was used for all LSF structures with different x to compare the magnetic moments of Fe in them. The Fe magnetic moment in all three minimized structures (SrFeO3, LaFeO3, and La0.5Sr0.5FeO3) were computed with different Ueff parameters to select a suitable value for Ueff. It was found that Ueff =3 best predicted the Fe magnetic moment as x was varied in LSF. The calculated 0 K magnetic moments for Fe were 3.61 μB for SFO, 3.94 μB for LSF55 and 4.23 μB for LFO. These values are in good agreement with earlier experimental measurements. It is evident from the calculations that for defect free structures, the magnetic moment of Fe linearly varies from 3.61 μB to 4.23 μB as the 3+ to 4+ oxidation state varies as xin LSF changes from 1 to 0.

Since intermediate temperature SOFCs operate at 600-800oC,  [6] a thermodynamic correction was added to the DFT+U predicted oxygen formation energy. The vacancy formation energy was calculated as a function of the chemical potential of oxygen, µO(T,p), at SOFC operating condition (equations are provided). In these calculations EO2DFT was the DFT calculated free energy for oxygen. δG0O2 was the connection energy between 0 K and room temperature (T0), p0 was the atmospheric partial pressure of oxygen. T was the SOFC operating temperature and p was the operating pressure. Based on the oxygen vacancy formation energy, its concentration was predicted as a function of the chemical potential of O2 as well. 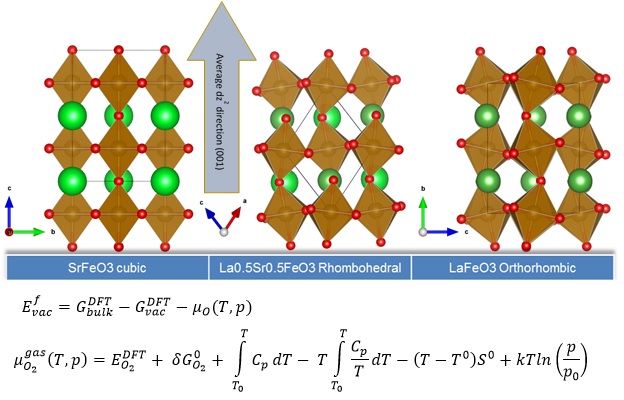