Lake Ontario (Hilton Chicago)
Z. F. Li and J. Xie (Indiana University-Purdue University Indianapolis)
Due to the power requirements for electric vehicles, tremendous work has been devoted to energy storage devices with high power density, energy density, and rate performance. Electrochemical supercapacitors are very attractive because of their better cycling performance and higher power density as compared to Lithium-ion batteries.1 Carbon materials have been considered as promising materials as supercapacitors due to their high surface area, excellent electrical conductivity, and good stability.2 The double-layer capacitance of a carbon supercapacitor is proportional to the surface area of its electrode material accessible by the electrolyte ions.3 However, commercial supercapacitors based on activated carbon electrodes only deliver an specific capacitance of about 100 F/g, which is significantly lower than that of Li-ion batteries.4 Therefore, preparing materials with high surface area and suitable pore size distribution is very critical in achieve high-performance supercapacitors. Recently, graphene, a two-dimensional single-atom-thick layer of sp2-bonded carbon, has drawn much attention due to its exotic properties, such as high surface area, electric conductivity, and mechanical strength.5 These properties make graphene a very promising candidate for supercapacitor application.6 However, due to the strong van de Waals force between neighboring layers, graphene sheets are inclined to restack into aggregates a few layers thick, resulting in a large decrease in the surface area. Here, we report facile fabrication of covalently-functionalized graphene as supercapacitor electrodes. One example is covalently-grafted polyaniline on graphene oxide, and the other example is phenylbenzimidazole-functionalized graphene. 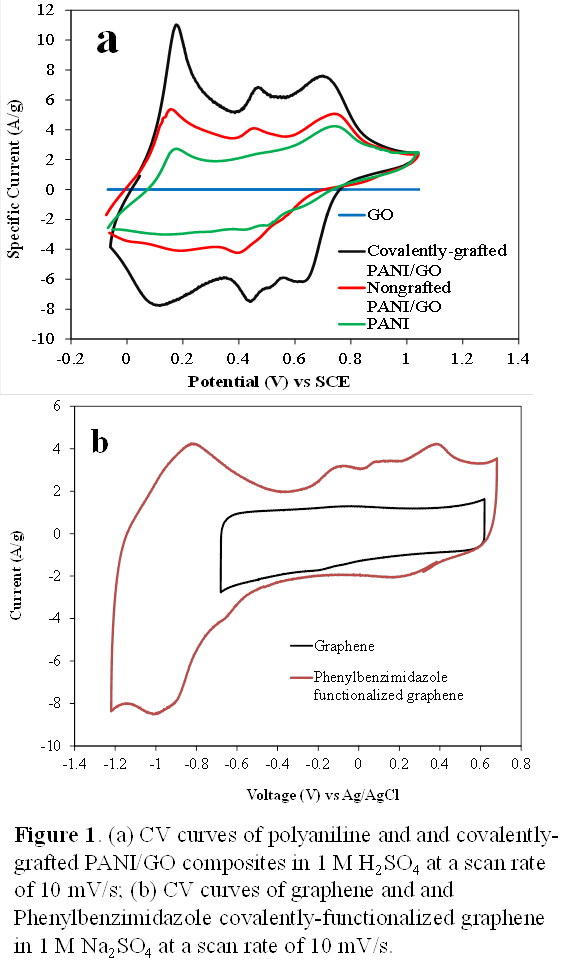