1290
The Comprehension of the Interfacial Chemistry during Etching Process onto SC: A Way to Understand the Mechanism

Conference Room 4F (Hilton Chicago)
T. Vayron (Institut Lavoisier de Versailles), A. Causier (Université de Versailles), M. Bouttemy, I. Gérard, D. Aureau, J. Vigneron (Institut Lavoisier de Versailles), and A. Etcheberry (Institut Lavoisier de Versailles, UVSQ)
The understanding of the charge transfer at SC Electrolyte interfaces is one of the fundamentals of semiconductor electrochemistry. A lot of examples in literature show that this interfacial process can be governed by the presence of interfacial films. So it is interesting to explore how chemical interface modifications, modulate the chemical and electrochemical behavior of the SC electrodes and more interesting how its knowledge helps to its diagnostic. In this topic a very attractive SC to study this kind of phenomenon is InP. Indeed, among the semiconductors studied for their interfacial electrochemical behaviors, InP is probably one of the more interesting. This is due to its very particular anodic or cathodic responses that are governed partly by the pH of the solution. Very different surface chemistry are reachable which set the nature of the chemical status of the interface whose the surface oxide stability are probably the more important parameter for setting the charge transfer as the energy diagram of the liquid junction. A very interesting case is when oxidizing species are present in solution. It is interesting to relate the electrochemical responses of the interface (current vs potential or capacitance vs potential) to the interfacial chemistry of the interface undergoing an electrochemical transfer which is generally related to an etching process, an oxide growth or a passivation phenomenon [1]. Moreover on the same system it is opportune to dispose of accurate information about the chemical stability or instability of the interface which can be under a dissolution or a passivation regime. This regime can be discriminated by detection of anions or cations species coming from the sample interaction with the solution containing the oxidizing species. The more difficult information, to extract is the nature of the chemical transformation induced in situ during the interaction. Depending in its nature and its stability toward emerging from solution external chemical analysis can be provided as for example by XPS. All these general considerations can be attentively discussed on reference system as for example on InP/HBr:Br2 aqueous solutions system for which the etching properties of acidic bromide solutions have been investigated [2] indicating a strong impact of HBr concentration on etching process as on the related interface chemistry which governs the rate. In this contribution we add to the experimental procedure, electrochemical measurement performed on n-type or p-types samples as tool for investigating the interface evolution as for the modulation of the etching rate. As example are given in figure 1 the I(V) responses of an p-InP electrode submitted to the solution interaction. In the case of p-type there are no reduction current in the dark associated to Br2 reduction but this reduction current appears as soon as the surface is illuminated. In the dark the etching rate is important, constant whatever the polarization, governed by the rotation speed of the sample. Under illumination the etching rate decays as the photoréduction of Br2increases. At a given rotation speed for a sufficient incident flux the photocurrent saturates and at the same time the etching rate vanishes as shown in the fig1. A very different observation is obtained for n-type for which a spontaneous reduction is observed with also a typical modulation of the etching rate which depends on the éelctrode polarization. These opposite behaviors have been previously observed on GaAs for n&p type and have given rise to the well known “Unified Model” for describing on III-V the etching mechanisms induced by hydrogen peroxide or halogen in solution. It is clear that the combined study: species dosages in solution, electrochemical modulation, XPS of resulting surface performed for this work open opportunities to discuss this model and introduce possible electrochemical anodic step which have been neglected on the basis of the GaAs data. The origin of the proposed discussion is related to the observation performed ex situ by XPS which agrees with an anodic oxidation step until no mentioned.

All this results demonstrate the strong correlation between the nature of the interfacial chemistry and the resulting electrochemical behaviors. This main point will be the purpose of our contribution. 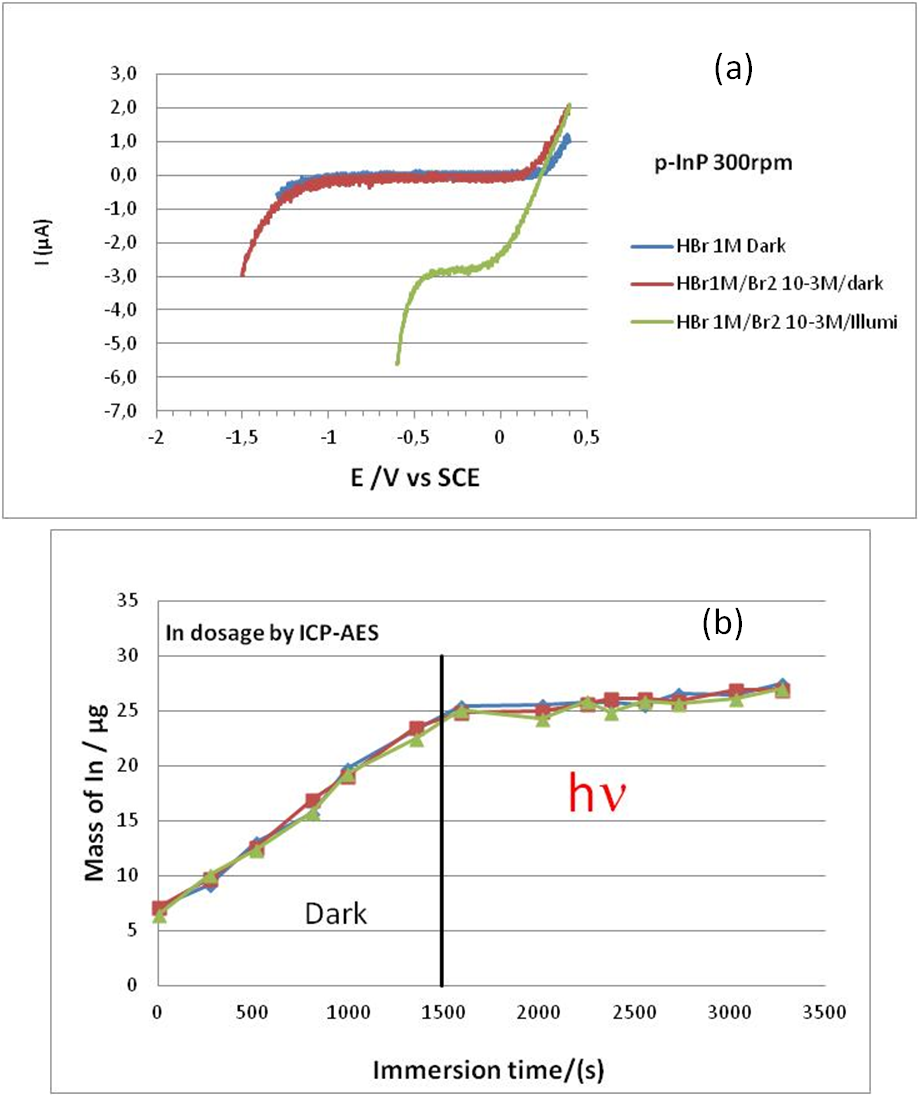