Salon C (Hilton Chicago)
L. V. Mogni (CONICET-CNEA), K. Yakal-Kremski (Northwestern University), C. M. Chanquía (CNEA-CONICET), Z. Gao, H. Wang (Northwestern University), A. Caneiro (CONICET-Centro Atómico Bariloche-CNEA, Argentina), and S. A. Barnett (Northwestern University)
The strontium-lanthanum cobalt-rich perovskites are the most extensively studied mixed conductor SOFC cathode materials[1-3]. Recently, different methods have been developed to improve their microstructure and to make them suitable for use as electrodes in Intermediate Temperature Solid Oxide Fuel Cells (IT-SOFC) [1, 3-5]. It is well known that reducing particle size leads to an increase in surface area, thereby reducing the electrode polarization resistance. However, the elevated temperatures typical of SOFC operation can cause particles coarsening, a dominant contribution to long-term degradation for nanomaterials [6, 7]. Another cause of degradation is Sr-segregation on the surface of these perovskites, which blocks the O-surface exchange sites [8, 9] and decreases the effective surface.

In this work we present the study of the cell performance and long-term stability of a nanoscaled La0.4Sr0.6Co0.8Fe0.2O3-δ cathode obtained by the combustion method (LSCF4682) at 800˚C. Details about the synthesis method, the microstructure and the mechanism of oxygen reduction reaction for this cathode has been previously reported in [4]. The unique microstructure achieved by this method, which exhibits a high surface area, good interconnectivity of grains and a high volume fraction of mesopores induces a change of mechanism controlling the O-surface rate. Below 600 °C, the mechanism of reaction is dominated by the O-surface and transport rates, whereas as T increases the mass transfer due to the O2gas diffusion becomes important [4].

SOFC tests were performed on single cells of anode–electrolyte–cathode systems. The samples were constructed from a porous (Sr0.8La0.2TiO3-α) STO‑LSGM supported multilayer cell [10]. The anode consists of a Ni infiltrated porous LSGM separated from the cathode side by a thin dense LSGM electrolyte. The cathode was prepared as a bilayer electrode consisting of a thin LSGM porous interlayer and a thicker LSCF4682-LSGM 50% composite. Figure 1a shows post mortemSEM images of the tested cell, and Figures 1 b and c show the cathode and anode microstructures.

Figure 2 shows I-V and I-P curves collected between 500 and 650 °C. A maximum power density of 1.23 Wcm-2was achieved at 650 °C suggesting that this is a competitive IT-SOFC assembly. Above 600 °C the gas mass transfer controls the power density at high current density in agreement with the oxygen reduction mechanisms previously proposed [4].

The time-dependent evolution of cathode polarization resistance for this material deposited in symmetrical LSCF/LSGM/LSCF cell was studies by Electrochemical Impedance Spectroscopy (EIS) and compared with that of a commercial La0.6Sr0.4Co0.2Fe0.8O3-δ cathode (Praxair LSCF6428). In order to reduce the time for data acquisition, an accelerated aging test was performed, where ageing would take place at 800 °C, with brief reduction in temperature to 700 °C for EIS collection. Figure 3a shows the initial and 500 h EIS spectra of cells manufactured with either, the commercial LSCF6428 and the LSCF4682 synthetized by us. Despite that the degradation rate of both cathodes are similar, the low LSCF4682 polarization resistance guarantees a competitive IT-SOFC cathode during longer-term operation. Figure 3b indicates that the time evolution of total cathode polarization resistance (Rtot)  is due to both contributions by O-surface exchange and O2gas diffusion suggesting a microstructural change with time.

Figure 2. Voltage and power density versus current density measured between 200 sccm air  and 100 sccm humidified H2 as a function of temperature.

Figure 3. a) Comparison between EIS spectra taken at 700 °C at the beginning and after 500 h of the 800 ˚C aging test. b) Resistance evolution with time for High (RHF) and Low (RLF) frequency contribution to Total cathode polarization resistance (Rtot). 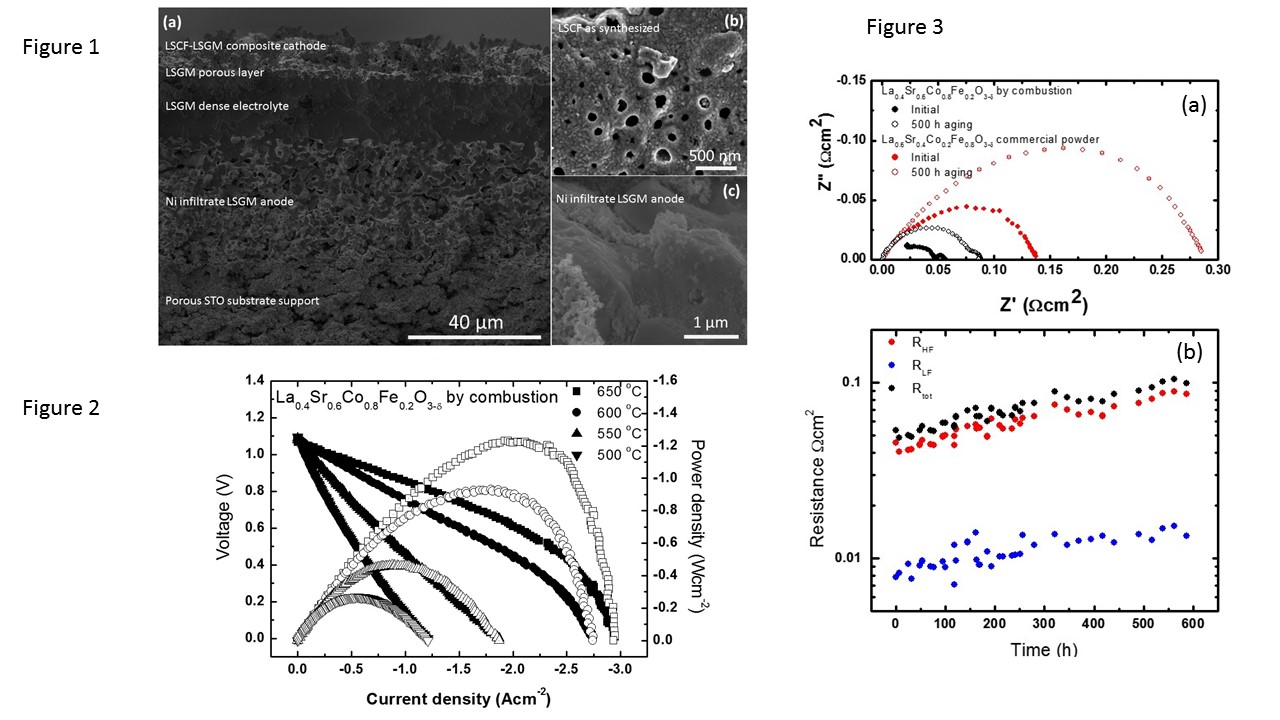