Salon A-2 (Hilton Chicago)
M. Farkhondeh, M. Pritzker, M. Fowler, M. Safari (University of Waterloo), and C. Delacourt (Université de Picardie Jules Verne)
The memory effect in Li-ion batteries first observed by Sasaki and co-workers1 in a LiFePO4electrode is defined as an abnormal potential overshoot in the charge–discharge cycle immediately following a partial charge–discharge cycle. This phenomenon is observed when the electrode undergoes 3 sequential cycles: i) memory-writing cycle where the electrode is first charged to a certain state-of-charge (SOC), then allowed to rest before being discharged to a given SOC, ii) memory-release cycle consisting of a full charge–discharge cycle which follows a rest step after memory writing and iii) a regular cycle which is simply a repetition of the memory-release cycle as a control test. A potential bump appears during the memory-release cycle which coincides with and tracks the depth of the memory-writing cycle (Fig. 1).

A mathematical model has been developed2 to describe the dynamics of a phase-separating electrode (e.g., LiFePO4) and relies on two main features: i) non-equilibrium single-phase lithiation/delithiation of elementary units making up the active material and ii) non-uniformity of at least one physical property among the elementary units or across the electrode. An elementary unit may be interpreted as a single Li channel lying along the b-axis, a crystallite within a polycrystalline particle or even a nanoparticle in a nanoparticulate porous electrode. This mesoscopic unit is the smallest entity that can exchange species with its counterparts across the electrode.

Model simulations reveal that the necessary condition for the memory effect to occur is the existence of a non-zero residual capacity at the onset of the memory-release charge which may originate either from a non-zero initial SOC or from an imbalanced writing cycle (unequal initial and final SOC). More importantly, it is shown that the collective electrochemical lithiation/delithiation of units in an electrode leaves it in a condition which is at the heart of the memory effect and other unusual observations in phase-separating electrodes (e.g., LiFePO4). Such unusual behavior is of critical importance in designing battery management algorithms which inevitably rely on cell voltage in addition to coulomb counting for SOC estimation.

In this presentation, we shed light on the lithiation/delithation dynamics of LiFePO4 electrodes through a simple mathematical mesoscopic model. This model can simultaneously explain several other unique observed features associated with LiFePO4electrochemical performance:

To the best of our knowledge, this is the first successful description of the electrode response to multiple operating modes including continuous/intermittent partial/full galvanostatic and potentiostatic cycles that predicts the above features (Fig. 1).

Figure 1: (a) Memory effect simulated for a 30% deep memory-writing cycle followed by a 10 min rest and memory-release cycles carried out at a rate of C/2. (b) Simulated open-circuit potential of the electrode undergoing different charge-discharge paths. 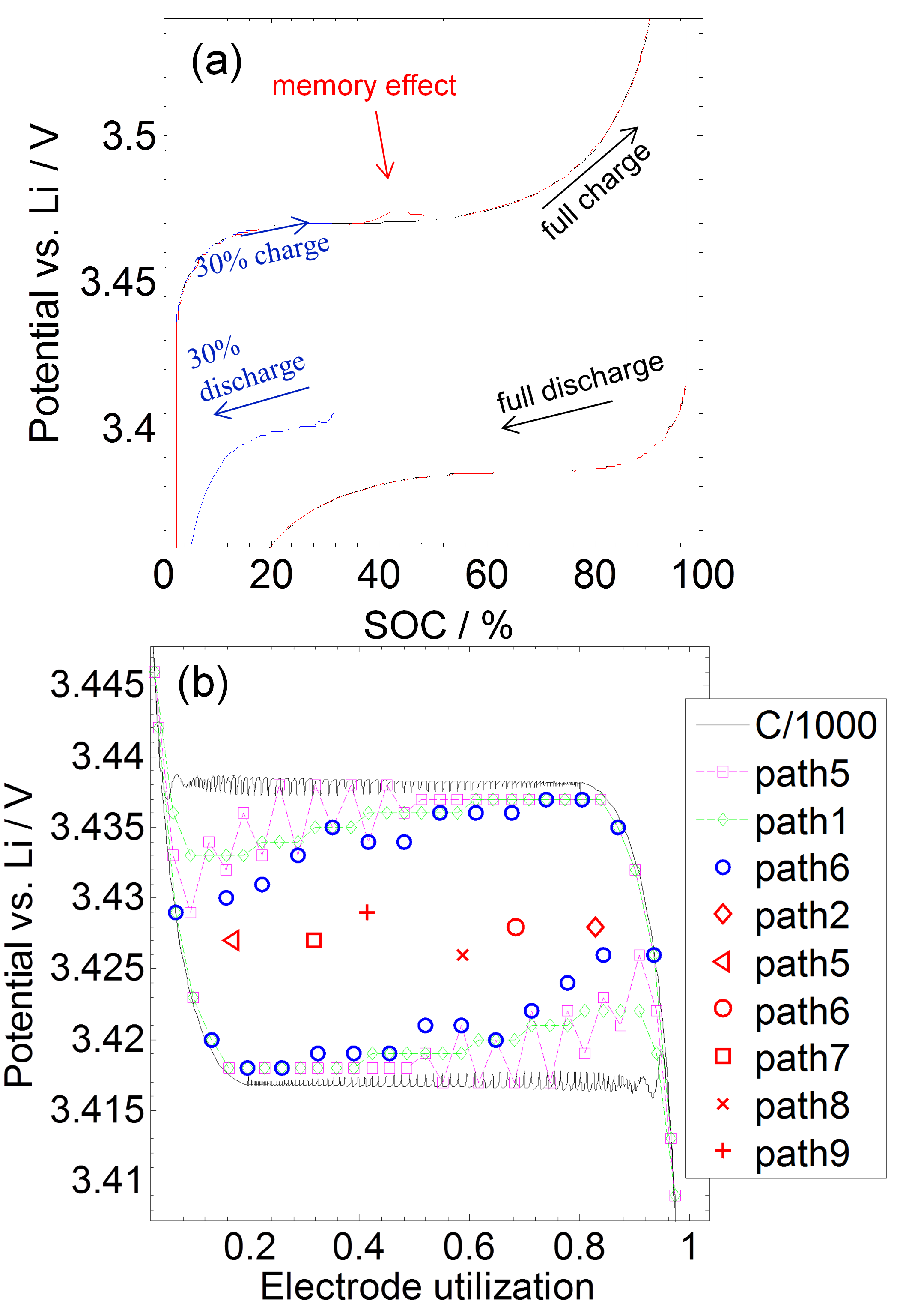