STEP uses thermal energy to heat reactants to high temperatures to drive endothermic reactions. This decreases the thermodynamic energy and improve the kinetics of a wide range of chemical processes. In particular, solar thermal provides an efficient heat source, and efficiently utilizes the full spectrum of sunlight (whereas solar cells are limited to sub-bandgap sunlight). Useful staples are formed electrochemically, rather than chemically, at low energy (at low electrolysis voltage). STEP processes include STEP carbon for direct removal of atmospheric or smokestack carbon dioxide, and the portfolio of demonstrated STEP products include fuels, iron, graphite, organic syntheses, waste water treatment, bleach and most recently ammonia.1-9

In industry today, lime is produced by calcination. During calcination, CaCO3 is heated to temperatures in excess of 850ºC to decompose it into CaO and CO2. The STEP pathway uses a molten carbonate electrolyte to electrochemically convert calcium carbonate. Whereas the calcium carbonate reactant is highly soluble in alkali carbonates, we have found that the desired product, calcium oxide is not. In the STEP molten salt electrolyer, dissolved CaCO3 is converted into CaO, O2 gas, and a solid carbon product, as shown in Eq. 1. 9

As calcium carbonate is depleted from the mixture, additional limestone can be added to the electrolyzer to continue the process. With proper heat exchangers, the heat loss from the products removal can be used to preheat the added calcium carbonate, improving energy efficiency of the process.

To probe the mechanism of electrolytic lime formation and optimize the STEP cement process, a method of analysis is presented here to precisely distinguish between calcium carbonate and calcium oxide. Characterization is performed by x-ray diffraction with a quantification of the layer by Fourier Transform Infrared spectroscopy along with supplemental SEM and elemental analyses. The system is optimized in regards to calcium oxide purity and yield, along with coulombic efficiency, energy efficiency, and process stability. Various temperatures, current densities, and electrolyte compositions were explored to determine the effect on the deposition layer. With high purity calcium oxide production possible, STEP cement allows for a CO2free pathway towards a greener cement. 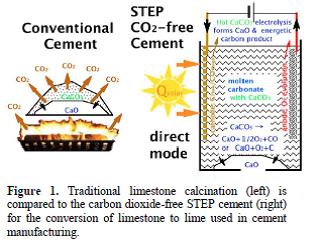