Continental Room B (Hilton Chicago)
A. M. Bizeray, S. R. Duncan, and D. A. Howey (University of Oxford, Department of Engineering Science)
We discuss the estimation of lithium-ion battery states using an extended Kalman filter based on the Doyle, Fuller and Newman pseudo two-dimensional (P2D) electrochemical model [1]. The P2D model is solved using our computationally efficient Matlab implementation [2] that uses Chebyshev orthogonal collocation. In order to predict the cell capacity and power fade, the P2D model is coupled to a bulk thermal model and a degradation model describing the formation of the solid-electrolyte interphase (SEI) [3]. This state estimation algorithm could be used online for advanced battery management systems (BMS) for electric vehicles and other applications.

BMSs are embedded systems that monitor and control individual cells of a battery pack to ensure safe and optimal energy use. The estimation of battery states such as state-of-charge (SOC), state-of-health (SOH) and instantaneous power capability is an important function fulfilled by the BMS, requiring measurements of current, voltage and temperature combined with an accurate battery model. Current approaches usually employ low-order equivalent circuit models (ECMs) due to their low computational requirements. However, these are only accurate within a narrow operating range, and accounting for changes in dynamics and performance caused by degradation is difficult due to the lack of physical meaning of model parameters.

Battery models such as the P2D model [1] are based on equations of conservation and are accurate over a wider operating range accounting for various effects, including temperature and degradation. However, these are usually too computationally intense for embedded applications. Instead, we focus on efficient numerical methods called spectral methods that have been recently applied by us and others to the P2D model to reduce the computational burden while maintaining accuracy [2, 4, 5]. We have also recently demonstrated this method applied to super-capacitor modeling [6]. We have implemented an efficient solution of the P2D model coupled to a bulk thermal model, with temperature- and concentration-dependent parameters, using the orthogonal collocation on Chebyshev polynomials spectral method to spatially discretize the partial differential equations of the model. This reduces the order of the discretized model by a factor of 100-1000 compared to finite difference or finite element methods whilst maintaining a similar accuracy. Figure 1 shows the voltage predicted using the spectral method (markers) compared to a finite element solution using Comsol (solid-lines), both are in very good agreement to high C-rates, and the solution time is 50-100 times faster with spectral methods.

Modelling degradation is of utmost importance for automotive applications in order to estimate and predict the capacity and power fade of cells. The loss of lithium and the increase of battery impedance due to the formation and growth of the solid-electrolyte interphase (SEI) are believed to be the major degradation mechanisms in commercial graphite anode-based cells. We coupled our efficient implementation of the thermal-P2D model to a degradation model describing the evolution of the SEI layer thickness [3, 7].

The coupled thermal-P2D and degradation model is efficiently solved in Matlab using a unified control-engineering state space approach. Several techniques are available for the state estimation of such a non-linear state-space model, including the extended Kalman filter (EKF), the unscented Kalman filter (UKF) or moving horizon estimation (MHE). Although the UKF and MHE may provide a more accurate estimation, these are computationally intensive. Instead, we focus on a modified EKF that shows satisfactory performance with lower computational resources requirements. The state estimation algorithm is able to estimate the concentration profiles within the cell and the SEI growth during the cell operation. Due to its relatively low computational requirements, our state estimation algorithm could be solved online in a BMS to accurately monitor and predict SOC, SOH and instantaneous power capability.

This work is funded by Samsung Electronics Co. Ltd. through a Global Research Outreach award. 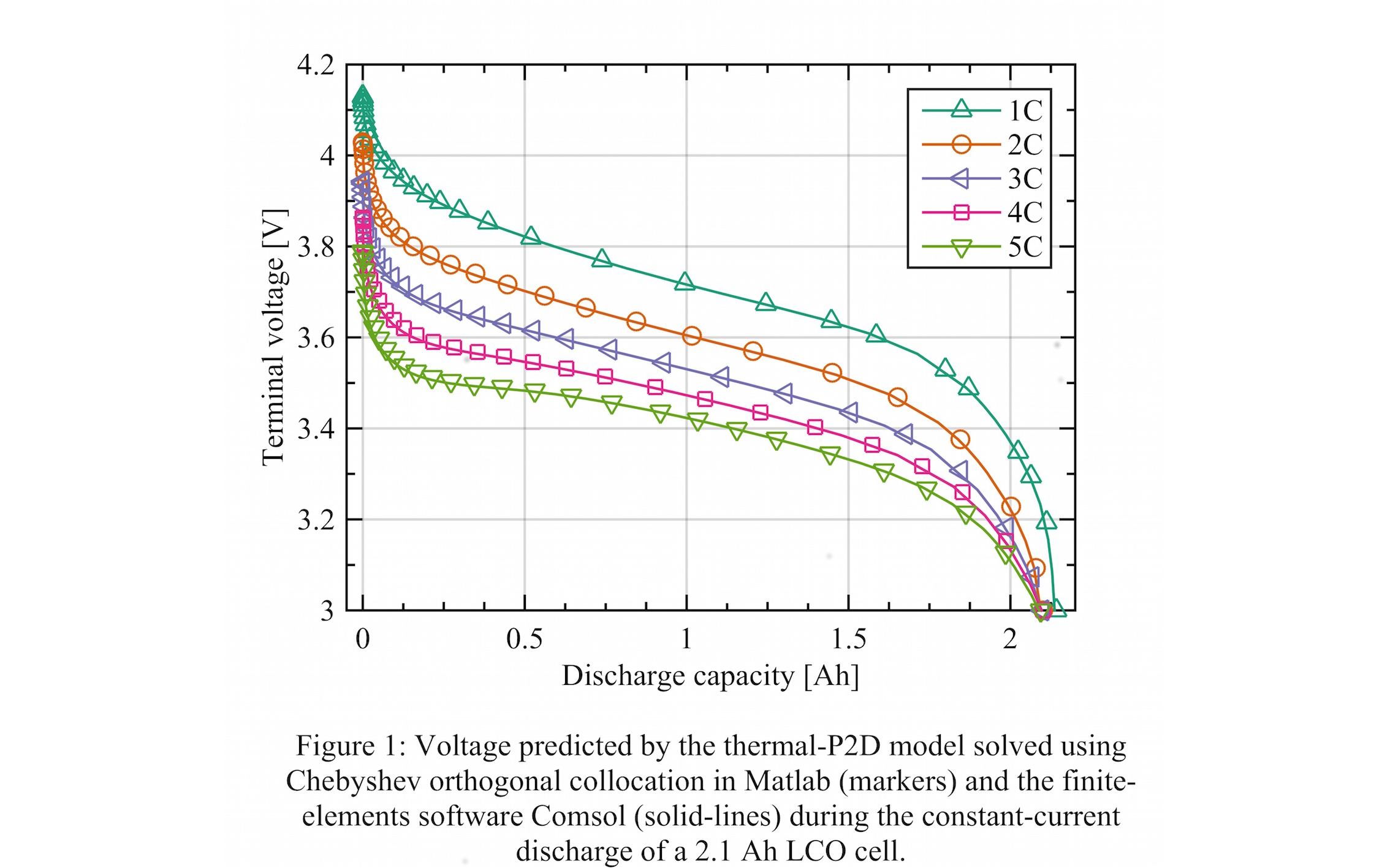