Salon C (Hilton Chicago)
S. A. Odom, S. Ergun (Department of Chemistry, University of Kentucky), C. F. Elliott, A. P. Kaur (University of Kentucky), and N. Holubowitch (University of Kentucky Center for Applied Energy Research)
3,7-Bis(trifluoromethyl)-N-ethylphenothiazine (BCF3EPT) is one of several derivatives of phenothiazine prepared in our laboratory for evaluation as redox shuttles for overcharge protection in lithium-ion batteries.  We varied alkyl substituents at the N position and incorporated electron-withdrawing substituents at the 3 and 7 positions. Derivatives with ethyl and iso-propyl groups at the N position were the most stable, and those with chloro and trifluoromethyl substituents were the most robust in overcharging lithium-ion batteries. BCF3EPT showed the highest rate performance when dissolved at 0.5 to 1.5 M in 1.2 M LiPF6 in EC/EMC in graphite/LFP coin cells. At 0.08 M BCF3EPT, batteries lasted over one year in overcharge at a charging rate of C/10. When compared to dimoethoxybenzene-based redox shuttles, the radical cation of BCF3EPT – generated by chemical oxidation with tris(2,4-dibromophenyl)aminium hexachloroantimonate – was more stable in battery electrolyte. The stability of the radical cation form of redox shuttles is critical to overcharge protection and limited effects of the redox shuttle on SEI formation, so the stability of the radical cation of BCF3EPT may explain its extended performance in side-by-side overcharging experiments. In addition to overcharge protection studies, we also studied BCF3EPT as an electron-donating electro-active material in non-aqueous redox flow batteries including one example in which BCF3EPT and trimethylquinoxilane (TMeQ) were incorporated into 1 M LiBF4 in PC and tested in a stationary coin cell following a setup used by Brushett’s group, testing concentrations up to 0.4 M of both species, the anolyte being the limiting factor in high concentration batteries. Lastly, we have focused on the scale-up of BCF3EPT, which we prepare in three steps from commercially available phenothiazine. So far the first and second transformations have yields of more than 95%, and the last step - the trifluoromethylation – can be conducted in over 90% yield. 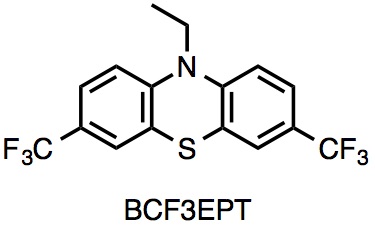