The use of high capacity Si based electrode has been hampered by its mechanical degradation due to the large volume expansion/contraction during cycling. Nanostructured Si can effectively avoid Si cracking/fracture. Unfortunately, the high surface to volume ratio in nanostructures leads to unacceptable amount of solid-electrolyte interphase (SEI) formation and growth, thereby low current/coulombic efficiency and short life. Based on mechanics models we demonstrate that the artificial SEI coating can be mechanically stable despite the volume change in Si, if the material properties, thickness of the SEI, and the size/shape of Si are optimized. Therefore, the objective of this study is to develop a modeling approach to understand, design, and make coated Si anode structures with high current efficiency and stability. For the purpose, in this study, reactive molecular dynamics simulations are conducted to mimic the lithiation process of amorphous Al2O3 and SiO2 covered nanowires. Amorphous SiO2 represents natrally formed oxides on Si nanowire and Al2O3 represents the atomic layer deposition ALD-Al2O3 coating on Si nanowires.

In order to simulate this system, the Li-Si-Al-O parameters in ReaxFF were newly developed, by adding new training sets of DFT results, such as Li ion diffusion energy barrier and lithiation energy in various Li-Si-O and Li-Al-O and Li-Si-Al-O systems (1). After finishing the development of Li-Si-Al-O parameters of ReaxFF, the reactive molecular dynamics simulations were perfrmed on Si core-Al2O3 shell and Si core-SiO2 shell structures surrounded by Li atoms. Behavior upon lithiation to Si core and coating itself were compared for different shell thickness.

More specificly, six simulation sets were prepared to investigate coating and shell thickness effect upon lithiation to Si core. Simulation periodic box size is 78Å×53Å×71Å. The radius of Si core is 7.5Å. The thicknesses of shells are 2.5 Å, 4.5 Å and 7.5 Å for SiO2 and Al2O3, respectively. The length of the core shell cylinder is the same as the length of the y dimension of the simulation box in order to lithium insertion happen only from the side of the cylinder model (Figure 1). The amorphous Si core consists of 478 Si atoms. NVT ensemble is chosen for the simulation and the temperature is 900K.

The coating structural integrity and stability vs. its thickness were investigated. Upon lithiation to Si-core/SiO2-shell, SiO2 shell was immediately lithiated without much volume expansion, followed by the lithiation of Si core. When the thickness of SiO2 is comparable to the radius of Si, the lithiated shell has a few cracks, which cause Si atoms smear out from the Si core. For thinner shell, the SiO2 shell spread out and loses its structural integrity. When it comes to Si-core/Al2O3 shell, it behaves totally differently depending on the thickness of the coatings. When Al2O3 is thin, it behaves like SiO2 shell. It is instantaneously lithiated and subsequently causes rapid lithiation of Si core, which induces sudden volume expansion and gives large stress to the coating. This large stress gets the coating to be broken. When Al2O3 coating is as thick as the radius of Si core, lithiation happens relatively gradually making well defined Li density gradient inside the coating. This gradient comes from the Li migration energy barrier decrease when Al2O3 changes into LiAlO2. In other words, much more Li exist in outer shell compared to inner shell, which makes mechanical property of inner shell region to be stiff, while outer region become soft. This inner stiff region can suppress the lithiated Si core and minimize volume expansion and the coating property which has elastic modulus gradient is strong to external stress therefore, it maintain its integrity at the end of the simulation.

Al2O3 can be used as an excellent ALD-coating material if it is thick enough to hold elastic modulus gradient in it. Based on the simulation results of Al2O3 coated Si, we propose a modulus gradient coating, softer outside, harder inside, is beneficial to avoid coating cracking. 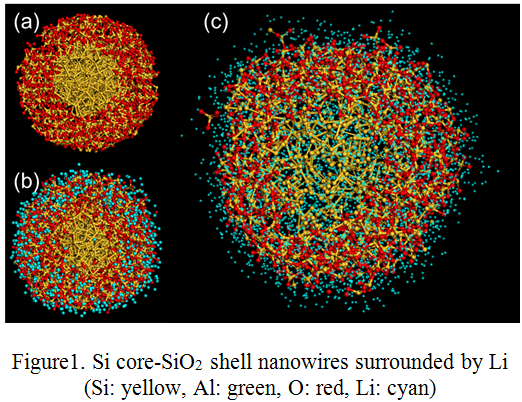