Williford Room A (Hilton Chicago)
A. J. J. Jebaraj, N. Georgescu, and D. Scherson (Case Western Reserve University)
The influence of adsorbed species on the kinetics and mechanism of a number of redox reactions has been recognized for decades1. In particular, the adsorption of both chloride and bromide on Pt electrodes in acidic electrolytes, is known to promote the two-electron reduction of oxygen to peroxide instead of the desired four-electron reduction to water 2,3. This contribution seeks to gain insights into the reduction of H2O2 on a polycrystalline Pt electrode in 0.1 M HClO4 solutions containing a few ppm of either Cl- or Br-. The strategy employed makes use of a chronoamperometric method recently developed in our laboratories to determine independently, the effects of potential, E, and coverage of the adsorbate, q, on the peroxide reduction reaction on a Pt rotating disk electrode, RDE

All measurements were performed in an all-glass, three-compartment cell in a 1 mM H2O2 in 0.1 M HClO4 solution either neat or containing 10 µM NaCl or 10 µM KBr.  Experiments were performed with a rotating Pt ring-Pt disk electrode, Pt|Pt RRDE, (Pine Instruments, (A = 0.164 cm2) using a bipotentiostat (Pine Instruments). A Pt foil and a reversible hydrogenelectrode in the same solution (RHE) were used as counter and reference electrodes, respectively.

Shown in Fig.1 are polarization curves recorded at a scan rate,  ν = 10 mV/s  for a Pt disk electrode  in 0.1 M HClO4 containing 1 mM H2O2in the absence (black curve) and in the presence of either 10 mM NaCl or 10 μM KBr (red curve). In contrast to the rather subtle effects of chloride, the presence of bromide gives rise to a substantial, ca. 0.3 V, shift in the onset for peroxide reduction.

Chronoamperometric curves, i.e. disk current, idisk vs time, obtained in upon stepping the potential from a value Eo, at which its coverage q is negligible 0, to a value Eads at which q attains a finite value are displayed in Fig. 2. The results of these experiments make it possible to correlate the disk current, i, as a function of Eads at fixed q, or as a function of q for a fixed Eadsas illustrated in Panels A and B in Fig. 3, respectively. Implications of these results on the effects of these impurities on the oxygen reduction reaction (ORR) will be discussed. 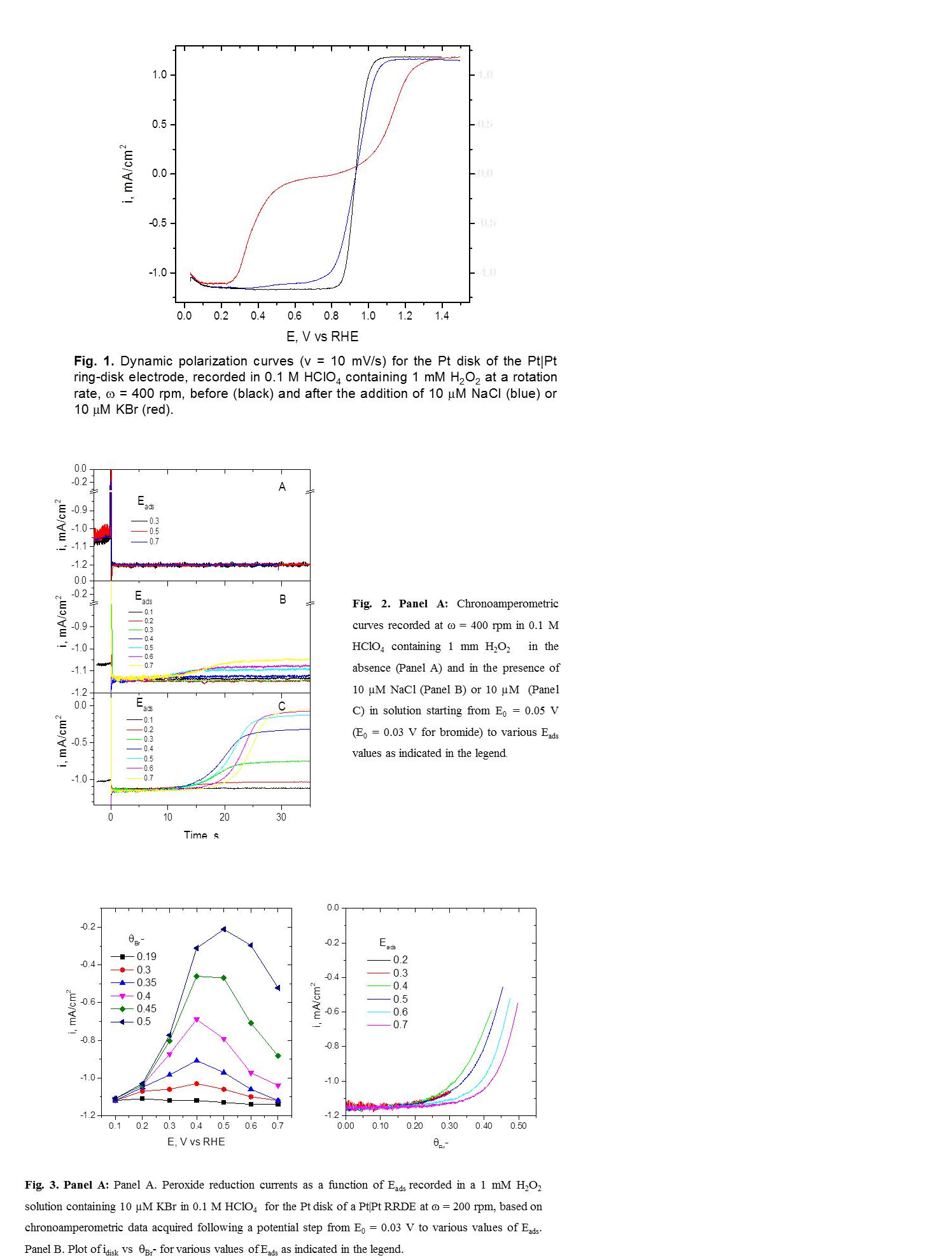